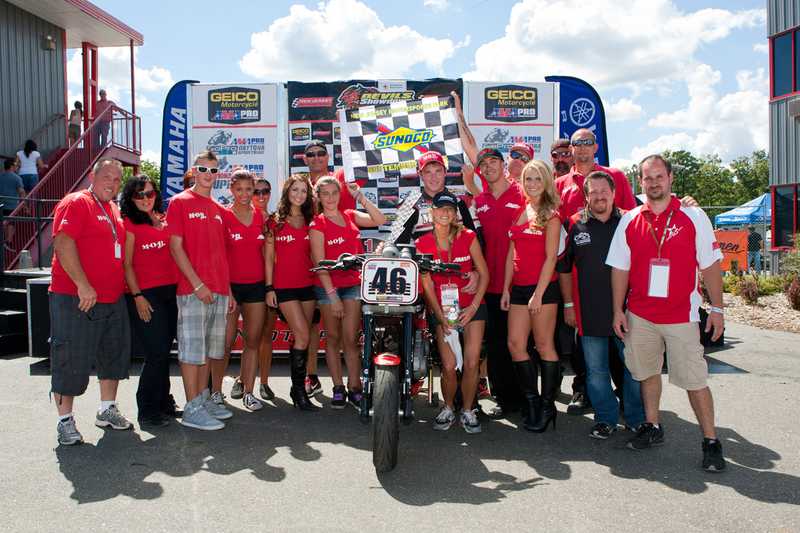 While current team sponsors cover the race weekend costs, the back shop costs and team overhead fell on Teterboro RAMS, which in order to survive must restructure its own operations, and unfortunately MOB Racing’s Vernon, New Jersey, race shop opened a year ago suffers the most by being shut down after the Mid-Ohio AMA round. All employees have been notified personally and every effort is being made to retain them in some way for the remainder of the season.

“Unfortunately, my and Ryan Cino’s attendance and direct participation with the team will be minimal following Mid-Ohio. This is a hard pill for me to swallow personally. A lot of hard work and sacrifices were made by everyone ever involved to get us to where we are today. From volunteers to crew chiefs like Thomas Campion and Tony Braico of Get in Gear who gave 110% of their time, effort and experience. Our success would not have been possible without them especially Tom who is not just an employee of MOB but a friend.

“A huge thank you to each and every AMA Pro Racer that threw a leg over a MOB Racing machine, especially Shane Narbonne who gave the team its first victory after only 8 months of existence at our home track NJMP last season! Having riders like current XR1200 Champ Mike Barnes, former Superbike racer Jake Holden and of course my buddy BSB racer PJ Jacobsen join our team was also a great learning experience for all involved. I hope somehow our existence in the AMA paddock helps bring excitement, enthusiasm, smiles and above all a sense of passion for the most incredible form of Motorsport in the world! Thanks to all our sponsors both past and present, thanks to David McGrath and his staff at the AMA for helping us find our way. Thanks also goes out to the media especially RRW and NMC for helping MOB Racing get its name and news out. And the biggest thank you goes out to our fans! You guys made all the hard work and sacrifices worth it every time you stop by to say hello and we see your worn out MOB Racing shirts and faded hats!

“There’s always hope, and if support comes our way we will be back at it 100%, but for now our presence will be scaled back with the primary focus being to survive this crappy economic period,” says team owner Dennis Espinosa. The team’s primary rider #46 “Insane” Shane Narbonne will continue to attend every round on his MOB Racing XR1200s. Current team and personal sponsors are behind him 100%!

A special thanks goes out to Peter Kline of VETM. (Veterans Empowered Through Motorsports) Last weekend at Barber was our first opportunity to work alongside true heroes, and the team could not have been prouder to have done so! Please continue to support this effort, it really does make a difference in these veterans lives and they will in someway touch your lives in a positive manner. MOB Racing now has two more friends for life from our experience!

More, from another press release issued by MOB Racing:

Eric Stump is the latest to join our XR1200 program for 2013. He will be riding the #77 XR 1200. Eric rode for the team at last season’s home round at NJMP and secured a solid top 10 result even though he had limited time on the bike. Look for Eric to be battling hard at Mid-Ohio! “I like Eric, he’s got great bike skills, he gives good feedback and tries hard, just what’s needed on those bad boys! I wish everyone got to take a lap on one of those XR1200’s, because if you did, then what these guys do on those machines would simply amaze you!” says team owner Dennis Espinosa

Sachsenring: a blank slate or the return of the...
Read more
Feature