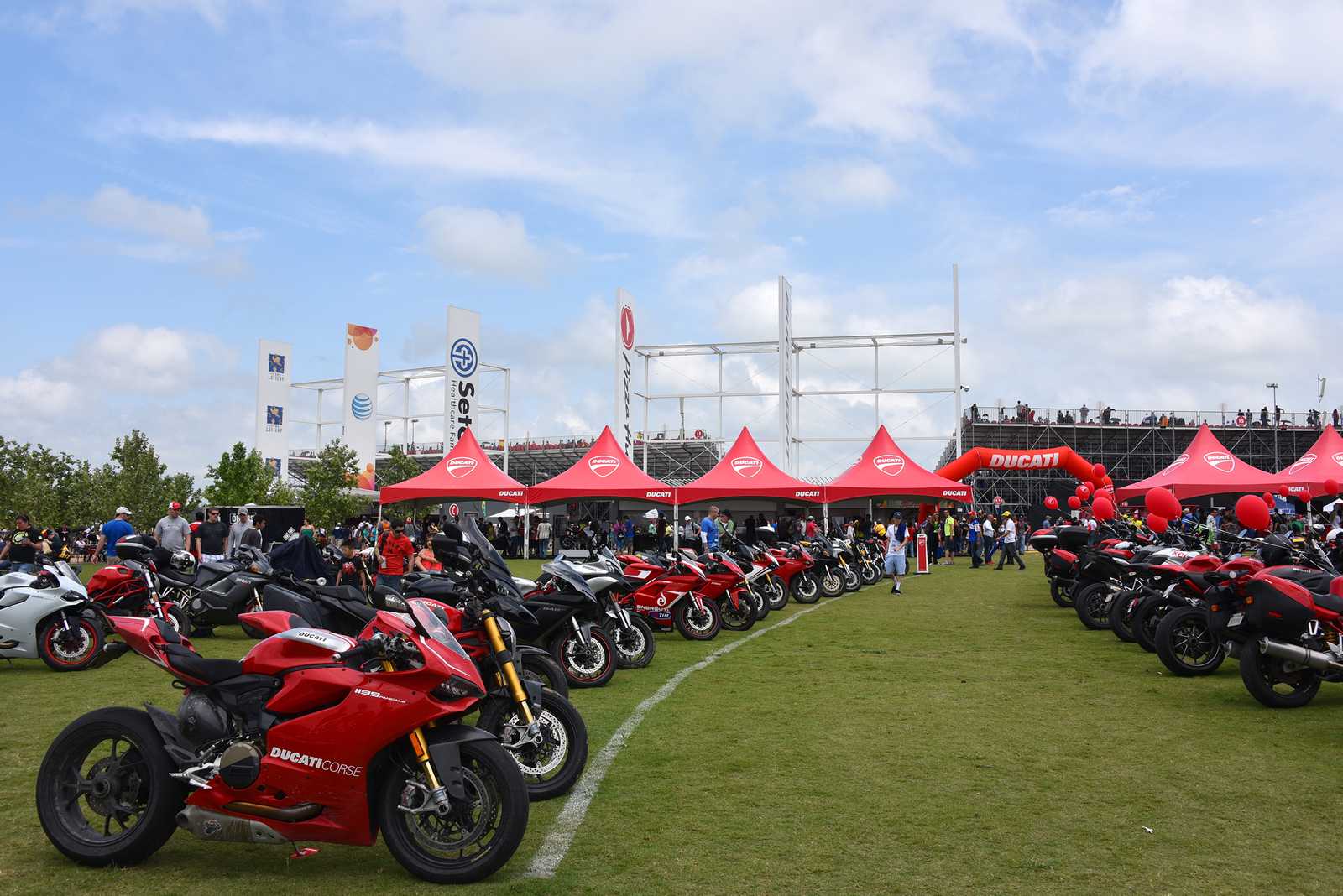 DUCATI ISLAND RETURNS TO CIRCUIT OF THE AMERICAS FOR MOTOGP WEEKEND IN AUSTIN – APRIL 8-10, 2016

Cupertino, Calif. – Beginning April 8, thousands of Ducati fans from around the world will gather to experience Ducati Island at Circuit of the Americas (COTA) in Austin for the one-and-only MotoGP stop in the United States during the 2016 schedule.

Known as a must-stop experience for race goers, Ducati Island has grown into the largest Ducati fan activation at any MotoGP race around the world. The hugely popular Ducati Company Store, presentations by Ducati Master Technicians will all return, with Ducati’s various performance partners, including Öhlins, Pirelli, Brembo and Marchesini. The owner hospitality amenities that riders love will also be there: Ducati Welcome Center, Ducati Gear Check, Ducati Owners Cafe, Ducati Fashion Models, the Scrambler Land of Joy and the Ducati Kids. A new addition is the XDiavel Lounge with the new Ducati XDiavel that is taking the cruiser world by storm.

Additional Ducati activities in Austin include a Ducati MotoGP Party at Ducati Austin on the evening of Thursday, April 7, a Ducati Owners Club Event on Friday evening and the much anticipated Ducati Red Storm Ride early on Sunday morning before the races.

For music Ducati will once again be presenting a main stage for all the action and entertainment. Ducati presents our host and MC, DJ HAPA and live performances from Otis the Destroyer, Moonlight Towers and returning for her 3rd year on Ducati Island, Ms Kimberly Dunn.

On Sunday following the day’s racing, Ducati and COTA are proud to present headliner and American singer and songwriter Franky Xavier Perez! Franky with his backing band, The Truth will perform on the Ducati Island Main Stage to close the weekends racing action. Perez, who has been compared by music critics to Robert Plant and Otis Redding, has collaborated on stage with Slash from Guns-N’-Roses, The Doors, and members of The Cult, Weezer and Velvelt Revolver. Ducati fans may remember Franky as the front man for the Ducati All Stars which played select shows across the West Coast and headlined the 2012 World Ducati Week in Italy. He was also included as a re-occuring live band member of the Sons of Anarchy television series. Currently Perez is the singer for Apocalytica, whose U.S. tour begins this spring.

The three-day Ducati Ticket Package is now available at www.ducatiusa.com.

Ducati Island is located within COTA’s central Grand Plaza. All Ducati owners in attendance will receive entry to the Ducati Owners Hospitality area and the ability to check their gear at no cost.

All these activities and more are fully detailed on the Ducati website at www. http://www.ducatiusa.com/motogp-of-austin

Founded in 1926, since 1946 Ducati has been producing sport-inspired motorcycles characterised by high-performance Desmodromic engines, innovative design and cutting-edge technology. Situated in Bologna, the factory is located in the Borgo Panigale district. The model range covers several market segments with the following families: Diavel, Hypermotard, Monster, Multistrada, and Superbike. In 2015 Ducati presented the Ducati Scrambler: a new brand made of bikes, accessories and apparel that provide the last word in creativity and self-expression. These authentic icons of “made in Italy”, together with an extensive range of associated accessories and technical and lifestyle apparel, are distributed in 90 countries around the world. Ducati competes in both the World Superbike and MotoGP World Championships. In Superbike Ducati has won 17 Manufacturers’ titles and 14 Riders’ titles and in 2011 passed the historic milestone of 300 race victories. Ducati have participated in MotoGP since 2003, winning both the Manufacturers’ and Riders’ titles in 2007.