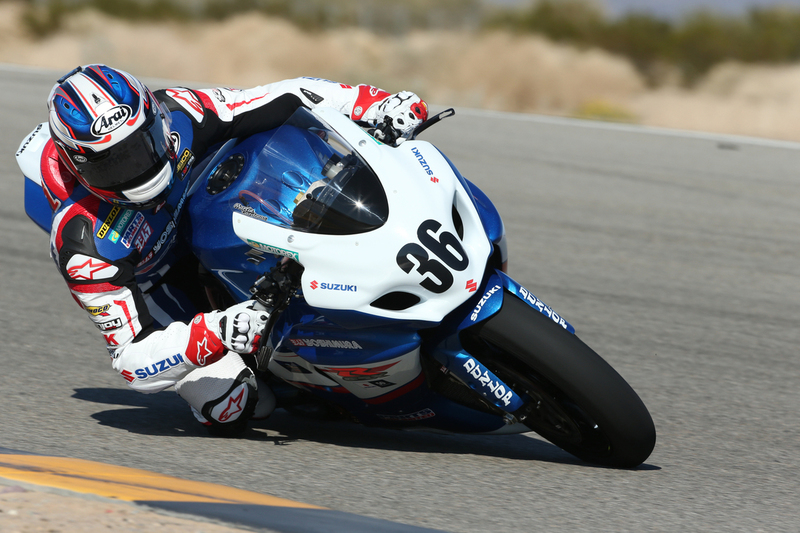 YOSHIMURA SUZUKI FACTORY RACING PRIMED TO DOMINATE AT SEASON-OPENING SUPERBIKE RACE Yoshimura Suzuki’s Martin Cardenas & Chris Clark Ready for Daytona CHINO, CA (March 7, 2013) – The 2013 AMA Pro Superbike season holds nothing but promise for Yoshimura Suzuki Factory Racing. Fielding new rider Martin Cardenas and returning rider Chris Clark on championship-winning Yoshimura Suzuki GSX-R1000s, the team is eager to go racing at the season-opening round of the series next week at Daytona International Speedway in Daytona Beach, FL. Leading the charge for the Yoshimura Suzuki squad is two-time AMA Pro Daytona SportBike Champion Cardenas. Not only did Cardenas win the 600cc title in 2012, he also picked up eight wins in the process. The year prior, Cardenas raced the premier Superbike class, finishing sixth and fourth at the Daytona races. Now, the Colombian racer is looking forward to returning to the Superbike class and to the first race of the season at Daytona in particular. “We’re working really hard to get ready for the first race at Daytona,” said Cardenas. “I’ve been getting familiar with the Yoshimura Suzuki GSX-R1000 and I’ve found it to be incredibly powerful. My goal for Daytona, and also for the year, is to try to fight for the win or podium positions in each race. Right now I have, if not the best team in the paddock, then one of the best teams, behind me, and that gives me a lot of confidence going into the season-opening round.” Like Cardenas, returning Yoshimura Suzuki rider Clark is looking toward the upcoming Daytona race with enthusiasm and anticipation. In 2012, Clark captured his best qualifying time of the season at Daytona. He also picked up two top-10 finishes in the Superbike races. In the weekend’s second race, Clark celebrated a season’s best seventh-place result. Heading to Daytona in 2013, the Yoshimura Suzuki rider is hoping to take his performance to the next level. “Every year I’ve felt like I’ve improved and I want to keep that going, starting with Daytona,” said Clark. “I think that my new fitness regimen will help elevate that. This year, the AMA Pro Superbike field is really stacked with top-caliber riders. At Daytona, I’d love to get on the podium and be battling with those guys up front. It’s definitely going to be a challenge but it’s one I’m up to and look forward to.” The Yoshimura Suzuki Factory Racing team will once again aggressively campaigning the championship-winning Yoshimura Suzuki GSX-R1000 in the 2013 AMA Pro Superbike Championship series, which kicks off March 14 – 16 with round one at Daytona International Raceway in Daytona Beach, FL.

About Yoshimura R&D of America: Yoshimura is “The Leader in Performance” and has been for more than 55 years. With unmatched skills, knowledge, and passion for racing, Yoshimura is on the forefront of the aftermarket exhaust industry. Yoshimura pipes are race bred and feature the same legendary performance, fit and quality that has been their trademark for more than five decades. To learn more about Yoshimura and view their wide variety of performance products, visit www.yoshimura-rd.com. About American Suzuki: Suzuki Motor Corporation (SMC) founded The Motorcycle and ATV Division of American Suzuki Motor Corporation (ASMC), Brea, CA, in 1963. ASMC markets motorcycles and ATVs via an extensive dealer network throughout 49 states. ASMC’s parent company, Suzuki Motor Corporation, based in Hamamatsu, Japan, is a diversified worldwide manufacturer of motorcycles, ATVs, scooters, automobiles and marine engines. Founded in 1909 and incorporated in 1920, it has 147 distributors in 201 countries. For more information visit www.suzukicycles.com.