Toronto, ON – The Canadian Superbike Championship will introduce a restructured point system for the 2022 season, adopting a new format that is mostly based upon the widely used “MotoGP style” points structure.

The new system will take immediate effect in 2022, and will be used across all six National championship classes and their respective awards battles.

The old system, in place for the majority of CSBK’s lifespan, featured larger points payouts and was awarded down to 20th place, with the max payout giving 50 points to the race winner. The system also featured a pair of “bonus points” incentives, with a max of four qualifying points being awarded for pole position, while an additional two points were given to the rider who led the most laps on race day.

The new system, used in most FIM series’ including MotoGP, World Superbike, and MotoAmerica amongst others, sees a max of just 25 points handed out to the race winner while points are given out to only 15th place. Unlike the standard MotoGP system, however, CSBK will notably still feature a pair of “bonus points” incentives, keeping the qualifying bonuses from the previous structure while also tweaking the laps led bonus to now award two points to every rider that leads a lap across the line.

The full breakdown of changes can be found below: 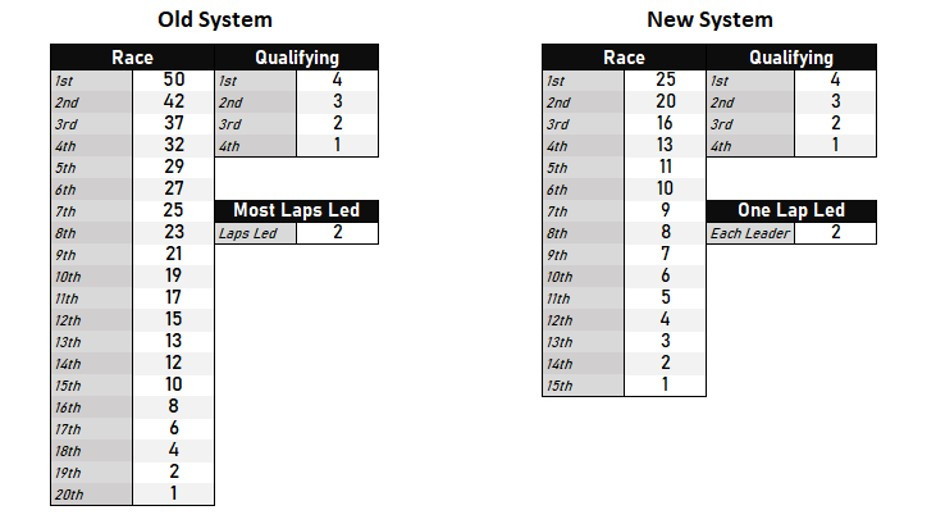 While the introduction of the new system will continue to bring the CSBK circuit closer to its counterparts in the United States and Europe, it is also expected to highlight more exciting championship storylines for fans and competitors. The smaller point payouts will have no direct influence on positioning, but will do a better job of promoting the battles in the championship, as evidenced by the close competition in MotoGP and their feeder series’.

For example, during the 2021 Pro Superbike season, Alex Dumas won the Canada Cup by 31 points over rival Ben Young and a whopping 74 points to Jordan Szoke, with a gap of 159 points covering the top five to Sebastian Tremblay. Under the new system, Dumas would have won the title by just 12 points over Young, with Szoke finishing 44 points back and just 91 points covering the same top five. Notably, none of the positions would have changed inside the top ten under the new structure.

The system would have had a similar effect throughout the six classes, will all five National champions from 2021 remaining the same albeit by finer margins. With bigger crowds and television audiences expected for the 2022 season, the new system is yet another step by CSBK officials to modernize the series and emphasize the thrilling racing Canada has produced in recent years.

The new structure will also coincide with the most anticipated Pro Superbike schedule in recent memory, with the feature class set to run nine races over their four-round slate, featuring doubleheaders in each of the first three weekends before a season-ending tripleheader at Canadian Tire Motorsport Park.

The CSBK riders will have their first opportunity to score a new handful of points when the series returns for round one to the Grand Bend Motorplex, scheduled for June 9-12.