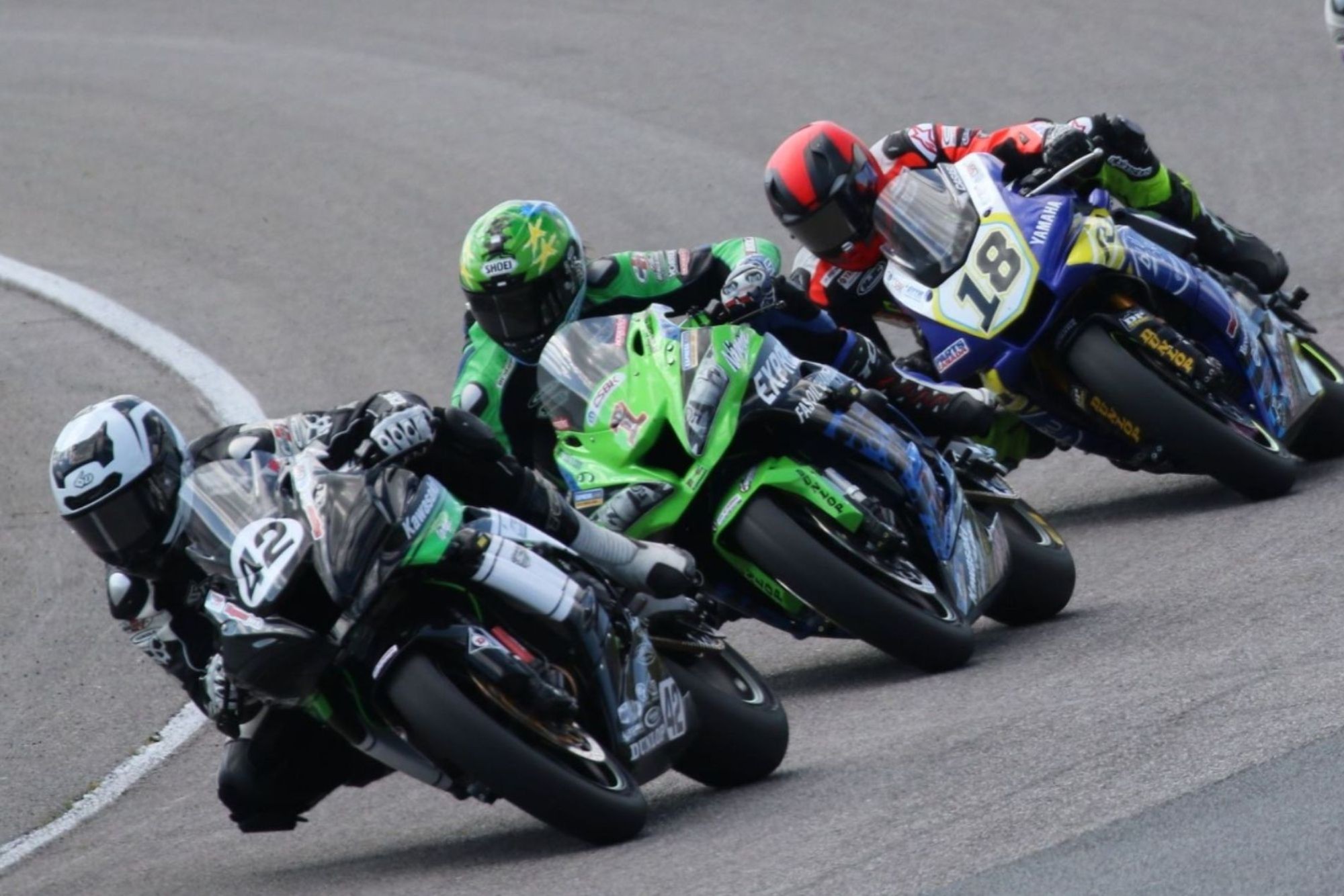 Bowmanville, ON – August 11, 2019 – For the second consecutive season, Kenny Riedmann will exit the Mopar Canadian Superbike Championship with a victory in the final race, winning a thrilling Mopar Pro Superbike battle after a photo-finish result at Canadian Tire Motorsport Park.

The Sturgess Cycle Kawasaki ZX-10RR rider showed his determination early on after crashing out on Saturday, grabbing the holeshot and leading in the early stages with a nine-rider group following close behind. His lead wouldn’t last long, as race one winner Samuel Trepanier later took over the top spot and entered the final lap poised to win his second consecutive race.

Despite stretching that lead slightly, Trepanier came under pressure in the final corner and ran in too deep, colliding with Riedmann on the front straight before a drag race to the finish line between the two and fellow rival Jordan Szoke.

Official protests were filed by two competitors following the controversial finish, though the protest was rejected with the results finalized post-race. These results are still subject to appeal, which would be determined in conjunction with the Motorcycle Confederation of Canada tribunal.

As for Riedmann, the Belfountain, ON rider will end his season ninth in the championship despite making just his second appearance of the year, as he became the fourth different winner of the 2019 campaign – the most in one season since 2013.

“It feels good to be up here. It’s always fun to come back and battle with these guys up front, and Kawasaki was a huge help in putting this together for us,” Riedmann said. “That was definitely one of the more aggressive races I’ve been a part of, and it got a little sketchy at the end, but it’s always nice to put on a good show for all the fans that come out to support us.”

It was double the disappointment for Trepanier on Sunday, who not only missed out on the victory by a hair length but was also penalized five championship points for failing to have the proper series stickers on his bike. Nevertheless, it was a solid weekend for the Blysk Racing BMW S1000RR rider, who will end his year just 20 points behind Szoke for second in the overall standings.

“It’s awesome to see a good race for all the fans. I actually had a really ugly start and thought I might have to settle for seventh or something, but I was able to work my way up and move to the front one by one,” Trepanier said. “I just didn’t have the same pace as yesterday, and I ran a bit wide onto the front straight which really killed my drive, but the BMW was working amazing all weekend and I’m super happy with the results.”

The all-out war at the front of the pack was so close that even Szoke was under the impression he had won, though the 13-time National champion ultimately settled for third aboard his Mopar Express Lane Kawasaki in what was a merciful end to a tough season for the 41-year old veteran.

“They came together and hit on the front straight, and I actually thought I had it. It was a flashback to when I beat Claudio Corti and Kenny a few years back, but I guess I didn’t get it this time,” Szoke said. “The whole Kawasaki program has been great this year, I’ve just cost them with some of my own mistakes, but that’s racing and you don’t win them all. The good part is, it always feel sweeter to get it back the next year.”

Szoke can take solace in knowing he at least beat rival Ben Young, who failed to reach the podium for the first time this season after wrapping up his first National championship on Saturday. The champion entering 2020 was feeling the effects of a Saturday morning crash, but was still able to score a top-five finish aboard his Liqui Moly/Barrie Trim BMW.

Rounding out the top five in his brief return to the CSBK series was fan-favourite Alex Welsh, who debuted the 2020 BMW S1000RR machine this weekend with successful results, as the BMW program looks to build upon its success with Young and Trepanier entering 2020.

It was also an inspiring end to the season for rising star Tomas Casas, who faded towards the end to finish sixth but ran inside the top-three early on, even making passes on Szoke and Trepanier, among others. The Parts Canada Yamaha rider will end his first year aboard a Superbike machine in fourth in the overall standings, as he will enter 2020 poised to join the championship fight alongside his older counterparts.

The Brooklin Cycle Racing Pro Rookie of the Year award officially went to 17-year old phenom Nicolas Meunier, who will end the year tenth overall aboard his Turcotte Performance Kawasaki sport bike after finishing 15th out of 34 entries on Sunday.

Will Hornblower wrapped up his first ever National championship in thrilling fashion on Sunday, finishing in third after a dramatic three-way battle with rivals Casas and Sebastien Tremblay that went start-to-finish with a number of lead changes in the Liqui Moly Pro Sport Bike class.

The final lead change would ultimately go to Tremblay, who completed the doubleheader sweep aboard his Turcotte Performance Kawasaki, though Hornblower understandably dominated the attention after bringing home the title aboard his Bickle Racing Yamaha YZF-R6.

Though his third-place result was actually his worst finish of the year, finishing top-two in every other race, Hornblower was the only rider in any of the five National classes to finish on the podium in every single contest.

“I’m blown away, it’s just so amazing…I’m speechless,” said an emotional Hornblower. “I wanted to bring it home at the top of the podium, but I had to look at the bigger picture. I knew these guys wanted it badly, so I just had to ride my own pace like I have all year, and now I’m walking out of here with a championship.”

Tremblay’s win put an end to what was a difficult season for the Mirabel, QC veteran, who was able to salvage third in the overall standings despite a pair of controversial crashes early in the season.

“It was a really great race. The pace was faster than yesterday right from the start, so I had to work hard to save the tire,” Tremblay said. “My Kawasaki was just perfect all weekend, so it’s unfortunate to not be battling for the title, but it’s nice to end the season running really well.”

As for Casas, the 20-year old fan-favourite was unable to capture a third consecutive championship in the Sport Bike category, but was happy to come away with a strong finish after an equally frustrating start to the year.

“What a fun race! My Parts Canada Yamaha was working really well as always, but I just couldn’t get a drive on Sebastien at the end,” Casas said. “Unfortunately, my mistake in round one cost a real shot at the championship, but Will was so consistent all season and he deserves this. Now I just have to make up for it on the Superbike.”

Hornblower wasn’t the only Yamaha champion of the season, however, as 16-year old Ben LeClair followed in his older brother’s footsteps to claim the TSN Motorcycle Experience Lightweight Sport Bike championship just a year after Jake won the inaugural title.

The bLU cRU Yamaha teenager settled for fourth in the midst of a seven-rider battle for the win, earning himself a new Yamaha YZF-R6 sport bike to ride as an amateur in 2020 courtesy of bLU cRU, as rival Avery Hart secured the race win aboard his WRBF Yamaha machine.

“I wanted to push for a podium, but everyone was so close at the end, I decided to just get in my own space and bring it home,” said LeClair. “This is what we dreamed of since last season, so it feels really awesome. I’m looking forward to hopefully doing the same as an amateur next year.”

Hart held onto the thrilling victory by just a pair of bike lengths over WRBF Yamaha teammate Keegan Gaudet, who will end his year fourth in the overall standings behind fellow teenager Matthew Simpson, who also finished third on Sunday aboard his Evans Racing Honda.

LeClair will ultimately defeat Hart by 20 points, with the hope being that both riders continue their rivalry on bigger machinery next season.

Guerin and Allard enjoyed a thrilling battle from start to finish, but the former was able to play spoiler in the closing stages aboard his Aprilia RSV4RR, as Fortin will hold on to claim the title by just eleven points over his teammate.

Allard was able to make up for the disappointment in the Parts Canada Amateur Sport Bike category, however, finishing second aboard his Turcotte Performance Kawasaki to claim the title ahead of rival and reigning Lightweight champion Jake LeClair.

LeClair entered Sunday needing to put some distance between himself and Allard, but once again was upstaged by a dominant effort from race winner Jared Walker and his Kawasaki machine, with Allard finishing second to top the overall standings by 18 points over his 18-year old counterpart.

Chris Dopke will exit the 2019 season as the recipient of the Parts Canada Hard Charger Award, winning a tie-breaker decision over Andy Chilton as both riders scored eight points apiece. The Honda rider showed the largest improvement in lap time from qualifying to the race over the course of the year, earning the second edition of the award which was introduced in 2018.

Full results from the weekend as well as the entire 2019 campaign can be found on the series’ official website at www.csbk.ca, while results for the still-unofficial Pro Superbike category will be updated in the coming days.

MotoGP: Brno Is A Special Place For Rossi

MONSTER ENERGY YAMAHA MOTOGP BACK ON THE THROTTLE FOR...
Read more
Feature

Portuguese Round Next For KRT Just a few days after...
Read more
Feature

World Superbike: Will There Be A New Winner In Portugal?