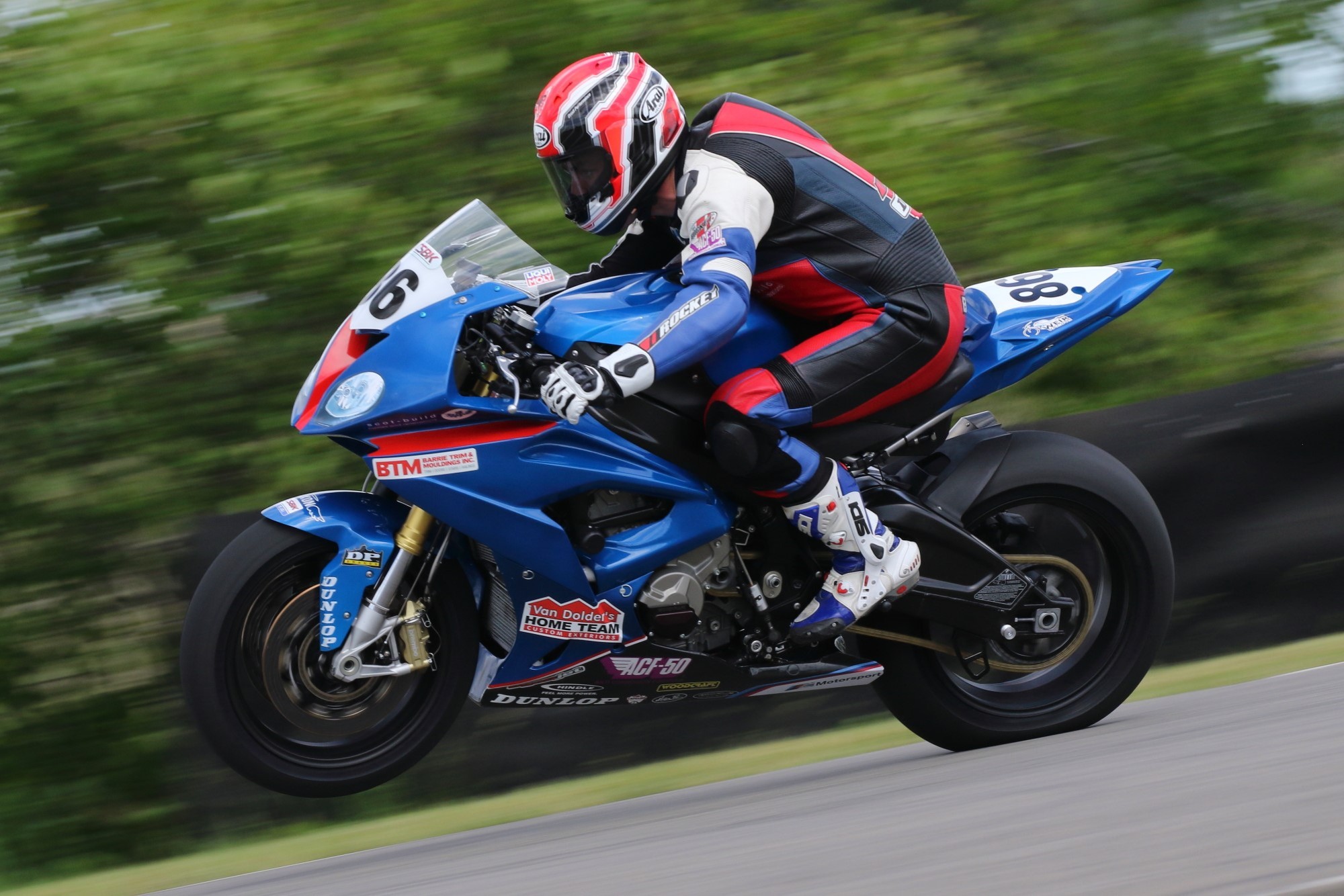 St-Eustache, QC – June 21, 2019 – His streak of early dominance may have come to an end on Friday, but Ben Young was still the fastest man on track as round three of the Mopar Canadian Superbike Championship kicked off at Autodrome St-Eustache.

The Collingwood, ON native entered the final race ever at the historic Quebec circuit with his name atop every leaderboard so far this season, having finished first in all 12 sessions aboard his Barrie Trim/Scot-Build BMW S1000RR to take a 29-point lead in the Mopar Pro Superbike feature class.

However, that streak was ultimately snapped in the morning practice when rival Jordan Szoke topped the charts with a time of 46.825, as the Lynden, ON veteran and three-time reigning champion enters a crucial weekend aboard his Mopar Express Lane Kawasaki ZX-10R Ninja.

Young would ultimately settle for third in that session, with Blysk Racing BMW’s Samuel Trepanier running second-fastest out of St. Isidore, QC, but Young managed to make his absence from the top a short-lived one after posting a time of 46.102 in the afternoon practice to set the fastest overall lap of the day.

The margin to Szoke was miniscule, however, with the 13-time National champion falling just 0.078 seconds short of the current points leader. Szoke was struggling with a lack of grip on the rear tire in the second practice, an issue the Kawasaki team will look to get sorted out before Saturday’s qualifying.

Both he and Young will have their eye on Sunday’s race, as the duo not only enter perhaps the most pivotal round of the season, but will also look to win the last ever Pro Superbike race at the Autodrome before it closes this fall.

The third-fastest time of the day overall belonged to Trevor Daley and his OneSpeed/Fast Company Suzuki GSX-R1000R machine, as the Mississauga, ON native looks to build upon his podium finish from round two and secure another top-three result in La Belle Province.

Trepanier would ultimately finish with the fourth-fastest time of the day, while Inverary, ON veteran Jeff Williams rounded out the top five aboard his BMW machine.

The top rookie of the day was Montreal, QC’s Vincent Levillian, who placed tenth in the morning practice aboard his Turcotte Performance Kawasaki ZX-6R Ninja with a time of 49.017.

Both sessions of the Liqui Moly Pro Sport Bike class were paced by championship leader Will Hornblower, as the Sarnia, ON native posted a best time of 47.639 aboard his Yamaha YZF-R6.

The round one winner was a comfortable 0.736 seconds clear of second place, but just 0.234 seconds separated the next five riders, with two-time defending champion Tomas Casas leading that group aboard his Parts Canada Yamaha out of Peterborough, ON.

Despite an all-Ontario top-three, the class is set to feature a strong contingent of hometown talent, with nine of the next ten riders hailing from Quebec.

Another hometown rider also paced the field in the TSN Motorcycle Experience Lightweight Sport Bike class, as Alex Berthiaume finished with a time of 54.310 aboard his Yamaha YZF-R3 out of Laval, QC.

Leading the Mopar Express Lane Amateur Superbike grid on Friday was another Laval, QC native in Pascal Bastien, who finished with a time of 48.041 aboard his Yamaha YZF-R1. He was notably just 0.119 seconds clear of Blainville, QC’s Guillaume Fortin, who just narrowly defeated Bastien in a thrilling race a year ago and will look to do the same again aboard his Turcotte Performance Kawasaki ZX-10R Ninja.

As for the Parts Canada Amateur Sport Bike ranks, it was championship leader Christian Allard leading the field aboard his Turcotte Performance Kawasaki ZX-6R Ninja, as the Chambly, QC native looks to extend his one-point lead in the series at his home track this weekend.

Full results from Friday’s practice sessions, including the schedule for the weekend’s action, can be found on the series’ official website at www.csbk.ca.