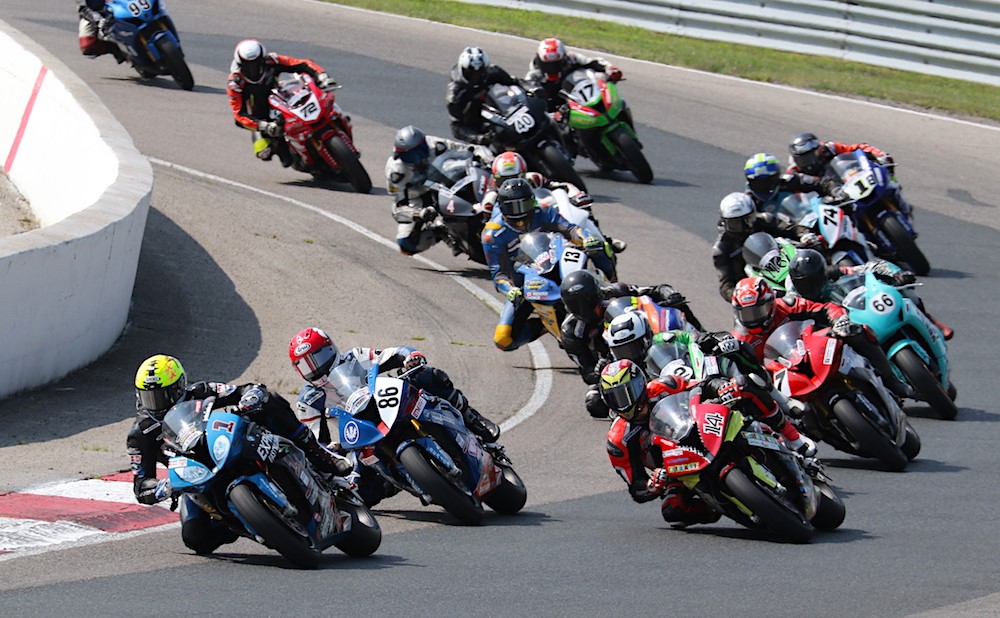 Toronto, ON – December 18, 2018 – The Mopar CSBK Canadian national motorcycle road racing series will include five full weekends in 2019, with a schedule familiar to fans and competitors in Canada.

The series will open slightly earlier than in previous seasons, with the first round of 2019 slated for the outer “Pro” circuit layout at Shannonville Motorsport Park on the Victoria Day long weekend in May. The second-ever round of the Canadian National tour was held at Shannonville’s initial, short “Nelson” layout back in 1980.

In nine of the past 14 years, the winner of the Shannonville Pro Superbike Feature round has gone on to earn the overall National Championship and number one plate. Seven of those times, the rider doing that double was Jordan Szoke of Lynden, ON, the 13 time overall Canadian National Superbike Champ.

In 2019, Szoke will be 40 years old, and rejoin Kawasaki to compete on a Mopar Express Lane-backed ZX-10RR Ninja superbike. For the previous seven years, Szoke has raced for BMW with the successful S1000RR, winning the Championship six of those times.

Round One Shannonville Motorsport Park, ON. – Pro Track May 17 – 19

A special 2019 round for the new-in-2018 Amateur Lightweight Sport Bike category, in conjunction with the VRRA’s Vintage Classic at Calabogie Motorsports Park, ON, has already been announced for June 28-30.

Each weekend of National class racing in 2019 for the Amateur Lightweight Sport Bike category will again incorporate a Double Header format, with points-paying final races both Saturday and Sunday.

The 2019 Series finale at Canadian Tire Motorsport Park, or “old Mosport,” will continue as an all-class double header, including Magneti Marelli Amateur Superbike and Parts Canada Amateur Sport Bike too.

C.T.M.P. first hosted a double header event in 2003 and has done so ever since then. Last year, rising stars Ben Young of Collingwood, ON., and Kenny Riedmann of Belfountain, ON, each scored their first career feature race wins at C.T.M.P.’s showdown weekend.

Young’s success Saturday 2018 at C.T.M.P. meant the title chase went down to the final race, with Szoke taking fourth in the final race to clinch last year’s Championship. In 2019, fourth year superbike rider Young will lead the BMW Canada Motorrad program, as Szoke moves back to head Kawasaki’s effort.

Rising star Tomas Casas of Peterborough, ON., has won the Pro Sport Bike Championship the past two seasons, and will move to Superbike full time in2019 with Yamaha’s YZF-R1 1000cc entry. Suzuki Canada recently announced that Trevor Daley of Mississauga, ON., will lead their effort with the Suzuki GSX-R1000. Daley was a top privateer with his One Speed Kawasaki in 2018.

Meanwhile, the Pro Sport Series for middleweight machinery will crown a new Champ in 2019, since reigning number one Casas will focus on the “big bike” class for Yamaha Motor Canada. Ripley, ON, based Mitch Card has battled Casas in recent seasons, but he too will centre his effort on the Feature division with the R1.

Prior to CSBK’s 2019 start, the RACE organization will offer several warm-up events at Shannonville Motorsport Park, including a Test weekend April 20-21 and the first “Super Series” Regional May 10-12, the weekend prior to the opening National round. Official spec Dunlop tire supplier Pro6 will host a Test Day on the Thursday prior to the start of 2019 National action at S.M.P.

Over the course of the 2019 summer Canadian road race season, series organizers’ Professional Motorsport Productions of Toronto will begin preparations for a busy off season of 2019-2020, when the tour will begin celebrations surrounding the 40th anniversary (red ruby) for the Championship in 2020.