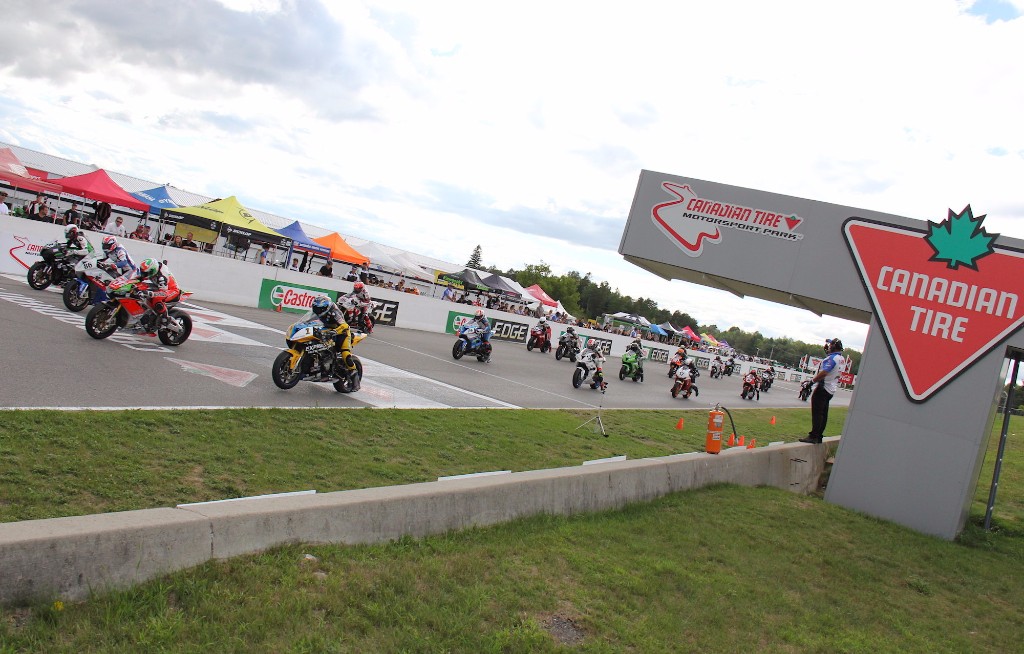 Bowmanville, ON (August 17, 2017) – The 2017 Mopar Canadian Superbike Championship season culminates with the popular double header weekend at Canadian Tire Motorsport Park in Bowmanville, ON this weekend, August 18-20. Championships will be decided during the biggest race weekend of the year in all Pro and Amateur classes.

In the Feature Mopar Pro Superbike class, defending champion Jordan Szoke (Lynden, ON) has a strong 60-point lead going into the final two races of the year. The 38-year-old first topped the podium at CTMP way back in 1999 and has won the last four races at the 3.9-km track, including a pair of hard-fought victories last year en route to his 11th National Superbike Championship.

This year, the battle up front is expected to be a fierce one, with at least a half-dozen combatants eager to break Szoke’s streak at the track and claim a bit of fame. The slip-stream effect on the Mario Andretti back straight keeps the racing ultra-close, particularly amongst those fighting for the lead.

A trio of young 20-somethings has been hungry for Szoke all season, led by Sturgess Cycle/Liqui Moly Kawasaki ZX-10RR rider Kenny Riedmann. The 25-year-old has reached the podium in all five races so far in 2017 and almost managed a win during last year’s Saturday showdown at CTMP.

Behind Riedmann, Bodhi Edie (Warman, SK) and Ben Young (Collingwood, ON) are just six points apart in the fight for third overall and are both expected to contend for wins at CTMP. 21-year-old Edie won here in 2013, and is the only person not named Szoke to win a Superbike race in 2017 after a round 2 victory aboard his Z1 Tuning/Parts Canada Yamaha YZF-R1. 23-year-old Young has experience leading the field at CTMP, as seen in 2016, and is itching for his first career Superbike win on his Scot-Build Developments BMW.

Matt McBride (Mississauga, ON) is always fast at CTMP aboard his Riders Choice BMW, and should vie for the top spot in qualifying. Other riders to watch for in Superbike include Trevor Daley (Mississauga, ON), making his first appearance of 2017 on a well-travelled ZX-10R, Michael Leon (Beaconsfield, QC) on his Royal Distributing BMW, and Yamaha-mounted Mitch Card (Ripley, ON).

For the second consecutive year at Canadian Tire Motorsport Park, Dunlop “Q” tires will be used in Friday’s Dalton Timmis SuperPole qualifying session. Szoke set a new lap record of 1:20.778 in 2016 on these short-life, ultra-grippy slicks.

In Liqui Moly Pro Sport Bike, Tomas Casas (Peterborough, ON) has a commanding 77-point lead going into the always-unpredictable double header at “Mosport.” The Peterborough Cycle/Parts Canada Yamaha R6 rider has won three of five rounds this year, but he should have his hands full with second-place Mitch Card (Ripley, ON), who has shown strong race-day pace all season on his Goderich Toyota/Shoei Helmets R6. Card won both Pro Sport Bike legs of the CTMP double header in 2016.

Championships will also be decided in Magneti Marelli Amateur Superbike, Shoei Premium Helmets Amateur Sport Bike, and the Kawasaki Ninja 300 Race Series. As an added bonus, fans will be treated to an exhibition class, Lightweight Sport Bike, as a teaser to the official class of the same name announced for the 2018 campaign.

Off the track, Jordan Szoke’s Extreme Show will include freestyle motocross exhibitions throughout the weekend. Additionally, fans at CTMP will have a chance to win one of six Toronto Argonauts Family Packs for a remaining Argos home game.

Tickets are $20 for Friday, $30 for Saturday and $35 for Sunday. Children under 16 are free with paid adult admission. For more ticket information, visit www.canadiantiremotorsportpark.com.

(BOWMANVILLE, Ont.) Canadian Tire Motorsport Park (CTMP) is set to host Canada’s top motorcycle road racers August 18-20 as they compete for the national Mopar Canadian Superbike Championship. The weekend event features the final two races of the 2017 season and will showcase a number of championship battles.

“We are thrilled to be hosting another Superbike Doubleheader Weekend at Canadian Tire Motorsport Park,” said Myles Brandt, President and General Manager, CTMP. “With 2017 marking the 50-year anniversary of the FIM Road Racing World Championship Grand Prix, we proudly celebrate a momentous year within the motor sport community.”

New for 2017 at CTMP is Jordan Szoke’s Extreme Show set to perform a high-adrenaline freestyle motocross show on Saturday and Sunday. Unlike traditional motocross, freestyle places more emphasis on the abilities of the daredevil riders who perform mesmerizing jumps over a stretch of up to 75-feet, providing a fun and unique experience for race fans to watch. With the purchase of an event ticket, fans can enjoy the exciting off-track action and have access to paddock areas, CTMP Marketplace, Pinty’s Trackside Grill and the CTMP Official Merchandise Trailer.

Various ticket packages are available for purchase, including single-day tickets for each day of the weekend, general & RV camping, and a VIP hospitality package for those who would like to be closer to the action in style. For more information on tickets and pricing, please visit canadiantiremotorsportpark.com.

Since 1961, Canadian Tire Motorsport Park has been the leading racing and automotive performance facility in Canada, hosting series’ ranging from international sports cars to NASCAR on the renowned 3.957-kilometre Grand Prix track. The state-of-the-art facility provides an engaging space suitable for any event; whether you’re here for the on-track racing action or a personal celebration, CTMP offers the flexibility and capacity to accommodate any event.