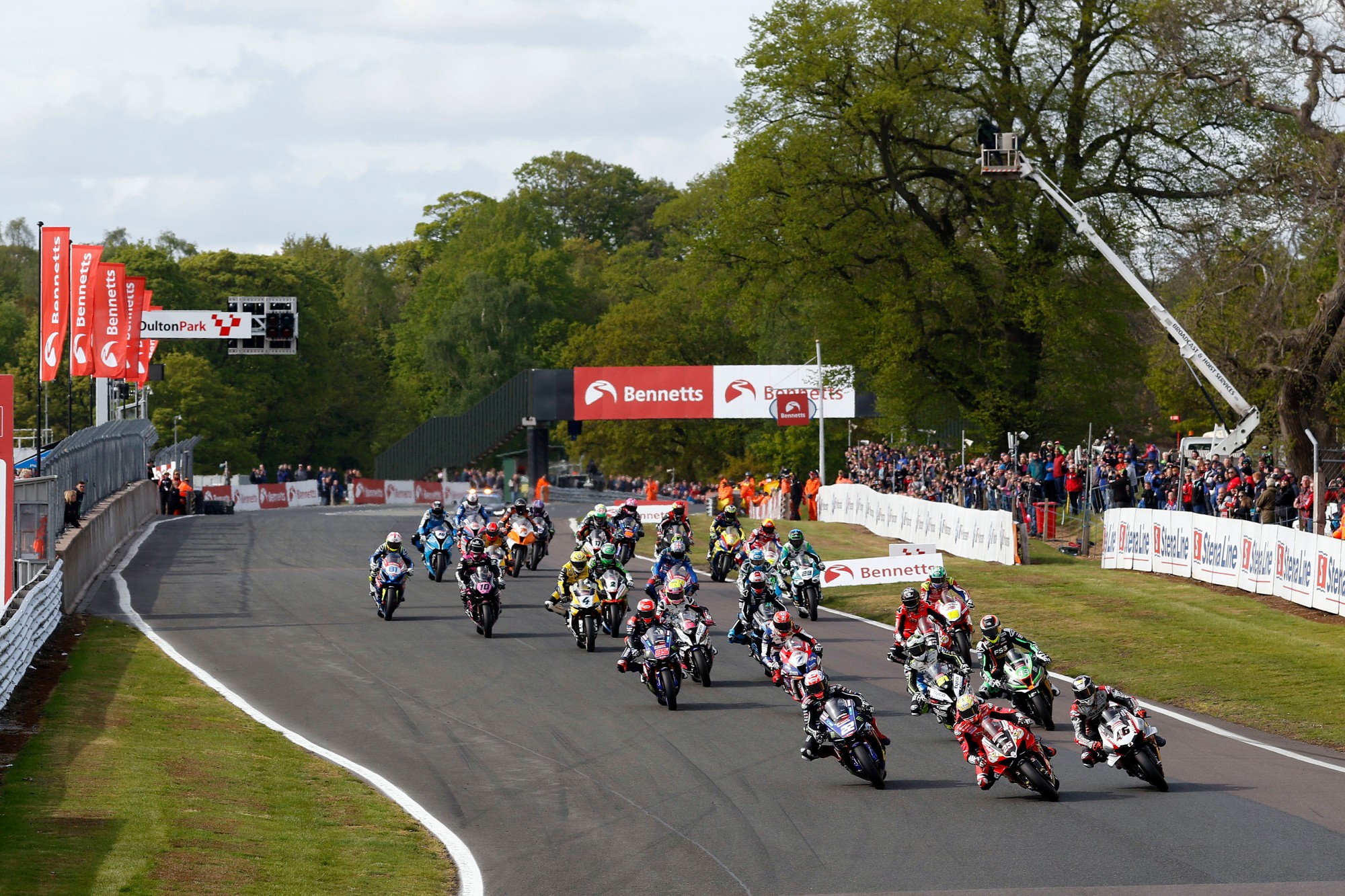 Editorial Note: American Brandon Paasch, riding his FPW Racing KTM, finished second in Motostar (a.k.a. Moto3) Race One at Oulton Park. Paasch finished 8.767 seconds behind winner Dan Jones, who rode a City Lifting R5 Racing KTM. With his finish, Paasch pulled into a tie for the championship point lead with Asher Durham, who was third in Race One.

Race One Results (all on Pirelli tires):

More, from a press release issued by MotorSport Racing Vision:

Josh Brookes maintained his winning momentum at Oulton Park to claim his seventh Bennetts British Superbike Championship victory of the season, extending his podium points advantage to six in a dramatic opening race of the triple-header weekend that saw Danny Buchan confirmed in the Showdown.

There was drama for Honda Racing before the start of the race when Xavi Forés crashed out on the sighting lap to the grid; the Showdown hopeful returned to pitlane and the team turned him around in time to start from very back of the grid alongside teammate Andrew Irwin.

The race began with a sensational start from Bradley Ray who launched into the lead on the opening lap, but Brookes had moved ahead by the time the pack streamed down Lakeside for the first time.

However a crash on the third lap involving David Allingham, Shaun Winfield and Andrew Irwin ruled the Honda Racing rider out of the race and the chance to score any points towards his Showdown bid.

A lap later and Peter Hickman was another rider fighting for a Showdown place to crash out of the race; the Smiths Racing BMW rider limped back to pitlane and then Dan Linfoot also crashed out in a separate incident and the race was red flagged.

The Smiths Racing BMW team rushed to turn around the damaged machine but Hickman was not able to make the restart. However, his bid for a Showdown place is still very much alive with just a single point between him and Andrew Irwin ahead of tomorrow’s two final races of the main season before the three Showdown rounds get underway.

On the restart Brookes got off to a lightning start from the front row and was ahead of Tommy Bridewell, Ray and Christian Iddon, who is also on a quest to secure a Showdown place for the first time. Jason O’Halloran though was fighting hard on the leading McAMS Yamaha and he made a move ahead of Iddon on lap two.

Bridewell then moved into the lead of the race on the fourth lap, but there was heartbreak for Oxford Racing Ducati when two laps later he was forced to retire with a technical problem as he aimed for the team’s first race win.

That put Brookes back in command at the front of the pack with Ray in hot pursuit with Buchan, O’Halloran and Iddon in the chasing pack with Scott Redding holding sixth place ahead of Tarran Mackenzie. By lap eight, Redding had made a move on Iddon to move up the order as O’Halloran had dropped back behind the Tyco BMW.

Redding was hounding Buchan and on lap 12 a moment for the FS-3 Racing Kawasaki rider gave his Be Wiser Ducati rival the invitation he needed to make a pass and move into third place with two laps remaining of the 14-lap restart.

Brookes held the lead at the chequered flag to extend his advantage over a confident Redding ahead of tomorrow’s two races, but there were big celebrations for Buildbase Suzuki and Ray who claimed their first podium finish of 2019 in second place ahead of Redding.

Buchan’s fourth place secured both his and the FS-3 Racing Kawasaki team’s first Showdown fight, holding off Iddon and O’Halloran. The result for Iddon in race one, and the disaster for Andrew Irwin and Hickman, has now put him to within ten points of sixth place in the standings.

Tarran Mackenzie was eighth in the opening race and has 13 points advantage over Andrew Irwin ahead of tomorrow’s two races.

Alex Olsen had an impressive debut for Smiths Racing BMW in ninth ahead of Ryan Vickers in tenth.

*Riders in bold – confirmed in the 2019 Showdown

“Every race is important; we’re heading into the Showdown after this round so every point’s critical. It was a difficult race; obviously the stop-start added an element with the tyres, but it’s the same for everyone.

“I tried as hard as I could to make a break and control the race but Tom’s [Bridewell] pace was really strong. When he came past I thought ‘oh this is good, I’ll just see if I can follow him for a while’ and he was riding really, really well. Not only fast but it looked really in control, no dodginess or aggression, it was just controlled.

“I was like ‘well, this is going to be a race threat’ and then unfortunately I don’t know what happened but his bike stopped. I was actually in the slipstream at the time and it really gave me a shock, but fortunately no-one collected with him and then I had Brad right there for a number of laps. I was pushing really hard and I could feel the tyres starting to give trouble and I just kept seeing zero on the board so I knew Brad was right there.

“I just pushed on and finally I was able to see a little gap on the board starting to show and just happy to bring it home. Credit to him, he’s obviously riding really well again himself because we’ve seen before how strong he can be.”

“I am so pleased; I am over the moon, to be in the Showdown. It did seem like today has been against me since waking up!

“I crashed on oil in Q1 and then didn’t get back out in qualifying, so we ended up being down on track time which wasn’t ideal. But then I got a great start in race one from all the way back on the grid.

To be honest I think races where you start towards the back and then have to work your way through are usually some of the best races of your career and that is what it was like today.

“Then after the red flag I started ninth for the restart and that was obviously better. The bike felt different today after some big set up changes which was a bit of a stab in the dark with the set-up.

“I had a small problem towards the end of the race which meant Scott Redding went past and I missed out on a podium, but then I had a little off on the in lap – you just couldn’t make this stuff up!

“We’ll make some changes tomorrow; me and my bike will have a few words tonight and rekindle our relationship! But big credit to FS-3 and the team for all their hard work, they deserved it today!”

Be Wiser Ducati’s Josh Brookes got round nine of the Bennetts British Superbike Championship at Josh BrookesOulton Park underway in fine style today when he followed up his double at the Cheshire track earlier in the season with his seventh win of the series to extend his championship lead.

And making it a good day for Paul Bird’s team, there was further joy for the Penrith-based squad at their local circuit with team-mate Scott Redding joining him on the podium in third.

Both riders had enjoyed productive practice sessions on the factory-backed Be Wiser Ducati Panigale V4 R with Australian Brookes quickest in both of the dry sessions, the second of which saw him lap comfortably inside the lap record, whilst Gloucestershire’s Redding wasn’t too far behind in fourth overall.

It meant both of them were in confident mood ahead of this lunchtime’s Datatag Extreme Qualifying session which would determine the grid for the opening race later in the afternoon. Both riders successfully made it through to the final Q3 section but it was a scintillating lap of 1m 33.939s from Brookes, which was half a second inside the lap record, that saw him claim his fourth pole position of the season, two places ahead of Redding who completed the front row.

Conditions were again good for the 18-lap race later in the day but the first attempt at running the race was stopped after four laps due to a number of incidents. Cut to 14 laps, the re-start saw the two riders suffer differing fortunes as Brookes grabbed the lead whilst Redding slipped back to seventh.

Two groups quickly emerged with Brookes battling with Tommy Bridewell and Bradley Ray and Redding dicing with Danny Buchan, Christian Iddon and Jason O’Halloran with both ultimately coming out on top of their respective battles.

Bridewell had taken the lead from Josh before hitting trouble on the sixth lap and, after then successfully seeing off the challenge of Ray, Brookes swept to his seventh win of the season by almost five seconds. Redding, meanwhile, soon got into his rhythm and picked the riders off in front of him one by one to take third place and the final position on the podium.

Josh Brookes: “My lap in qualifying was a personal best so I’m pleased that I’m still improving, and the bike was being kind, working like I want it to work. The stop-start race was difficult as it’s hard to manage the tyres in that situation whilst both Tommy and Brad were riding really well, and I had to push really hard. Unfortunately for Tommy, he went out, so I dug deep and managed to break Brad’s challenge and with every point being critical at this stage of the season it’s great to take another win.”

Scott Redding: “Being on the front row was a massive help today and it helped me feel more relaxed and Scott Reddingmore confident going into the race where I felt really good especially in the first start. The grip felt good and I thought I could go with the front guys but on the re-start, I had to roll off going into the first corner and lost ground. I was also struggling with the rear tyre and it was hard to know how hard to push but once I got into my rhythm and could run my own lines, I was able to move forward and it’s good to take my first podium at Oulton.”

Johnny Mowatt, Team Co-ordinator: “It’s always challenging having a race on Saturday so soon after qualifying and it’s vital not to have any crashes so you can put yourself in the best possible position. From that point of view, it worked out well for us and the race ended up with another win for PBM Be Wiser Ducati and vital podium points for both riders which has allowed us to open up a bit of a gap over the other riders. Both riders are in a good position for tomorrow’s first race and we’ll be looking for similar results in the two races.”