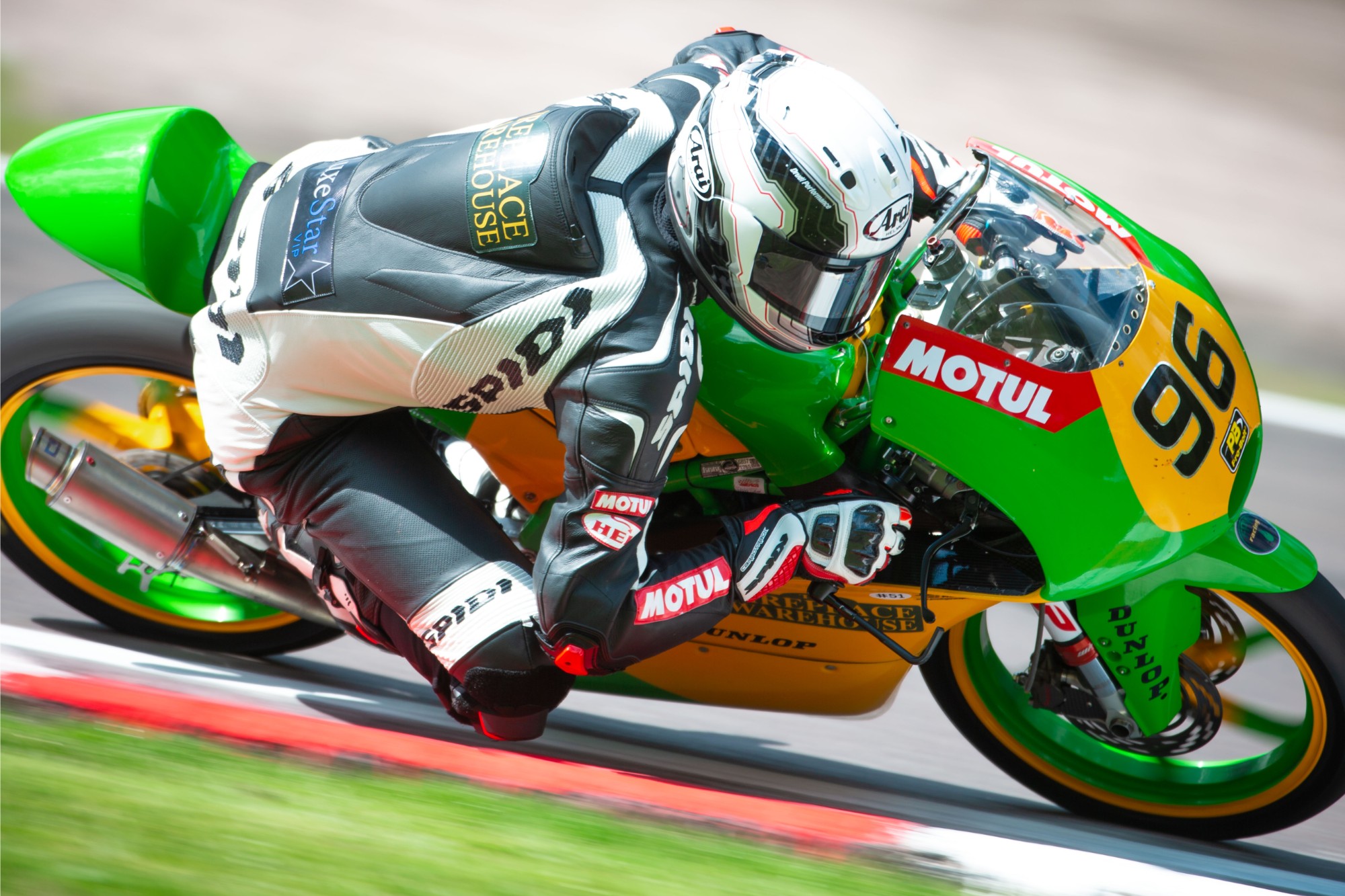 Brandon Paasch and FPW Racing worked together perfectly to take a double win at the opening round of the HEL Performance British Motostar Championship at Oulton Park this past weekend. Hitting the front of the pack from the first practice session, Brandon consistently improved his lap times and qualified second for the races. In the first wet race, Brandon launched well and ran just behind the leader, then inherited the lead when the front runner slid off the track. Controlling the pace and setting steady fast laps, he claimed the first-ever American rider win in Moto3 GP by two seconds. Following up in the second race which was cool but dry, Brandon again started well and ran strong in the front pack, dicing for the lead during the first half of the race. With two laps to go, he built a gap on the following riders and brought home the second win of the weekend, scoring a perfect 50 points to establish his lead in the championship.

“I still can’t believe what an amazing weekend that was! I flew home the day after the races, and I’m still pumped up from taking the double win at Oulton. It feels so good to be back on top of the podium after working so hard the past three years. It might have been a bit bumpy at times, but everything that I’ve done, and everything that has happened, has made me stronger. For sure, the races were challenging, but I knew I could keep the pace and go for the win. In both races I kept an eye on my pit board and was ready to pull the pin at the end to be the first to the checkered flag. It was so cool to hear the American anthem play at the podium ceremonies; I think it’s the first time in a while, at least since Tommy Aquino last won a race over here.

The best thing so far has been joining FPW Racing this year. Adrian and the whole team have done such an amazing job to get the KTM Moto3 GP bike in top shape and make me feel so welcome on the team. That, along with my experience on the UK circuits last year, have really let me push myself further on the KTM. I have to give a huge thanks to all the crew on the FPW Racing team for their hard work, and to Birdhouse Training for driving me to improve myself. Thanks to my sponsors too – Electronic Concepts, luxeStar VIP, Smooth CBD, Arai, and Spidi. Without the support of sponsors and friends, I wouldn’t be able to be where I am today.” (Brandon Paasch)

“I have to echo what Brandon has said – what an amazing weekend! The whole FPW Racing team really came together to give Brandon everything he needed to take the double wins and leave with the championship lead. Brandon rode with extreme maturity, reading his pit board and controlling the pace from the front, and the team worked well together both in the garage and on pit wall. I couldn’t have asked for any more from anyone.” (Adrian Mason, Team Owner)

The next round for the HEL Performance British Motostar Championship will be at Brands Hatch GP on June 14-16. Follow Brandon and FPW Racing and get all the results at www.britishsuperbike.com. In between rounds, Brandon will compete in MotoAmerica Supersport with TSE Racing at Road America May 31 – June 2. Live timing and video can be seen at www.britishsuperbike.com.