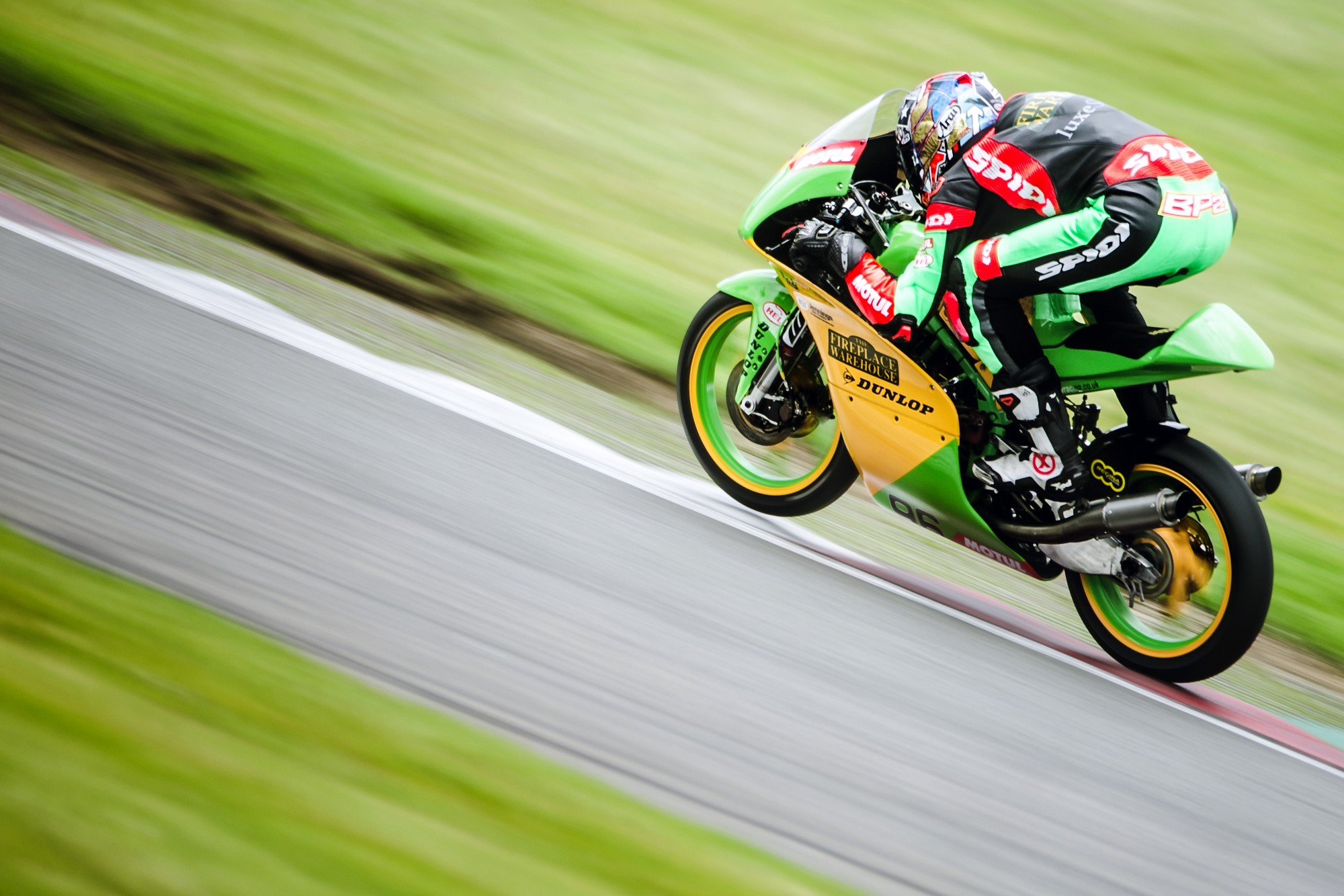 After a six-week intermission, Brandon Paasch and FPW Racing returned for the second round of the 2019 HEL Performance British Motostar Championship at Brands Hatch GP Circuit. The team’s plan was to continue the success they had in the first round at Oulton Park, where Brandon took both wins on the KTM Moto3 GP racebike. Starting strong in practice, Brandon and the team improved each session, ending up third at the end of the second practice session. With clouds overhead, Brandon quickly set a fast pace in qualifying while the track stayed dry, securing Pole starting position on a final flying lap.

Race 1 set off again in cloudy and cool conditions, but a poor start saw Brandon swallowed up in Turn 1 and pushed back to 7th place on the first lap. Putting his head down and working hard to regain the front, he set consistently fast lap times and made it back to the front of the pack by the fourth lap to chase down the leaders. But the gap was too big, and Brandon and the team worked to secure a second place finish that helped increase his championship points lead.

In Race 2 on Sunday, Brandon launched well and was immediately fighting for the lead from the first lap. The battle for the lead was intense, with several competitors vying for the front spot. Brandon took the lead on Lap 6, but was quickly slowed by the Safety Car when a couple racers crashed hard while chasing Brandon. The Safety Car was pulled in two laps later, and Brandon promptly dropped his lap times and managed his control at the front to bring home his third win of the season.

“I almost don’t have the words for how amazing I feel after this weekend! Usually I’m pretty calm and focused when I get ready on the starting grid, but I was definitely feeling some extra energy with the team at Brands Hatch GP. Practice went well, and I quickly felt comfortable again back on the KTM Moto3 GP bike after riding the TSE Racing Yamaha R6 in MotoAmerica Supersport at Road America. It was a long break from Oulton, and I was eager to get back to business here in the UK in the HEL Performance British Motostar Championship.

“We got up to speed quickly in practice, and I just took most of the sessions to fine tune some of my lines and feel out where we could improve the bike setup. There was a touch of rain at the end of P1, so Adrian waved me and Jamie in early. P2 was a really good session, and we picked up some speed. I felt confident on the bike in qualifying, and to see that we took Pole for the weekend on my last lap was really cool!

“For Race 1, I screwed up the start and dug myself a good hole that I had to climb out of to get back to the front. Again, I felt so comfortable on the bike that I was able to set some fast laps and make good moves around the other racers. Unfortunately, the leader had gapped us too big, so I brought the bike home in second place as part of our team strategy to focus on the championship. In Race 2, I was determined to make a better launch, and I got settled in with the lead group right off the start. It was fun dicing with the leaders for the first few laps, but I saw a chance to make a move, and I pushed into the lead to see if I could move away from the group. I was surprised to see the Safety Car come out shortly after I took the lead, but my team let me know on the pit board what happened with the downed riders. Once the Safety Car moved off, I cleared my head and worked on setting consistently fast laps. I saw on my pit board that I had a decent gap, and I managed that for the last few laps to take home another win. I was so stoked that I could hardly wait to get back to the pits to thank my team – I’m still really pumped up! Thanks to Adrian, Sarah, Andy, Dave and all my sponsors and supporters for helping me all weekend, I can’t wait for the next round at Knockhill!” (Brandon Paasch)

“It’s good to have Brandon back here, and the whole team is really excited about our results so far. We’re getting the KTM Moto3 GP racebike dialed in, and every session we get great feedback from Brandon to make some adjustments. The whole crew pitched in and stepped up again this weekend, but we know that we still have a while to go in the season. Our goal is to maintain the championship lead, and we’ll stay focused on that for our next race weekend. Thanks to all the fans that stopped by our pits – we really enjoy meeting them and taking pictures with Brandon and the racebike!” (Adrian Mason, Team Owner)

The next round for the 2019 HEL Performance British Motostar Championship and Bennetts British Superbikes series will be June 28-30 at Knockhill Racing Circuit in Fife, Scotland. To follow the races and get the latest updates with Live Timing, download the Bennetts British Superbikes app in the iTunes or Google stores, or watch all the action at www.britishsuperbike.com.