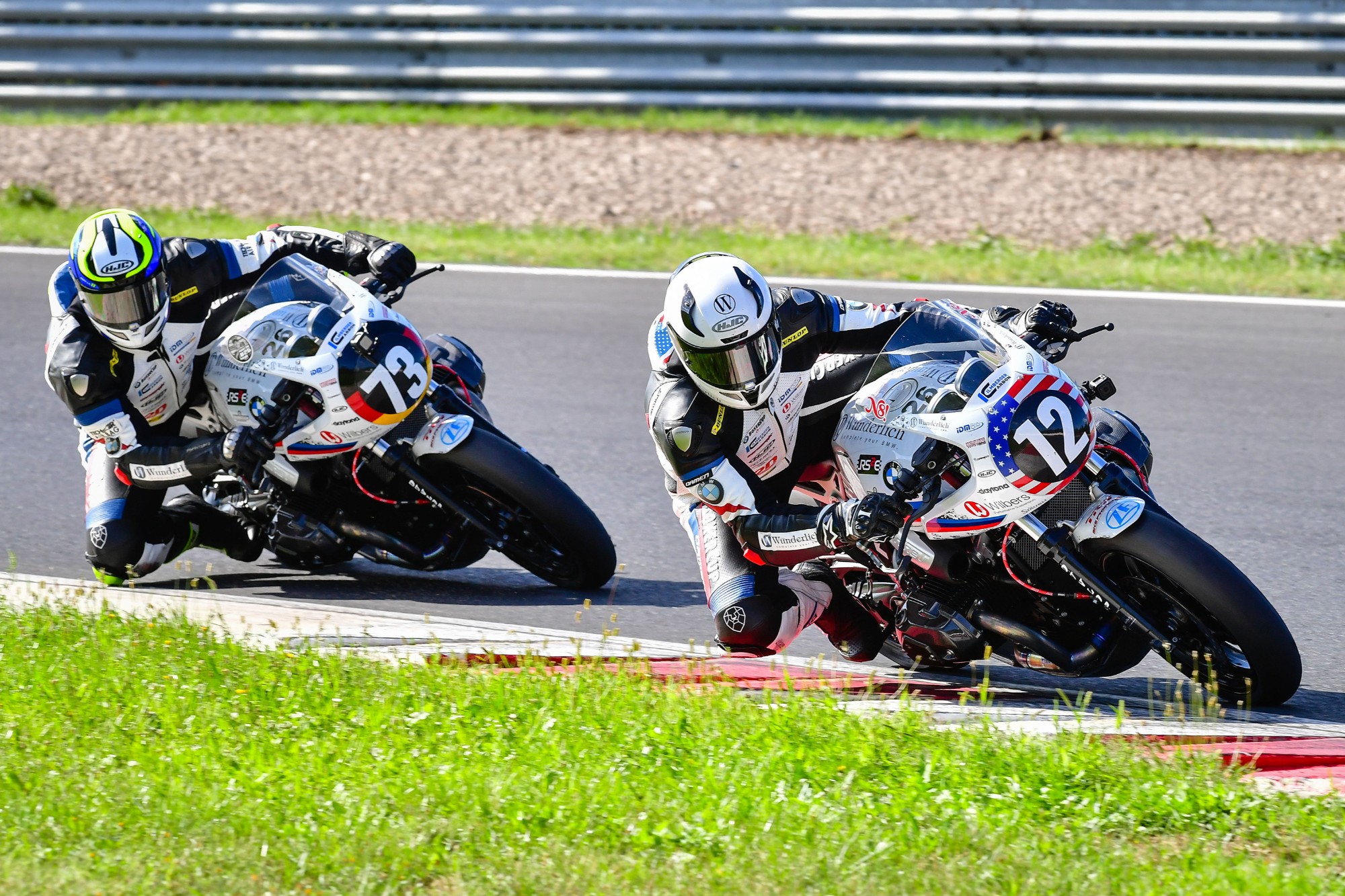 The fourth round of the 2019 BMW Motorrad BoxerCup promoted by Wilbers meant Championship races number six and seven for Wunderlich MOTORSPORT and its BMW R nineT racer’s Christof Höfer and Nate Kern. Both riders took a race victory each at the Automotodrom Most in the Czech Republic.

It was another new track to American rider Kern but that did not prevent him from taking provisional pole on Friday. With his best lap time of 1:47.627 minutes, Kern was around four tenth of a second quicker than his team mate and hardest opponent “Fifty” Höfer.

Another clash between the two had to sit out during the second Qualifying, as rain had fallen on the circuit and both riders opted – together with the whole team – to not take any useless risks and stay in the pits.

The first race on Saturday was held on a drying track with some damp and critical patches in the opening stages of the encounter. Championship leader Höfer played it safe and went out on rain tyres, whilst Kern took the opportunity and chance to fight on slicks. The US-boy made the better decision and took a dominant race win. Höfer brought his R nineT back to the pits in fifth spot.

The second encounter of the BoxerCup was another Wunderlich MOTORSPORT classical with Kern and Höfer fighting on the razors edge for the win. At the end it was a 0.030 seconds decision in favour to Höfer.

At Most, Kern was able to gain some ground on Höfer, who leads the Championship still with 156 points, but the US-American is coming close just 26 points behind. There are 100 points still to grab at both the final races at Assen and the Hockenheimring.

“Another cracking weekend. Friday was solid, even though I would have liked to be a bit closer to Nate, but he was so strong in the middle section of the track and I had no answer to this. But I knew where to do my homework. Unfortunately, Q2 was completely wet and we did sit this one out. The first race we faced mixed conditions and I did a wrong tyre choice. After almost crashing twice I played it safe and just wanted to bring the bike back home and not earning a DNF. Sunday was perfect, hot weather and both, Nate and myself, were roaring to go for the win. It was a hard, but fair fight. It then went out with 0,03 seconds for me being in front. This as well could have been the other way around. I want to say a big thank you, to everyone involved, to all our angels up in the sky, my mother and grandmother and all that support me from at home – and especially all staff of our team for a mega work. I am delighted!”

“Absolutely great weekend. I felt very good all those days, no Jet-lag and my batteries were pretty much at 100 percent. Right away, three laps into Free Practice 1, I already knew it was my kind of track, so I went on to pass Fifty instantly and concentrated on me and not trying to get bad habits in a couple of corners that he has burned into his memory. Yesterday the win and today we thought about it long and hard and I was ready. I think we swapped the position five or six times in twelve laps and I left it like this. I kept my breath, gave him a little bit of a gap and put my head down, did my homework. I knew I had to line up the second but last corner a little bit better to get the drive out – and I did. Until I had one hit in the rev-limiter. That was about 2 meters instantly and that was the difference at the line.”

“Saturday was a big gamble with the mixed conditions and Nate took profit of his experience and took a dominant win. But still, Fifty did everything right and took important points for the Championship. Sunday was another classical between those two and we should have accustomed to that sort of fight already, but this time it was even closer and could have been as well the other way round. Both of our riders are on the correct path speaking Championship wise and there has not even been a pre-decision yet. Neither of them can afford a mistake now – as also the competitors made some steps ahead and are coming closer.”