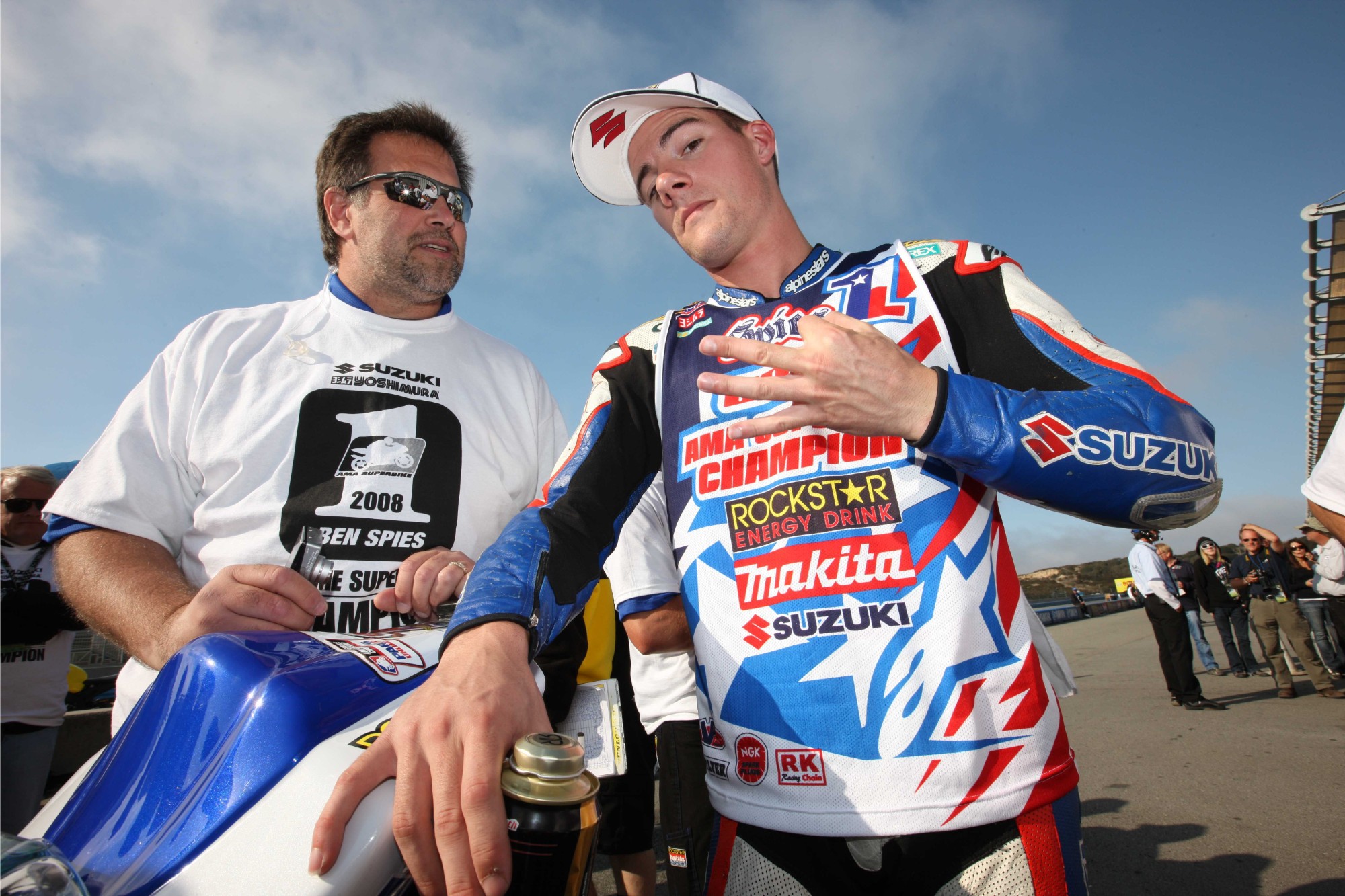 After winning three consecutive AMA Pro Superbike Championships with Yoshimura Suzuki (2006-2007-2008), Spies rode for Yamaha’s factory World Superbike team in 2009. Racing as a rookie on a different team, a different motorcycle, on different tires, and on unfamiliar racetracks, Spies took pole position at 11 of 14 rounds and won 14 of 28 races, earning the 2009 Superbike World Championship.

As per an option in his contract with Yamaha, Spies had the right to either stay in World Superbike or to move up into MotoGP for 2010; he elected to move into MotoGP and joined the Yamaha Tech 3 satellite team. Riding a Yamaha YZR-M1, Spies claimed two podium finishes and one pole position and earned Rookie of the Year honors during the 2010 MotoGP World Championship season.

In 2011, Valentino Rossi left Yamaha to go to Ducati, opening up a spot for Spies on the factory Yamaha MotoGP team. Spies qualified on the front row five times, finished on the podium four times, won the MotoGP race at Assen, and placed fifth in the 2011 MotoGP World Championship.

But in 2012, a series of issues, including technical problems and a season-ending injury to his right shoulder, limited Spies to five top-five finishes, 10th in the World Championship, and an end to his relationship with Yamaha.

In 2013, Spies signed a two-year deal to be a factory rider for Ducati and race for the Ignite Pramac Racing satellite squad, but Spies’ shoulder injury never fully healed. Spies raced in the first two rounds of the 2013 MotoGP season, before sitting out to do more rehabilitation work.

Spies returned to action at the Italian Grand Prix but withdrew mid-event due to continuing problems with his right shoulder injury. Spies then tried to come back at Indianapolis Motor Speedway, but he crashed during Free Practice Three and suffered a grade-five dislocation of his left shoulder.

Spies subsequently had surgery on both shoulders, and months later, Spies and Ducati jointly announced that he was retiring from professional racing due to the uncertainty over the condition of his shoulders heading into the 2013/2014 off-season.

In 2016, Roadracingworld.com asked Spies if there was a chance that he would ever return to professional racing, to which he said, “I don’t think so. If I even roll over in bed the wrong way my shoulder comes out of socket.”

Apparently Spies’ left shoulder has recovered full function since then, and his right shoulder, although not 100%, has improved substantially. Spies’ social media feeds are full of photos and videos of him engaging in water sports and riding dirt bikes, as well as racing a KTM 300 EC-W off-road in Texas State Championship Enduro Circuit (TSCEC) events. On October 4th, Spies posted a photo of his HJC road race helmet and Alpinestars gloves on Instagram with the message “Let’s see if I can still do this…”

Roadracingworld.com reached out to Spies directly to ask about his Instagram post and the huge amount of comeback speculation it spurred, and Spies responded with a text message that read, in part, “Gonna go spin some laps and see where we are at and go from there.”

Credible sources say that Spies or his representatives have had discussions with multiple motorcycle brands in the U.S., including Suzuki and Ducati, about supporting his comeback to racing. Potential budgets were discussed, with Spies having already raised about $1.5 million from a backer. A serious program will likely cost more than double that because as of now there is no team, no employees, no race shop/headquarters, bikes, spares, equipment, tools, truck, etc. And until the needed money is secured, the chances of any U.S. motorcycle distributor committing to the program remain slim.

Asked to comment via e-mail, Ducati North America CEO Jason Chinnock replied, “It’s our practice to not comment on speculation one way or the other.”

One potential partner in Spies’ project is Tom Houseworth, his Crew Chief during the vast majority of his professional career, including his MotoGP and World Superbike seasons and his AMA Pro Superbike Championship years. Asked about the project, Houseworth replied via text message, “Basically a few important things have to happen before anything concrete is set.”

Another potential partner is three-time AMA Pro Superbike Champion Doug Chandler, who told Roadracingworld.com that he would step down from his position as Race Director at MotoAmerica if he was asked to serve as Team Manager or a partner in creating a team for Spies.

MotoAmerica President Wayne Rainey has confirmed to Roadracingworld.com that he has had discussions in which Spies expressed his desire to get involved with the MotoAmerica series, if the right opportunity became available.