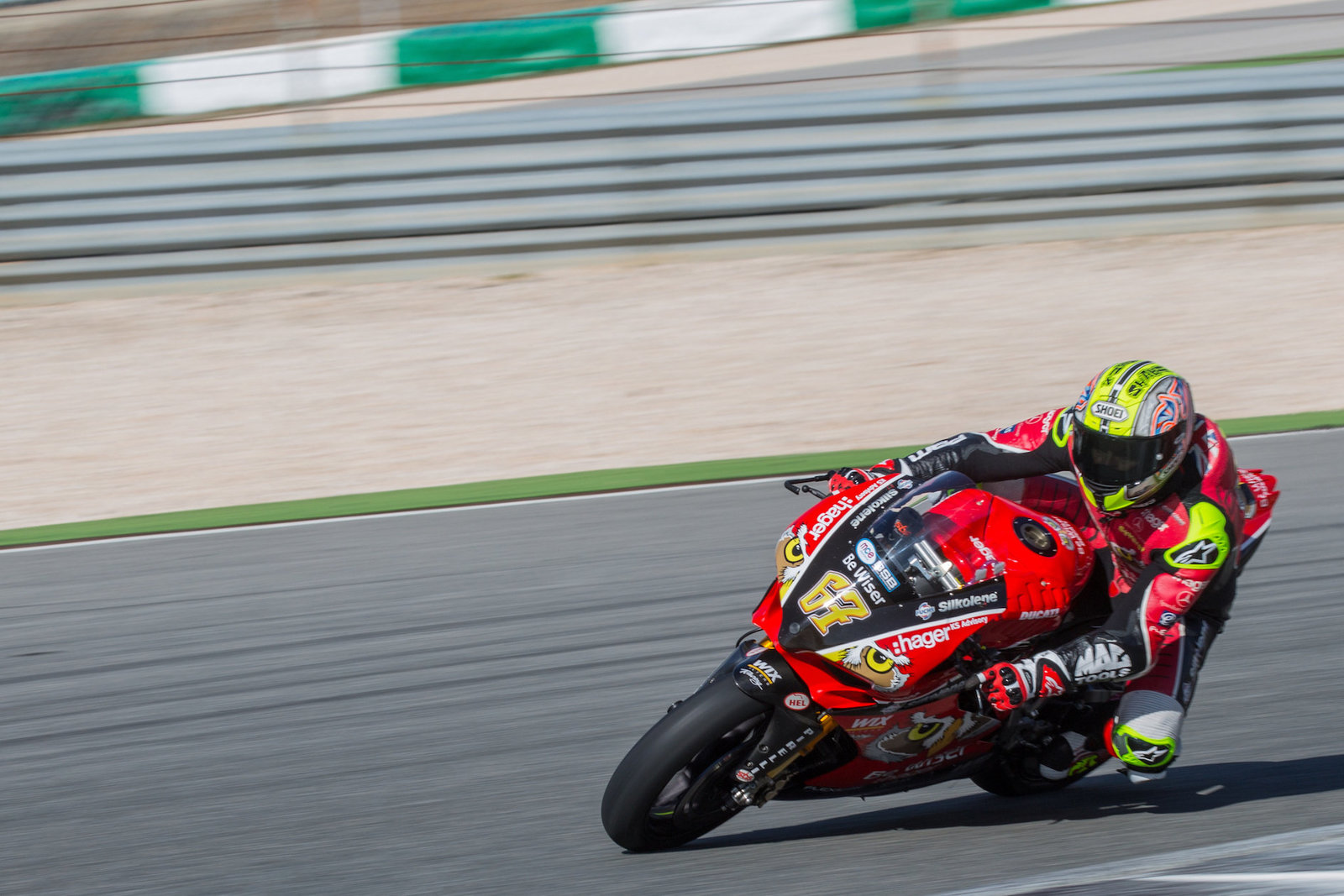 Following the promising start to the 2017 season with a positive test at Portimao last weekend, the Be Wiser Ducati British Superbike Championship Team of Shane Byrne and Glenn Irwin were hoping to continue their good work at Jerez this week but unfortunately the weather wasn’t at its best and rain curtailed today’s final day.

Londoner Byrne and Ulsterman Irwin did get a few laps in yesterday on the factory-supported Be Wiser Ducati Panigale Rs in the drier conditions but, despite Irwin doing a few laps today, the Penrith-based team’s hopes for a break in the weather didn’t materialise so they had to abort their plans once the wet conditions set in for the day at the Spanish track.

Despite their frustration, five-times MCE BSB title winner and defending champion ‘Shakey’ as well as Irwin, starting his second year with Paul Bird’s team, reported plenty of positives from the trip and further testing is planned before the opening round of the MCE British Superbike Championship which takes place at Donington Park on March 31/April 2.

For further information please visit http://www.britishsuperbike.com and keep an eye out for the new Be Wiser Ducati website at http://www.pbmuk.net which will be updated soon.

Shane Byrne: “I think it’s fair to say that we need to say a big thank you to the boss man, Paul Bird, for getting us back out riding in January again. We’ve been very fortunate to get to work through a few bits and pieces and more importantly, to blow out the winter cobwebs. We got two good days in Portugal and a good few hours at Jerez, having not been there for 12 years, so it was great fun to ride there. We started making some good progress with chassis settings on the first day in Jerez and looked forward to continuing that work today but unfortunately it rained all day bringing a premature end to our testing. We have some new parts on the horizon and can hopefully get back to Spain in March to be sure we’re fully prepared for what promises to be another great season.”

Glenn Irwin: “After yesterday, we realised we needed to find more grip for day two as the new tyre didn’t give us the gain we hoped for, but at least we solved some chassis issues throughout the day. My crew chief, Johnny, had done some spotting for me and I interpreted what we needed to do incorrectly, so after much thought last night, I returned to the track today, albeit on a wet circuit, and put to practice some new riding style adjustments. I honestly believe we have found something that will make us much more competitive in 2017 and we also worked well together throughout the four days. It’s a shame about the weather but that’s how it goes sometimes, so the plan is to put into practice what I have learned as a rider and what we have learned as a team regarding the bike. A big thanks to the team of Paul, Johnny, Phil, Warren, Macauley and John too.”

Phil Borley, Technical Director: “We were not so lucky with the weather for our second test of 2017 in Jerez, with a damp start to yesterday and a day of rain today. However, in the dry afternoon session yesterday, Shakey found a good setting and achieved some competitive lap times, as well as continuing to develop the new engine management electronics and test other parts. It was Glenn’s first visit to the Jerez circuit so he had to contend with learning the circuit as well as testing different settings and new components. The laps he completed on both days have not only given us some good data on new components, but also helped him try an alternative riding style with some positive benefits. Overall we can be very satisfied with our testing and we will use the knowledge gained from both tests to continue our development.”