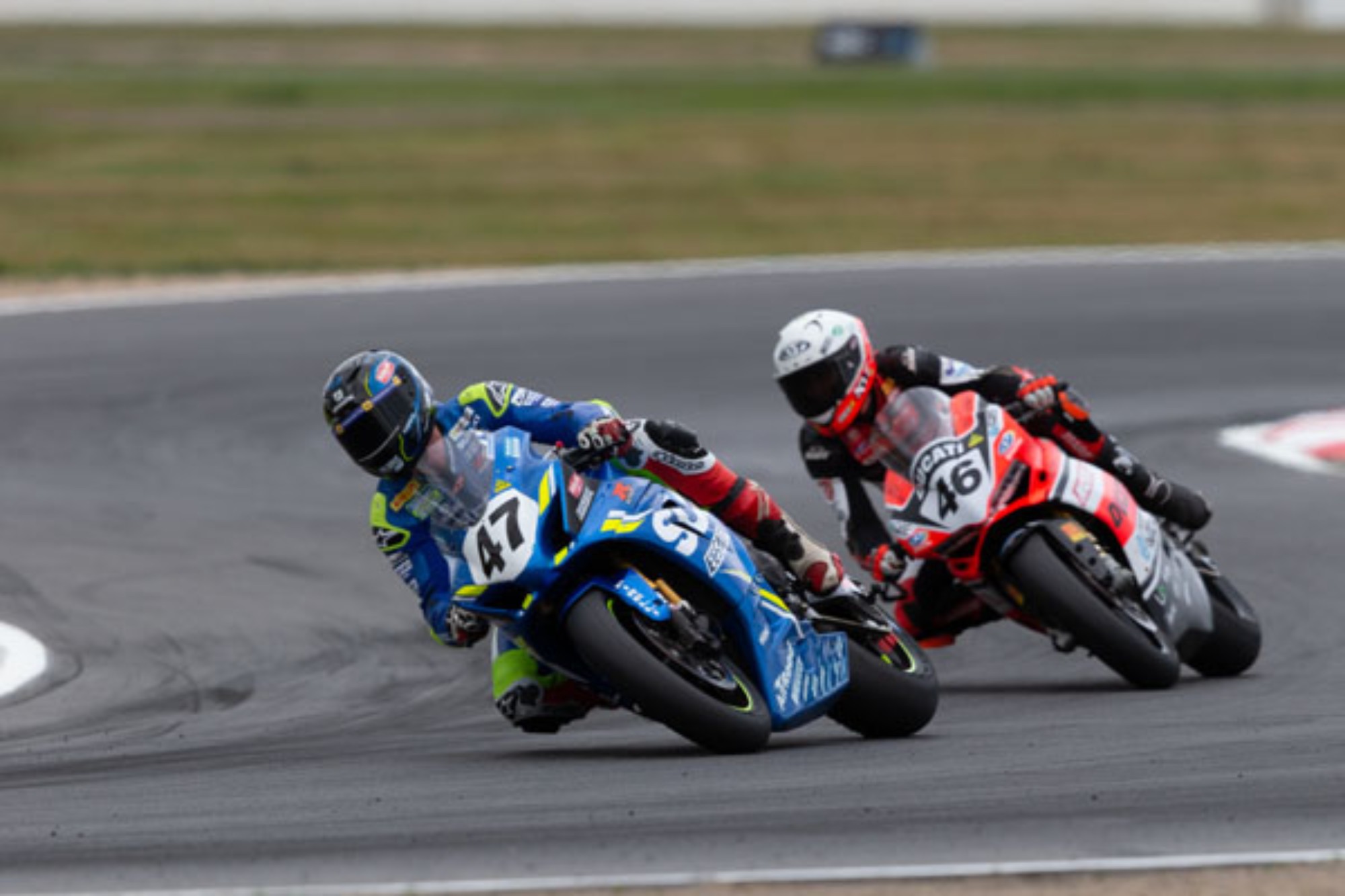 Back-to-Back Round Wins for Maxwell, as Jones Extends Championship Lead

Wayne Maxwell has taken his second-consecutive overall win in Round 5 of the Motul Pirelli Australian Superbike Championship at Winton Raceway, the Suzuki Ecstar rider prevailing after an intense battle with Ducati competitor Mike Jones that raged for both races.

Maxwell and Jones swapped the lead on several occasions in Race 1, Maxwell eventually coming out on top to take the race victory.

“It was a pretty tough-fought race, because the Suzuki worked fantastic through the back part of the track, but Mike just had a bit more power in the last sector,” Maxwell said.

“I made one mistake, lost my gap and was unsure if I would get it back, but the bike was unbelievable and the tyres stayed consistent.

“I got a really good start and did everything I could at the beginning,” Jones said.

“Wayne had a bit of extra pace, and at the end I couldn’t quite hang onto him. At the end, we suffered a bit in lap times with the tyres degrading.”

A determined Troy Herfoss (Honda) finished third after a fighting ride from 12th on the grid.

The start of Race 2 was marred by a couple of incidents, both of which caused red flags and saw the race distance shortened.

In the initial start, Mark Chiodo (Honda) lost control out of Turn 2 – he came off his bike and was collected by Kyle Buckley; both riders were forced into immediate retirement.

At the restart, Daniel Falzon and Lachlan Epis were also claimed by Turn 2, creating another red flag stoppage.

Once proceedings finally commenced, Maxwell and Jones resumed their Race 1 tussle, again swapping the lead on several occasions before the race was red-flagged on the fifth lap due to a sudden shower of rain dampening the circuit. The results were declared at the end of the lap prior, handing the win to Jones who had held a narrow lead at the time. However, due to the limited number of laps completed, only half points were awarded, enabling Maxwell to secure the overall round victory from Jones; another gritty performance for Herfoss saw the Honda rider again finishing in fourth position.

Maxwell believed the officials made the right decision in halting the race.

“It was very slippery, and very unpredictable – they called the race, which was the smartest decision,” Maxwell said.

“The bike was fantastic all weekend, and it was the nimble handling around the back of the circuit that got us across the line.”

Another pair of top-two race results, combined with a slight error from Cru Halliday which saw the Yamaha rider slip to ninth in Race 2, enabled Jones to extend his championship lead to 11.5 points with two rounds remaining.

“I believe we were hindered by the weather, but it was the safest choice for the race – I’m very happy with pole position and a lap record in qualifying,” Jones said.

“To come away with an extension in the championship lead is fantastic this weekend, even though we didn’t quite get there for the round win.”

The sixth and penultimate round of the Australian Superbike Championship will be held at Phillip Island Grand Prix Circuit, 4-6 October.

Kawasaki Superbikes – Points after Round 5