The top 12 were confronted with tricky conditions as the wind picked up and there were some slight sprinkles of rain, but not enough to wet the track but enough to challenge them, and it claimed Maxima Racing Oils BMW rider Glenn Allerton who crashed out.

Herfoss didn’t have it all his own way with 2020 ASBK Champion, Boost Mobile’s Wayne Maxwell also clocking fast laps early in the session.

But it was Herfoss who was on fire, and the two-time ASBK Champion could not be happier.

“I was very important to take first blood after a dominant Friday practice and a bit stressful with crash yesterday afternoon, but I’m happy to set a new benchmark with the fastest official lap of the circuit and to take the Elite Roads Pole Position to go with it,” Herfoss said.

“It’s important for me personally to really step up on this bike, I’ve been wanting this bike to arrive for a long time.

“I’m just so happy to come out here and showcase the new fireblade, Michelin rubber with penrite support. We’ve got such a good package at the moment and I’m excited to get out here and race with it.” 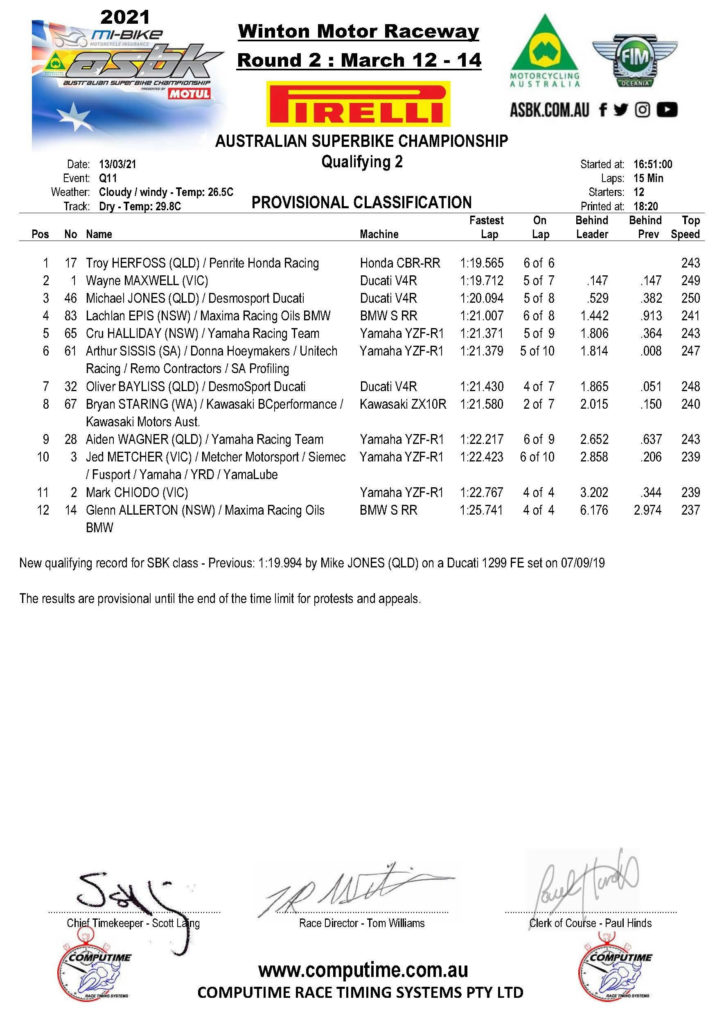 Tickets are very limited for this weekend’s Round 2, mi-bike Motorcycle Insurance Australian Superbike Championship, presented by Motul, at Winton Motor Raceway, Benalla, and only available online via www.asbk.com.au

Keep up to date with the latest news on the mi-bike Motorcycle Insurance Australian Superbike Championship, presented by Motul via www.asbk.com.au and following ASBK on Facebook and Instagram. You can also join our ASBK mailing list at www.asbk.com.au

ASBK Fans To Return Trackside At Winton   After more than a year, thanks to COVID-19, ra...
Read more

ASBK To Fire Up On The Apple Isle In 2021 Thanks to the vision and efforts of the Tasmanian Go...
Read more