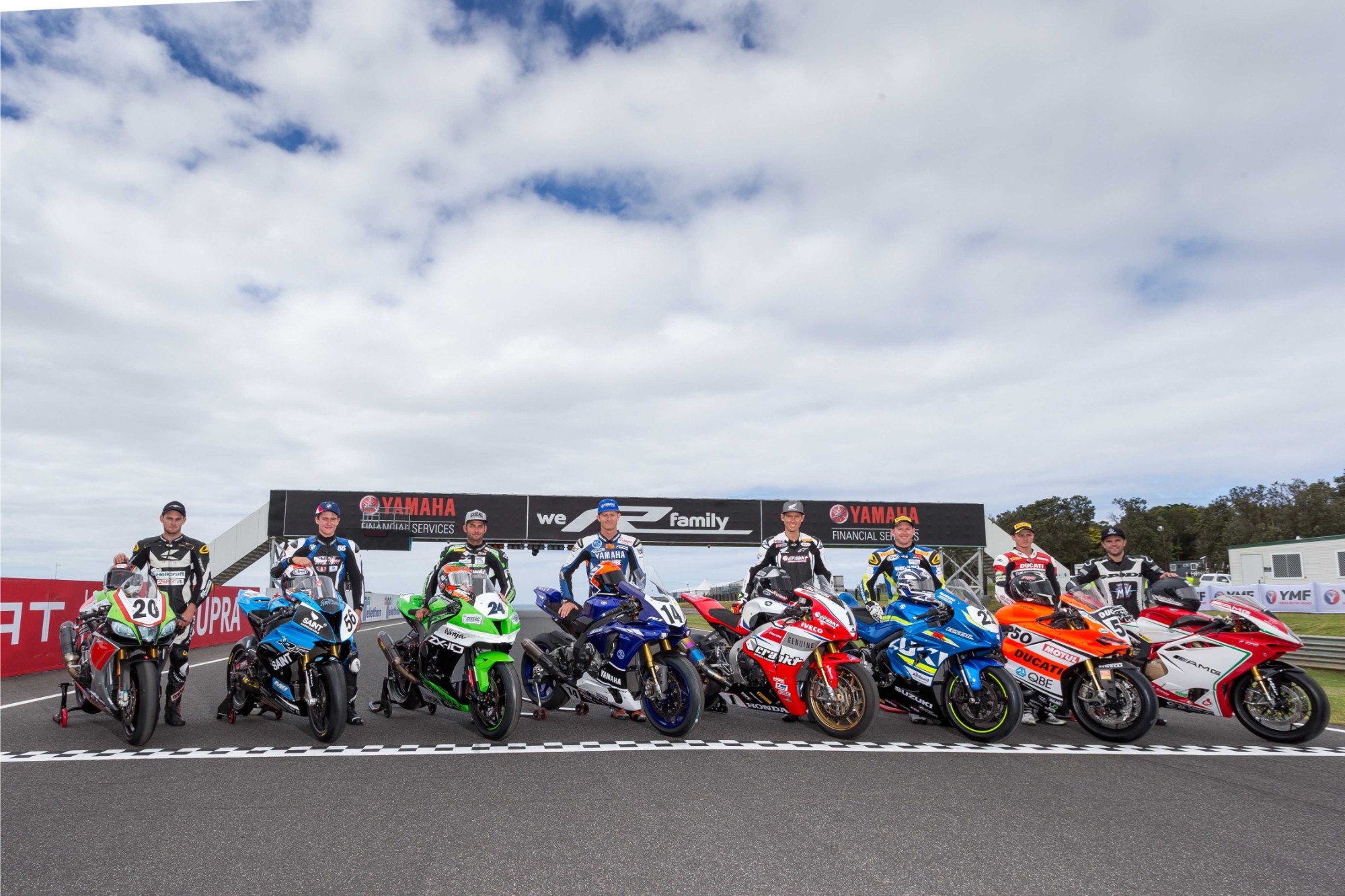 The Yamaha Motor Finance Australian Superbike Championship presented by Motul Pirelli (ASBK) is on its way to Phillip Island Grand Prix Circuit for the 2017 season finale. With five class championships being decided this weekend, now marks a great time to catch up with Superbike legends Steve Martin and Troy Bayliss to discuss the motorcycle mecca that will host the Spokes.com.au presents Round 7 Phillip Island Grand Prix Circuit (6-8 October).

“This weekend could be a lottery as to who takes the victory and it’s going to be amazingly close between the top competitors,” declared Martin.

“Potential winners for this weekend’s races could include riders like Glenn Allerton (Yamaha Racing Team, YZF-R1) who had a exellent record last year, or perhaps Daniel Falzon (JD Racing Team, YZF-R1) who won three races there back at Round 1,” Martin continued, “Those are two riders may not have a chance to claim the title, but they can certainly win races.

“Josh Waters (Team Suzuki ECSTAR, GSXR-1000R) is on a roll at the moment, but suffered a hole in his radiator back when we last visited Phillip Island, which devastatingly took him out of Round 1 contention. The Suzuki is arguably the in-form package at the moment and with only six points separating Waters from the title lead, he is a huge chance to walk away as 2017 YMI Superbike Champion.

“Troy Herfoss (Crankt Protein Honda Racing Team, Honda CBR1000SP2) who currently leads the championship, knows what he has to do and that’s go all out for wins. This will also of course be the last race for the Crankt Protein Honda Racing Team, so they will be aiming to go out on a high. We’ve seen huge point swings in the last few rounds, meaning Herfoss can’t rest on his laurels.

“Of course, you can’t count out Mr. Phillip Island himself, Wayne Maxwell (Yamaha Racing Team, YZF-R1), who has just about won as many races there as the rest of the field put together. It will be incredibly hard to pick a winner and It’s going to be an epic race meeting that’s for sure.

“I’ve had plenty of success and race victories at Phillip Island in the past and it’s a circuit that holds many fond memories. Perhaps my favorite race would be from 2004 when I almost won a World Superbike race there. I unfortunately blew up an engine on the final lap and just missed out on the win. However, the crowd treated it like a victory! The fan participation certainly makes it special.

“I’ve ridden on most of the well-known tracks across the globe and I still rate Phillip Island amongst the all-time greats. Due to its fast and flowing nature, you don’t have to be on the most powerful bike to within a shot for victory. The rider can make the difference there with the slipstream effect.

“I’m really excited to see Ted Collins (NextGenMotorsports, BMW S1000RR) jump into the YMI Superbike Class. You can’t expect much results wise for his first outing on the liter bike but he’s definitely a talent to watch out for in the future. I’m also interested to see how Corey Turner (Desmosport Ducati, 1299 Panigale) will fare this weekend. Ducati as a manufacturer have had enormous success at that track in the past and I wouldn’t be surprised to see him up towards the front.

“The 2017 ASBK season has been nothing short of special and its really come on strong. The championship certainly has all the right personnel behind it making all the right moves and decisions. ASBK itself is probably as strong as it’s ever been now. Racing in every class has been extremely intense and its generating plenty of interest.

“Phillip Island is a track where you never know what to expect. You often see riders that don’t have the chance to compete towards the front at other circuits, fight for victories there. It’s a true riders circuit.

“It can take several years for a rider to build up the required experience to be competitive there as there’s nothing else like it. Once you’ve raced there for several years, most riders would rate it as one of their favorite tracks on the calendar.

“The entire layout of the circuit is phenomenal, with its fast and flowing nature. I love coming down Gardner Straight and having a having that view of the ocean, not that you have a lot of time to admire it!

“I’ve had plenty of battles there with Colin Edwards and James Toseland that I remember fondly. Even back in 1997 when I had a race on a 250 GP bike, I had a scrap with up to six riders and it was neck and neck for the victory.

“I just want to see a great weekend of racing and I’m looking forward to seeing which new champions are crowned on Sunday. I would recommend anyone that’s thinking about attending to check it out, you won’t regret it!” Bayliss finished.

ASBK is live on SBS and Live Streaming

Fans will be treated to plenty of action on and off the track next weekend, however for the fans who can’t be at Phillip Island, the ASBK has provided them with the best opportunity to stay up to speed with everything happening on October 8.

From 9:30 am AEST the ASBK will be broadcast LIVE to everyone in the world via the ASBK website. Capturing the live racing moments, exclusive interviews with past and present champions and so much more, the Live Stream is not to be missed.

Start planning your journey to ‘the Island’ for the Spokes.com.au presents Round 7 at Phillip Island Grand Prix Circuit, VIC on 6th- 8th October 2017.

As always, stay up to date with all the latest news and updates from the ASBK by liking ASBK on Facebook, following the @asbk on Instagram and checking out the ASBK website here.