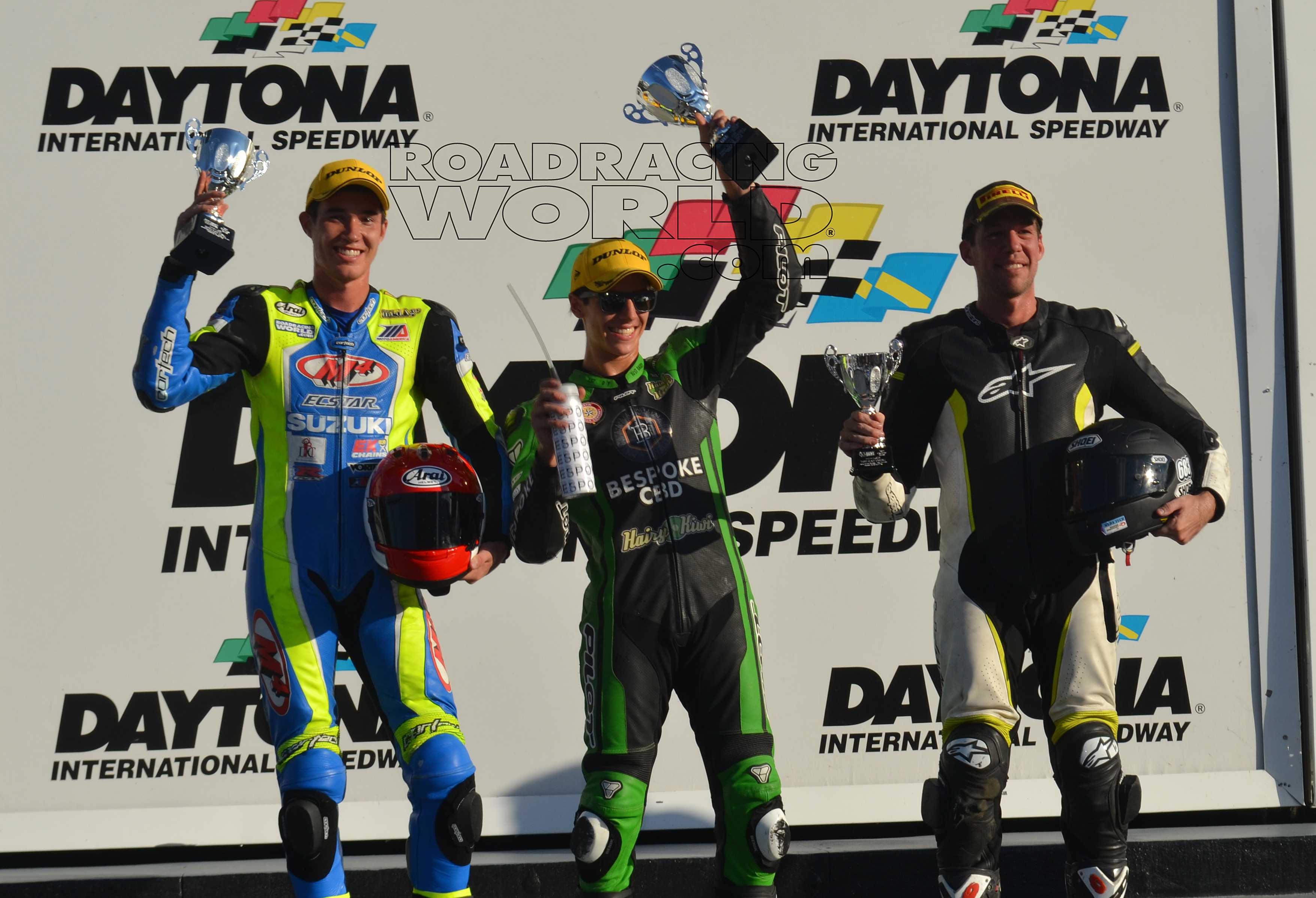 Kelly, a former Red Bull MotoGP Rookies Cup competitor, took the lead near the midway point of the 55-lap race, turned his fastest lap (a 1:51.381) on lap 41 shortly after he pitted for the second and final time, and pulled away to win by the margin of one lap over his closest competitor.

“I’m super grateful for the opportunity to come here,” Kelly said from the podium. “First of all, I just want to give a huge thank you to Team Hammer, Bespoke, Hairy Kiwi, all the guys there, EJ [Viso] and Robertino [Pietri] who gave me this opportunity at first.

“It’s really amazing. From the first moment, it felt like a family. It’s really good how they worked. Everyone’s super professional. I had a frickin’ machine today that was working spectacular. I’m super happy and super grateful. I’m just going to keep working from here. It’s my first time so I know there will be many more. I’m super happy for how this day went.”

Kelly said his future racing plans have not yet been set, but he has opportunities to continue racing in America and in Europe.

Unlike Kelly, who rode a GSX-R600 built (and supported) by Team Hammer specifically for doing endurance racing with quick wheel/tire changes, M4 ECSTAR Suzuki’s Lewis rode a MotoAmerica Supersport-spec sprint racebike that was only fitted with a quick-fill fuel tank at the last minute. As a result, Lewis was forced to ride with the same Dunlop front tire for all 55 laps (as opposed to the three front tires used by Kelly), to endure two long pit stops to fit new rear Dunlops, and finished second to Kelly.

Placing third overall and winning the GTO category was Virginia Express’ Ryan Jones, who rode a BMW S1000RR solo. Jones had to make one unscheduled pit stop during the race when the air bags in his Alpinestars leathers deployed even though he didn’t crash. The air bags opened the zipper on Jones’ leathers, forcing him to pit to zip the leathers closed again.

LB Sports’ Lloyd Bayley suffered damage to his Kawasaki ZX-10R’s rear sprocket that resulted in an early pit stop and had a front tire spin on the rim and cause a confidence-sapping vibration, but he rode on to get fourth place overall and second in the GTO class, which was enough for LB Sports to capture the overall and GTO Championships for the 2018 season.

The GT Lights class Championship was also wrapped up before the season finale by Team Coming In Hot’s Ray Hofman and Terry Wilkinson, who won the final GT Lights race on their Suzuki SV650.

A total of 30 teams entered the ASRA Team Challenge at Daytona.