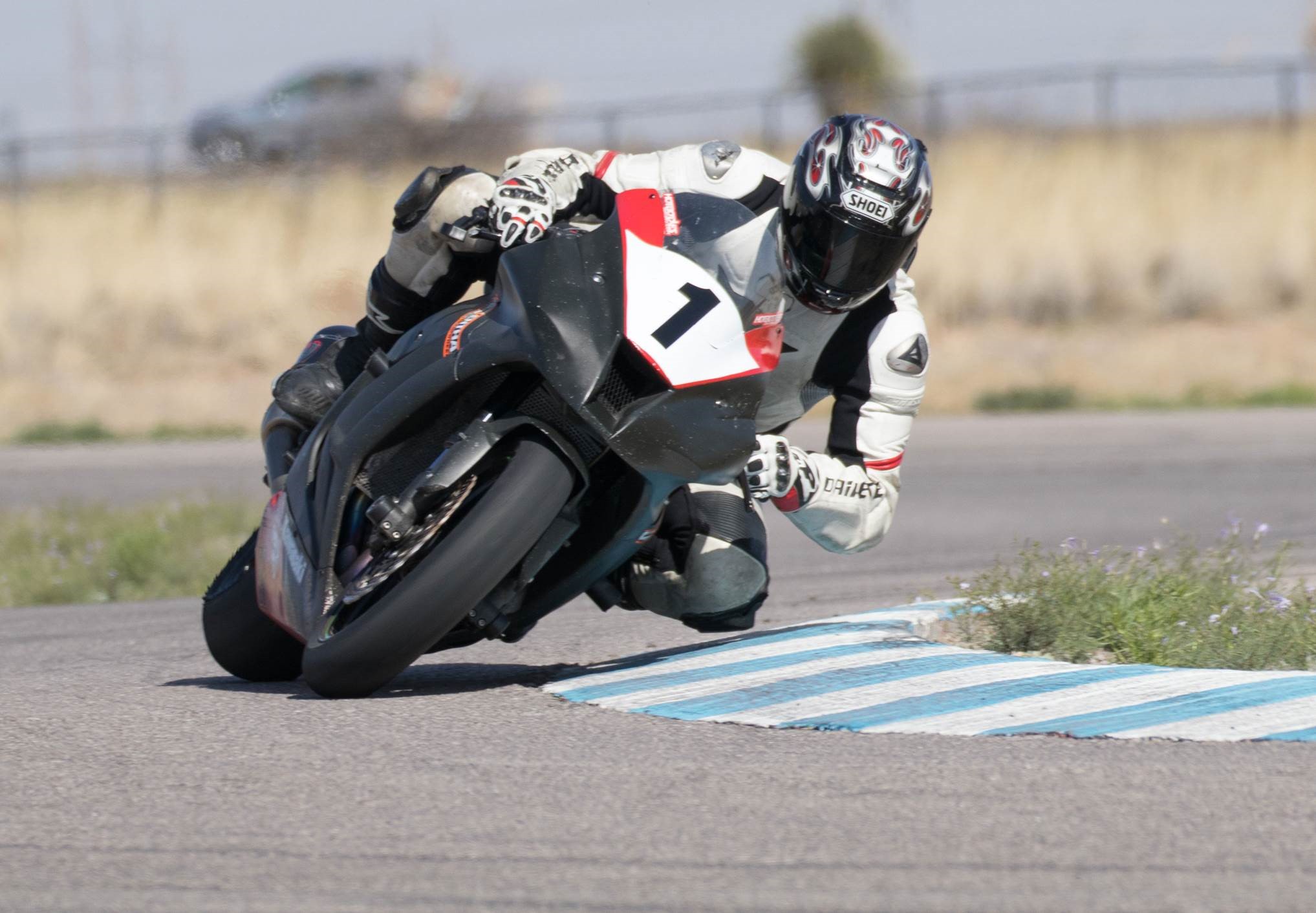 Experts Jason Brown and David Hurtado both claimed victories last Sunday, April 9 at Arroyo Seco Raceway near Deming, New Mexico. The second round of racing got off to a rough start as two separate incidents resulted in red flags during the early laps of the day’s first race, the Unlimited Superbike sponsored by Kurveygirl.com.

After re-gridding for the third time, it was series leader Mikey Shreve and his Yamaha YZF-R1 who first entered the first corner, followed by Joseph Chasser and his R1, and last year’s hole-shot-hero Brown on board a Kawasaki ZX-10R. Had it not been for gremlins in Chasser’s new and untested clutch that caused his front tire to hop on the pavement, he might have just edged Shreve to the front, as he was first to react when the green flag was raised.

Hurtado and his ZX-10R had a typical slow start, and it wasn’t until the fourth lap that he was able to pester Brown for second place; Hurtado attempted to overtake Brown inside the Horseshoe and on the back straight, but Brown had more power in his Kawasaki machine and fended him off.

With late braking entering the carousel, it was Brown who did the passing when he overtook Shreve for the lead and race win during the last lap. The lap prior, the two were side by side in a late-braking showdown into the Horseshoe, but Shreve had the inside line and remained in front. Hurtado, having suffered issues with his brakes during the last lap, dropped from third to fifth by the time he rolled past the finish line. Chasser took advantage of Hurtado’s mishap and claimed the last step on the podium.

The top three maintained their positions until the fourth lap when Brown passed Sotomayor on the back straight. Meanwhile, Hurtado worked his way through the pack after another disastrous start and clung to Chasser’s tail. But Chasser strove for mach speed lap times, one of which was a personal best 1:09.263 for the counter-clockwise direction, and he kept Hurtado behind until the next lap when he was overtaken inside the Horseshoe. That very same lap, series leader Shreve suffered chatter going into the Carousel and was forced off the track, but he refused to throw in the towel and rejoined at the tail of the pack in an attempt to salvage as many points as possible.

In the seventh lap, Hurtado caught second-place Sotomayor and the two dashed side by side into the Horseshoe. Sotomayor lost that drag race and went off into the dirt, but his race did not end there and he rejoined to finish fifth just in front of Shreve. Brown had a comfortable lead in front of Hurtado until the eighth lap when shifting issues sent Brown off just before the Bus Stop. He was able to recover quickly, though Hurtado took advantage of the opportunity for an easy overtake and sailed on to meet the checkers first. Brown finished second and Chasser, only his second race as an expert, rounded out the podium for the second time of the day.

The best race of the day was the UltraLight Grand Prix by JR Cochran Service, as teenagers CJ Chaparo and Robert Roach, Jr. brought had everyone in attendance watching as they battled for the third time of the day on the Heems Racing Kawasaki Ninja 250’s. The lead changed almost every lap, with Chaparo, a motocross racer who just made the switch to pavement, strongest on the brakes off the long straights and Roach smoother and faster in the middle of the turns. Both riders were over a second and a half under the previous 250 lap record at 1:19.1 as they traded paint several times, much to the enjoyment of spectators, with the win going to Chaparo and Roach right behind and Justin Brown in third. Roach and Chaparo each got two wins in the largest classes of the weekend setting the stage for a season long battle.

The third round of ASMA racing at Arroyo Seco is scheduled for Sunday, May 7. Testing will take place the Saturday prior.

Race Results for Round Two at Arroyo Seco Raceway

Southwest Thunder by Fast by Few