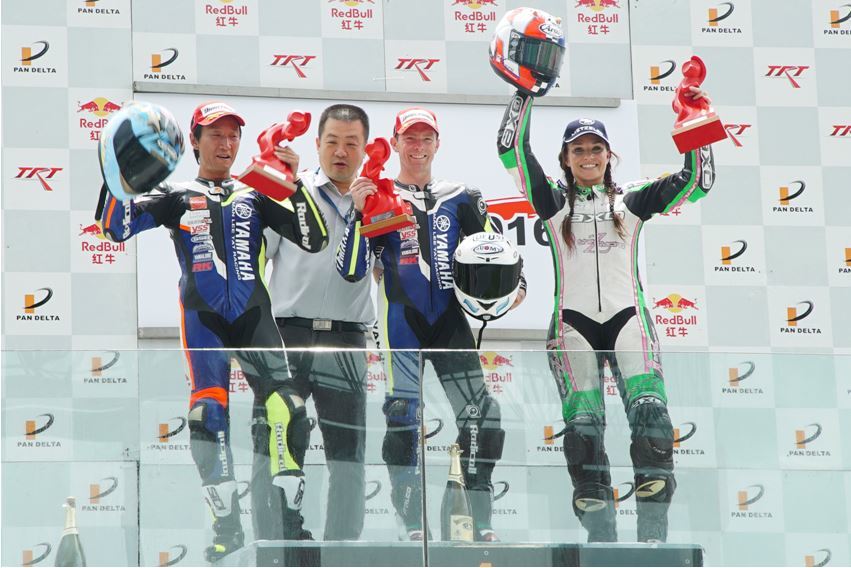 EAST TROY, WI – It was with dismay we heard during the Isle of Man weekend that after Splitlath won the last eight rounds of the series with their EBR 1190, Yamaha had hired away Splitlath Racing’s rider Mark Aitchison for the Chinese Pan Delta Superbike series.

With team members all supporting Mark Miller at the IOM and only two weeks before the next China Superbike weekend, what could possibly be the solution?

Splitlath Racing team owner John Dimbylow called EBR Motorcycles and said, “You know we are all about privateers, and our mechanic Tony Pogue knows Shelina Moreda well, and she is interested in riding. She just loves racing and is willing to take on this crazy adventure at the last minute.” He then told us that not only had Shelina not raced in China, but she also had never been on a liter type Superbike.

John said, “You know, the opposing team is laughing at putting us in this position, where they figure we have no way out. It is likely Mark will win, so let’s give the fans something positive to talk about instead. It’ll be a great story.”

We all agreed. “I completely identify with privateer riders, and especially ones brave enough to do something like this. Tell Shelina to enjoy the 1190 and that it is easy and forgiving to ride,” said Erik Buell. “I want her to have a fun weekend, and to have a great experience learning the bike and track.”

Shelina indeed quickly learned the track, and after practice came in saying, ‘I absolutely love this motorcycle, and the team.’ She qualified 12th, and when the green flag dropped for the first race on Saturday, she was able to get a strong start that put her in 8th in turn 1. Shelina kept getting quicker, passing more riders experienced on the track, and avoiding a crash and at the checkered flag, the stunned crowd saw an American woman rider cross the finish line in 3rd place. Mark Aitchison had won, but his lap times were nearly two seconds per lap slower than his times on the EBR in prior races. Shelina and Splitlath had triumphed against incredible odds.

When Shelina stepped on the podium, the crowd of over 70,000 went absolutely wild. Everyone loves to see an individual step up to an incredible challenge and succeed, and this may be the sports story of the year in that regard.

On Sunday, Shelina was mobbed in the pits, and as the race grew near had to shut herself in the changing room for a few moments of peace. The walk to the grid was a sea of cameras and fans, but as the race started Shelina’s focus was clear. Once again she had an explosive start driving from the 12th starting spot all the way to 5th place in turn one. The race was real battle of rubbing and sliding in the intense heat, and at the end Shelina was 4th, just one spot off the podium, proving that Saturday was no fluke. Her lap times had continued to improve, and she was closer to the winner than in the first race. And at the end of the race, she was mobbed by fans who absolutely felt they had seen the greatest racing ever, and that is what racing is at the core… individuals stepping up to the ultimate challenge.

We are proud to have built the bike that the team and Shelina used to this success, but let there be no mistake, we build EBR motorcycles for the rider, with the goal of delivering bikes that allow our riders to get the most from their talents. This weekend, it was about Shelina, who proved both her incredibly adventuresome and brave spirit, but also her talent.