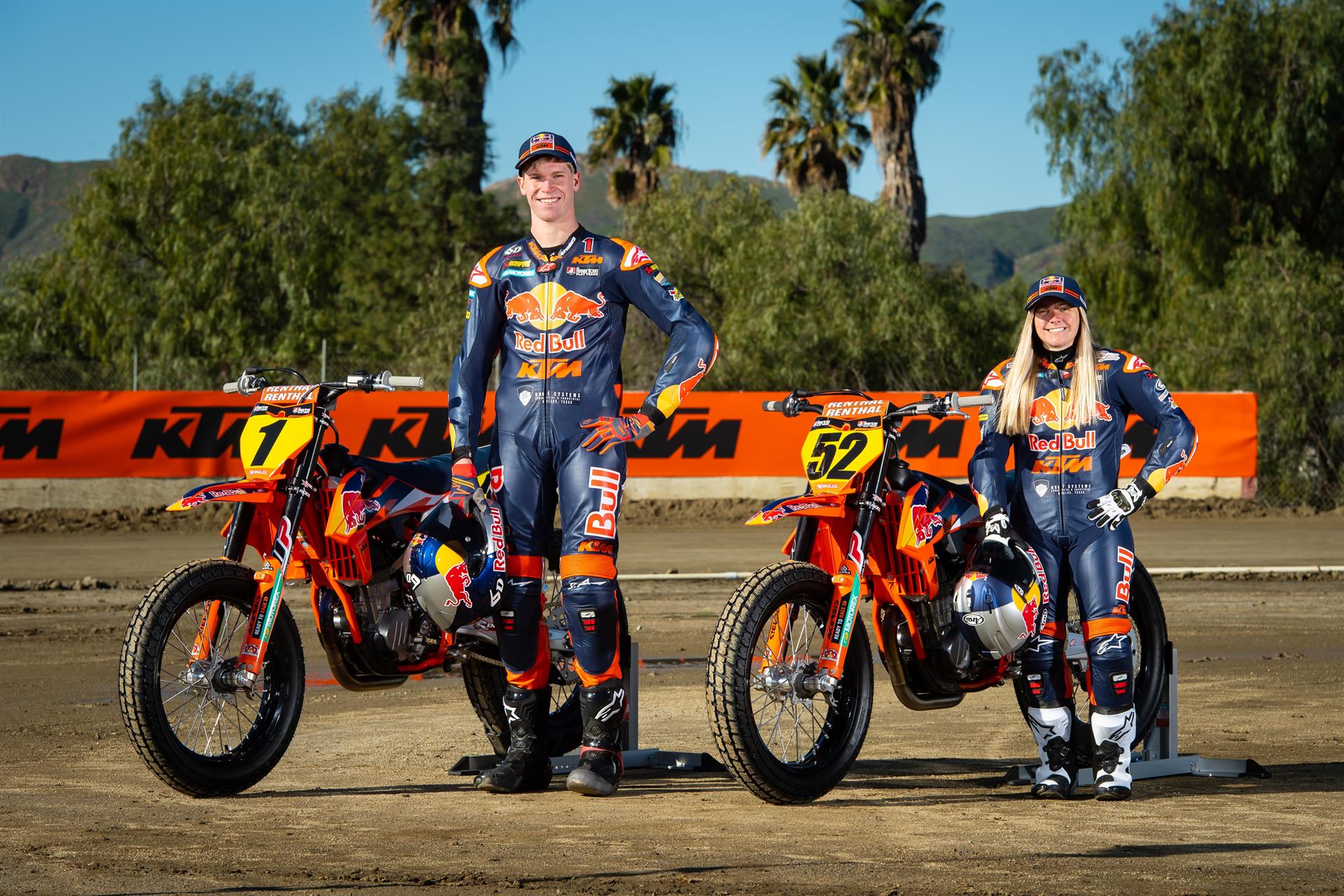 MURRIETA, Ca. (February 19, 2019) – KTM Motorsports is pleased to announce its Red Bull KTM Factory Racing Team lineup for the 2019 American Flat Track Championship as the brand dives into full-factory support in the premier championship series in 2019. Riding aboard the championship-proven KTM 450 SX-F FACTORY EDITION, teammates Dan Bromley and Shayna Texter are set to contest the AFT Singles Championship in 2019.

Bromley, the 2018 AFT Singles Champion, heads into the upcoming season with the coveted number one plate as he looks to defend his first title in the Singles class. The Pennsylvania native is no stranger to the number one plate, though, as he holds many AMA National Championships in flat track racing. Bromley witnessed his best season ever in 2018, where he notched four wins and 13 podium finishes en route to his championship and he looks to build upon those race-wins for 2019.

Dan Bromley: “I am extremely excited to be joining the Red Bull KTM Factory Team. With having a support effort last year, I look forward to having the full-factory backing in 2019. Teaming up with Shayna, I feel that the team will be a force to be reckoned with and I look forward to continuing my momentum from the 2018 season.”

Texter, who also hails from Pennsylvania, finished third overall in AFT Singles in 2018 with three race-wins and eight podium appearances. Texter began her professional racing career in 2008 and since then she has earned 15-career AFT Singles wins, the most of any other rider in the class. In 2011, Texter became the first female to win an American Flat Track National Main Event and she continues to pave the way for women in racing.

Shayna Texter: “I’m really excited to have the opportunity with the Red Bull KTM Factory Racing Team! I learned so much this past season running my own program but it’s a dream to be joining a team with a winning culture that is always READY TO RACE.”

Team Manager, Chris Fillmore: “KTM is very excited to announce these two riders for the new Red Bull KTM Factory Racing Flat Track Team and I, personally, am looking forward to another step in my career and the learning experience of being Team Manager. Dan Bromley is the reigning champion in the AFT Singles class and Shayna Texter is the winningest rider in AFT Singles history, so we couldn’t have asked for a more ‘READY TO RACE’ lineup this season. Both riders have incredible potential and we can’t wait to get the season underway. Building a new team and program from the ground up is not short of challenges, so I would like to personally thank the KTM Motorsports team, Dan and Shayna, as well as our team partners Red Bull, Roofsystems, Motorex, WP, Akrapovic, Renthal, Dubya, Hinson, HBD MotoGrafx, MotoMaster, Acerbis, Twin Air, Alpinestars, Red Torpedo, KTM Powerparts, KTM Powerwear and Wings for Life.”