American Flat Track: More From The Texas Half Mile, And How The Road Racers Did On The Dirt

American Flat Track: More From The Texas Half Mile, And How The Road Racers Did On The Dirt 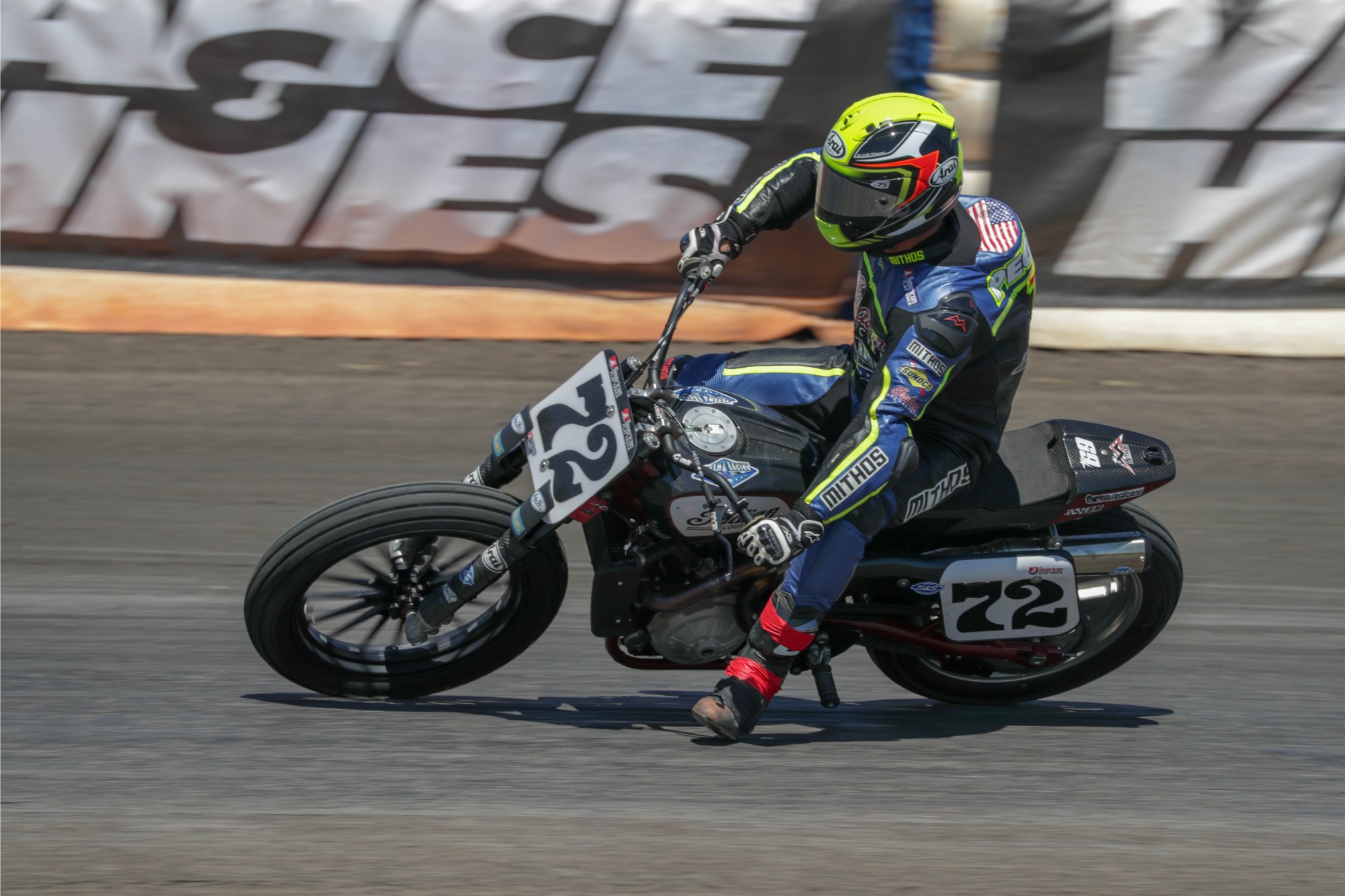 Saturday night’s American Flat Track event at Texas Motor Speedway saw a
number of high-profile road racers factor heavily in the results. Multi-time AMA
Superbike race winner Larry Pegram was quick all evening and ultimately
finished fifth in the AFT Twins Main Event. He was joined in the top-10 by JD
Beach, who scored his first AFT points of the season with a ninth-place ride
after already finishing on the podium in MotoAmerica Superbike. Former GP
racer Stevie Bonsey finished 14th, followed by former
WorldSBK pilot and current MotoAmerica Supersport contender PJ Jacobsen in
15th. Meanwhile, two-time AMA Supersport champion and former British Supersport
racer James Rispoli took seventh in the AFT Singles Main Event. And four-time
Daytona 200 winner Danny Eslick made good use of a provisional start in the AFT
Production Twins race, charging up from 17th to finish inside the top-10 in
ninth.

From the start, Mees found himself embroiled in
a one-on-one shootout with his fellow Indian Wrecking Crewman, Briar Bauman (No. 14 Indian
Motorcycle/Progressive Insurance FTR750), who also just happened to be the AFT
Twins presented by Vance & Hines championship leader and arguably the rider
best positioned to steal Mees’ crown this season.

While Mees racked up a remarkable 20 total
victories during his back-to-back title runs in ‘17 and ‘18, he came into the
Texas Half-Mile in the midst of a seven-race winless streak. But as hungry as
he was to finally end that drought, Bauman certainly made him work for it.

The two immediately broke free from the pack and
traded the lead back and forth multiple times with a series of slick overtakes
in which they squared one another up exiting Turn 4. Mees finally broke
Bauman’s challenge on lap 22 of 25. At that point, he eked out just enough of a
gap to breathe a bit easier over the race’s final circulations, claiming the
checkered flag with a 1.316-second margin of victory.

The win marks Mees’ 27th Half-Mile triumph,
breaking a tie for second all-time with the legendary Will Davis.

When asked if he expects Saturday’s win to
reopen the floodgates, a measured Mees said, “That would be the goal — that is the goal — and we’d love to do that,
but this year is tougher. The guys are better, and they’ve got their machines
figured out better. I’ve got to dig down deeper.

“Last year, I basically got a good start, went
by Briar when he was on the Kawasaki, and took off. This time, I had to wear
the boy out. He rode so good. He was better than me in Turns 3 and 4 early in
the race. I saw what he was doing and moved down to his line, and that allowed
me to maintain a little bit of a gap.”

Behind him, Sammy
Halbert (No. 69 Harley-Davidson Factory Flat Track Team XG750R Rev X)
guided the works H-D to fourth after he tracked down and dispatched a
rejuvenated Larry Pegram (No. 72
Indian Motorcycles/Pegram Racing Indian Scout FTR750), who scored a mightily
impressive fifth-place finish at the age of 45.

After getting her 2019 championship campaign off
to something of a quiet start, Shayna
Texter (No. 52 Red Bull KTM Factory Racing SX-F 450)
reminded the world exactly why she’s the rider with the most wins in the
history of the Roof
Systems AFT Singles presented by Russ Brown Motorcycle Attorneys class
with an ultra-aggressive ride to victory at the Texas Half-Mile.

Texter powered her way from sixth to first in
just five laps with multiple hard-charging overtakes. She then threatened to
check out but was unable to shake free from a motivated Mikey Rush (No. 15 RMR Honda/Red Riders Rewards Honda CRF450R).

But while Rush was actively searching for a way
back past Texter, he saw a front wheel repeatedly attempting to do the same to
him over the contest’s final few laps. That wheel belonged to 16-year-old
phenom James Ott (No. 193 Media Home
Inc./Kawasaki of Simi Valley Honda CRF450R), who was making his professional
debut.

Ott closed the opening lap of the Main Event
mired outside the top ten yet somehow managed to slice past several of the
nation’s most talented dirt track racers and put himself in position to make a
last-gasp bid for a maiden victory.

Ott made one final lunge to overtake Rush as
Rush did the same to Texter on the race’s final corner. In the end, their
positions remained unchanged at the checkered flag. Texter won by a scant 0.129
seconds over Rush with Ott another 0.125 seconds back in third.

Race winner Texter said, “It’s awesome to get
the first win behind us. To give Red Bull KTM its first win in American Flat
Track is awesome. Hats off to my partners… To be able to win in Roof Systems’
backyard is incredible.”

It was a family affair at the Texas Half-Mile as
Shayna Texter’s brother, Cory Texter (No.
65 G&G Racing/Holeshot Powersports Yamaha MT-07),was victorious in the opening race of the 11-race 2019 AFT
Production Twins championship.

Texter tracked down a quick-starting Dalton Gauthier (No. 122 Racing
Unlimited Kawasaki/D&D Cycles Kawasaki Ninja 650) early in the 15-lap Main
Event and proceeded to pull clear from there.

Texter ultimately won the race by 1.850 seconds.
After the race, the two-time AFT Twins podium finisher said, “This is awesome…
I just want to keep it going. A lot of guys wrote me off coming into this race.
They didn’t expect me to do much because I’ve had a tough year, and last year I
struggled a little bit. But I’m not washed up yet, and I’ve still got more in
the tank. We’re going to battle all year long and see what we can do.”

Don’t miss the feature broadcast of the Al Lamb’s Dallas Honda Texas Half-Mile
presented by Russ Brown Motorcycle Attorneys on NBCSN. As always, the broadcast will include flag-to-flag coverage
of the Main Events enhanced by exclusive features and cutting-edge aerial drone
and onboard footage. It will debut on Sunday, April 28, at 5:00 p.m. ET/2:00
p.m. PT and will re-air on Tuesday, April 30, at 4:00 p.m. ET/1:00 p.m. PT.

There’s
little time to rest as the 2019 American Flat Track season will pick back up at
Wild Horse Pass Motorsports Park in Chandler, Ariz., for the Law Tigers Arizona Super TT presented by
RideNow Powersports next Saturday, April 27. Live coverage will be
available at FansChoice.tv starting at 4:00 p.m. ET/1:00 p.m. PT. Tickets for
the Arizona Super TT are on sale now and can be purchased at https://tickets.americanflattrack.com/2019-wild-horse-super-tt.html.

NBCSN andFansChoice.tv are the official homes for coverage of American
Flat Track. For the 2019 season, NBCSN’s coverage of AFT maintains its
highly-coveted, weekend afternoon programming slots within two weeks of each
event. The complete schedule for AFT on NBCSN can be viewed athttp://www.americanflattrack.com/events-nbcsn/.
FansChoice.tv remains a cornerstone of AFT’s digital strategy, providing live
streaming coverage of every event onAFT’s live page while previous events and exclusive features
are available onAFT’s VOD
page.

American Flat Track is the world’s premier dirt track motorcycle
racing series and one of the longest-running championships in the history of
motorsports. Sanctioned by AMA Pro Racing in Daytona Beach, Fla., the series is
highly regarded as the most competitive form of dirt track motorcycle racing on
the globe. For more information on American Flat Track, please visit http://www.americanflattrack.com, like us on Facebook, follow us on Twitter, check us out on Instagram, live stream the events at FansChoice.tv and catch all the American Flat Track racing
action on NBCSN.