American Flat Track: More From The SoCal Half Mile, Including How Current Pro Road Racers Did

American Flat Track: More From The SoCal Half Mile, Including How Current Pro Road Racers Did 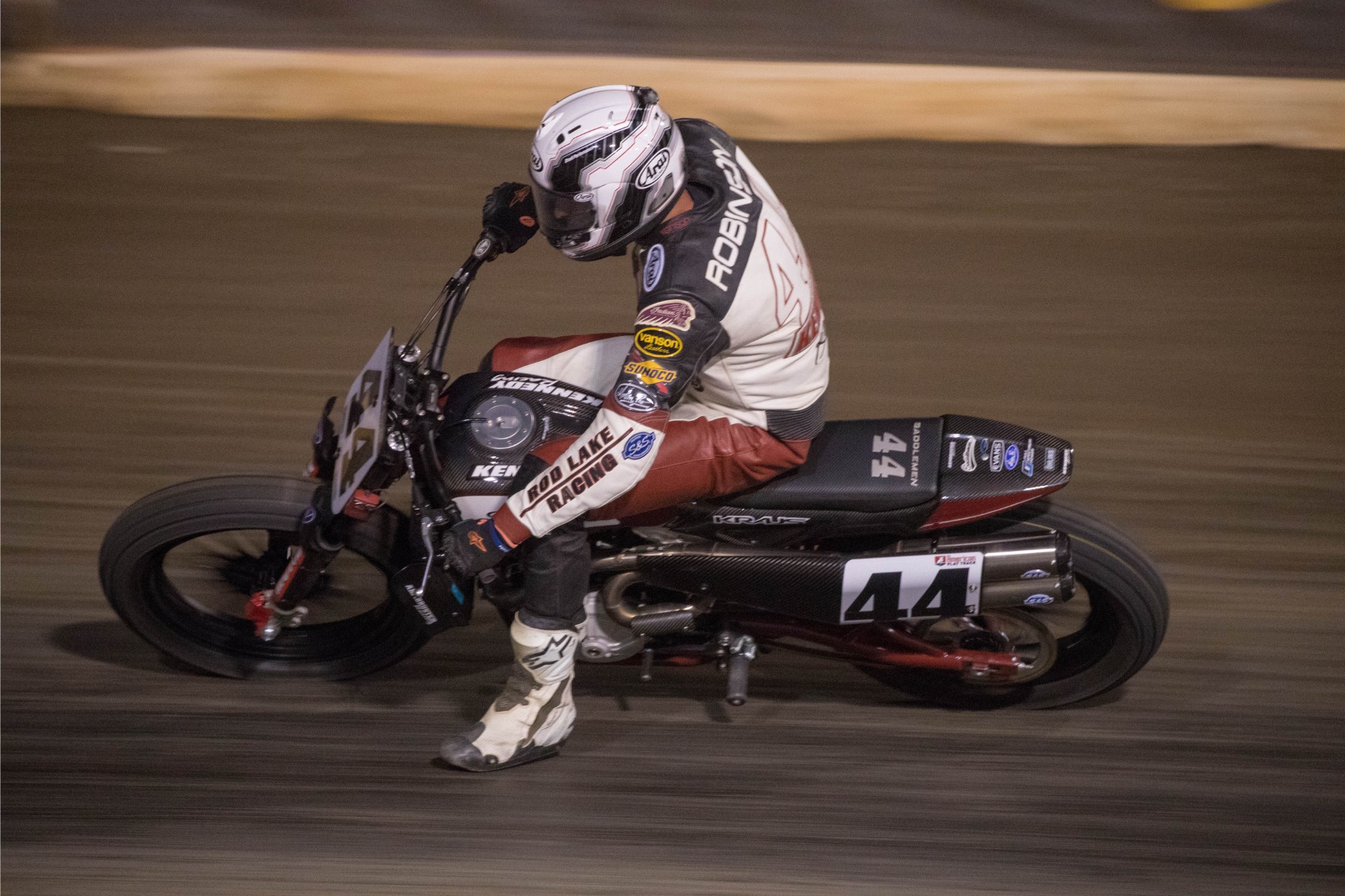 Note: Saturday’s
American Flat Track Main Events didn’t quite live up to the promise for the
field’s current pro road racers that their form had suggested might be possible heading into
the evening program. The unretired Larry Pegram again proved his
competitiveness with another AFT Twins Main Event top-10 (10th), while JD
Beach backed up his maiden AFT Twins and MotoAmerica Superbike wins with an
11th-place ride at the So-Cal Half-Mile. However, earlier in the day Pegram
actually won Semi 2 going away, and Beach was the fastest rider in qualifying.
It was a similar story for PJ Jacobsen, who finished 13th in the AFT Twins Main
after demonstrating top-10 speed in the lead-up to the race. Meanwhile, James
Rispoli performed double duty on the undercard, taking part in both the AFT
Singles and AFT Production Twins classes. He had a rough go in AFT Singles,
DNFing after using his only provisional start of the year just to get into the
Main. Rispoli fared better in the AFT Production Twins action, finishing in
eighth position. Andy DiBrino finished second in the Super Hooligans race, and Rob McLendon, who won a MotoAmerica Twins Cup race in 2018, finished 11th.

Robinson
controlled the once stopped and restarted Main Event from the front from the
race’s opening lap. In doing so, he became the first AFT Twins presented by Vance &
Hines rider to claim more than one victory in 2019.

When asked
if his second win of the year was as satisfying as his first, Robinson said,
“They all feel amazing. It’s great to be up here. Any time you’re on the box is
good, but winning… this is what it’s all about. This is what we put in all the
hard work for. My team busted their butts. My team owner, Jerry Kennedy, gives
us everything we need to win. My crew chief, Brent Armbruster — the guy is
amazing. We make a lot of decisions together, but there are some times he bails
me out and gets the bike right. Man, he hit the nail on the head again tonight.
This one is for my team.”

While
Robinson took the checkered flag with nearly two seconds to spare and
relatively little drama following the restart, prior to the red flag a titanic
showdown was taking shape.

At the
time of the stoppage, Robinson found himself relentlessly hounded by an
inspired Sammy
Halbert (No. 69 Harley-Davidson Factory Flat Track Team
XG750R Rev X), who teased the potential to overtake Robinson on either the
inside or the outside. But a potentially historic victory (the factory Harley
squad is looking for its first win since 2016 and the first ever for the
XG750R) would have to wait at least another week, as the fallout of the red
flag foiled Halbert’s hopes.

After
a Henry Wiles (No.
17 Bandit Industries/DPC Racing/Wilco Racing Indian FTR750) spill reset the
Main Event eight laps in, Robinson powered away at the restart while Halbert
dropped several spots down the order.

Title
leader Briar Bauman (No.
14 Indian Motorcycle/Progressive Insurance FTR750) was the primary beneficiary.
He immediately slotted into second and held strong throughout to extend his
perfect podium record on the season with a runner-up result.

Halbert
battled his way forward and ultimately made his way back onto the box with a
charge to third. His encouraging performance was amplified by that of his
teammate, Jarod
Vanderkooi (No. 20 Harley-Davidson Factory Flat Track Team
XG750R Rev X), as the two combined to give the resurgent works Harley outfit a
3-4 result at Vance & Hines’ home race.

Defending
double AFT Twins Champion Jared
Mees (No. 1 Indian Motorcycle/Progressive Insurance
FTR750) finished fifth. That might not sound overly impressive considering his
stack of accomplishments in recent seasons, however, it’s worth noting that
Mees summoned the speed, skill, and motivation to slash his way up from the
back of the grid after only narrowly qualifying for the
Main Event.

2016 Roof Systems AFT Singles presented by
Russ Brown Motorcycle Attorneys champion Ryan Wells (No.
94 Estenson Racing Yamaha YZ450F) backed up his first podium of the season —
taken last time out at the Arizona Super TT — with his first win of the year
in a virtual wire-to-wire triumph at the So-Cal Half-Mile.

On a track
that had proven difficult to overtake all night, the majority of the fireworks
in the AFT Singles Main came early. Two-time ‘19 race winner Jesse Janisch (No.
132 Roof Systems Dallas TX/Öhlins Yamaha YZ450F) grabbed the holeshot but was
immediately overhauled around the outside by Morgen Mischler (No.
69 Waters Autobody Racing/D&D PowerSports KTM 450 SX-F).

Wells
squared them both up, however, and stole away the lead before the opening lap
was out. The race was effectively decided at that point, as Wells never put a
wheel wrong or provided a rival an opportunity to stick a wheel by him.

After the
race, Wells said, “TTs have never been my super strong suit so I knew getting a
podium (at the Arizona Super TT), we had worked out the bugs that needed to be
worked out. The Yamaha was awesome. It was huge for me to come in here and get
the win. To lead all 15 laps… it was a long race for me mentally. It felt
awesome to lead some laps and come out with the win. I can’t say enough about
the whole Estenson racing family. That pit over there is literally a family.
The camaraderie is awesome and I couldn’t get a win for a better group.”

Michael
Inderbitzin (No. 54 Pacific Tub & Tile/Mark Strock Honda CRF450R)
emerged from the pack and slotted into second in the early going. Inderbitzin
kept Wells honest throughout and was hugely impressive on his way to a
first-career AFT Singles podium finish.

A number
of key title contenders clawed their way forward late in the race to collect
some additional points that could prove pivotal as the season continues to take
shape. Chief among them was championship leader Dalton Gauthier (No.
122 D&D Cycles/Gobert Smash Husqvarna FC450), who made his way up into
third by the checkered flag.

Cory
Texter (No. 65 G&G Racing/Holeshot Powersports Yamaha MT-07)
picked right up where he left off at the Texas Half-Mile, going two-for-two in
AFT Production Twins action in 2019 by scooping up a second consecutive victory
on Saturday night at the So-Cal Half-Mile.

Texter
jumped out into the lead from the start and never relinquished the lead in the
15-lap Main.

Ryan Varnes (No.
68 Varnes Racing/RoyBuilt/Don’s Kawasaki Ninja 650) planted himself on Texter’s
outside hip over the opening handful of laps and for a time appeared capable of
pushing Texter to the flag. However, matching Texter’s stone-cold consistency
on the slick Half-Mile proved too much of an ask.

As a
result, Texter cleared open some space at the front en route to a 0.959-second
margin of victory, while Varnes found himself reeled back into a three-way
battle for the runner-up spot with Kayl
Kolkman (No. 98 Kolkman Racing/Uncle D Yamaha MT-07)
and Michael
Inderbitzin (No. 54 Weirbach Racing/Racing Unlimited
Kawasaki Ninja 650).

Despite
the late pressure, Varnes managed to hold on for second, while Kolkman narrowly
fended off Inderbitzin’s challenge for the last spot on the podium in the
race’s final corner by a meager 0.072 seconds.

After
picking up his second AFT Production Twins win in as many tries this season,
Texter said, “I just have a good bike and a good team behind me. I’m having fun
and enjoying myself this year, and that’s what’s important. This class is no
joke; there are some great riders in it, and I knew this Main Event would be
tough. I’m not typically fast on these slick racetracks, so we’re two-for-two
on tracks I didn’t think we’d do well on. I’m pretty happy with that.”

Be sure to
check out the feature broadcast of the Vance & Hines So-Cal Half-Mile
presented by Russ Brown Motorcycle Attorneys on NBCSN with
coverage of all Main Events, enhanced by exclusive features and cutting-edge
aerial drone and onboard footage. The broadcast will debut on Sunday, May 19,
at 12:00 p.m.
ET/9:00 a.m. PT and will re-air later that week on
Thursday, May 23, at 4:00 p.m. ET/1:00 p.m. PT.

American
Flat Track continues its California swing with next weekend’s Law Tigers Sacramento Mile presented
by Cycle Gear powered by Estenson Racing at the Cal Expo Fair in
Sacramento, Calif., on Saturday,
May 18. Live coverage will be available at FansChoice.tv
starting at 5:00 p.m. ET/2:00 p.m. PT. Tickets for the Sacramento Mile are on
sale now and can be purchased at www.sactomile.com.

NBCSN andFansChoice.tv are the official homes for coverage of American
Flat Track. For the 2019 season, NBCSN’s coverage of AFT maintains its
highly-coveted, weekend afternoon programming slots within two weeks of each
event. The complete schedule for AFT on NBCSN can be viewed at http://www.americanflattrack.com/events-nbcsn/. FansChoice.tv
remains a cornerstone of AFT’s digital strategy, providing live streaming
coverage of every event on AFT’s live page while previous events and exclusive features
are available on AFT’s VOD
page.

American
Flat Track is the world’s premier dirt track motorcycle racing series and one of
the longest-running championships in the history of motorsports. Sanctioned by
AMA Pro Racing in Daytona Beach, Fla., the series is highly regarded as the
most competitive form of dirt track motorcycle racing on the globe. For more
information on American Flat Track, please visit http://www.americanflattrack.com, like
us on Facebook, follow us on Twitter, check us out on Instagram, live stream the events at FansChoice.tv and
catch all the American Flat Track racing action on NBCSN.