American Flat Track: More From The Races At The Red Mile

American Flat Track: More From The Races At The Red Mile 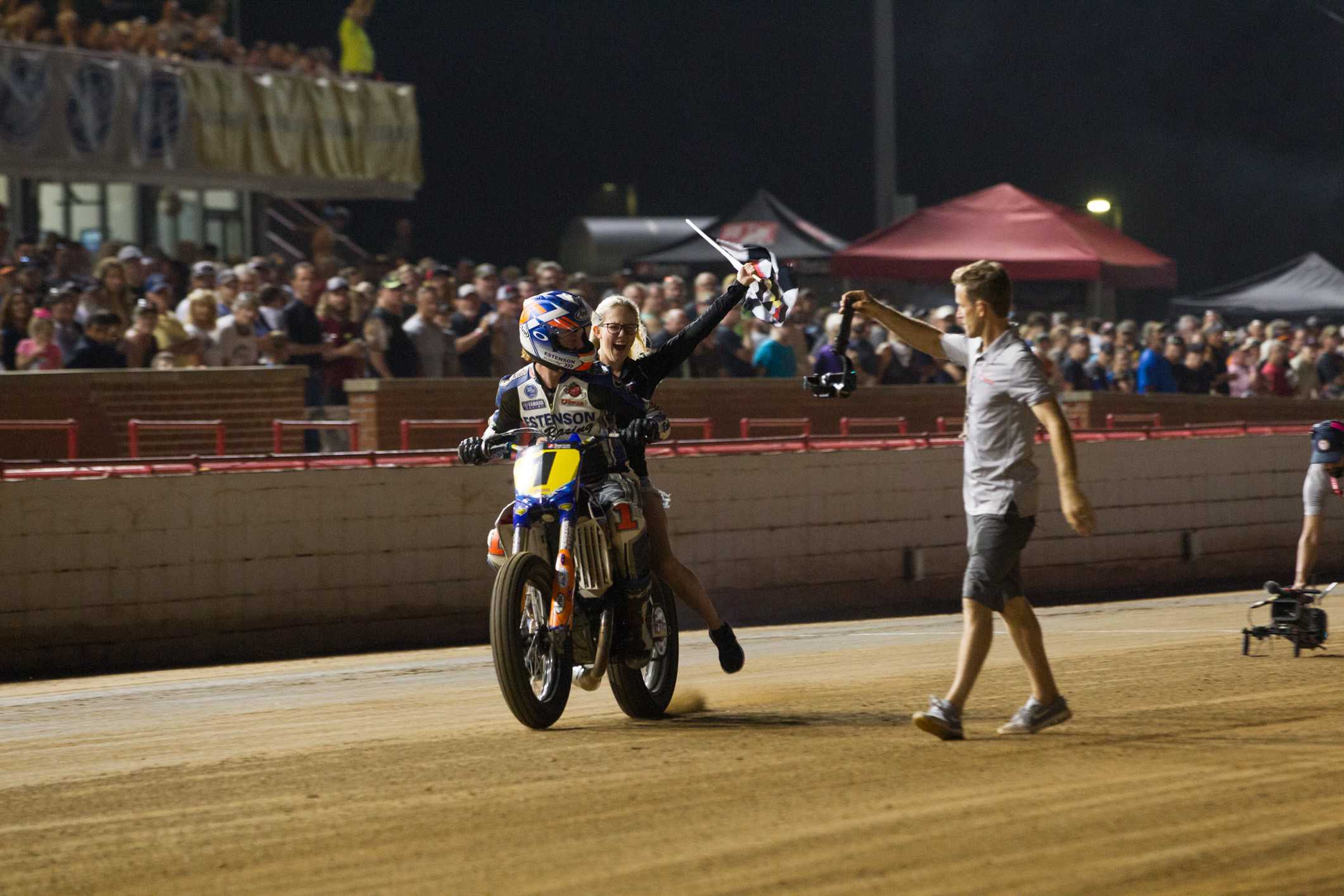 LEXINGTON, Ky. – Challenging at the front from start to finish, ST52 Racing’s Shayna Texter took a competitive third-place finish in Saturday’s Red Mile, the best American Flat Track Singles finish of the season for her Husqvarna motorcycle on a mile track.

Having the third choice of starting position for the 15-lap main event, the Pennsylvanian opted to start from the outside of the second row on her No. 52 Husqvarna FC450. With a focus on improving her race start performance, Texter put that concentration to good use as she made a great start in the main.

Texter went to the outside at the green light, running third by the first turn and moving to second in turn two. From that point, she led the race on many occasions as the top three riders shuffled positions on every lap. She ran third on the final lap looking to mount a charge to the checkered flag, but came up 0.049 seconds short.

“Man, that was tight the whole race long with Kolby [winner Carlile] and Kevin [Stollings],” Texter said. “It was great to be able to race guys you trust and respect. I felt if a could get a run off of turn four [on the last lap] I had a chance, but unfortunately, I gave them the gap they needed. I really want to get Husqvarna their first win, and it’s coming.”

The main event finish carried over where Texter left off in her semi. Starting on the outside of the second row, Texter got off second at the start and went to the lead on lap two of the eight-lap race. Going back and forth from the lead to third throughout the race, Texter’s final lap charge left her in a virtual dead heat at the finish. While she was classified as placing second, the official margin of victory was 0.000 seconds.

It was the third podium finish of the season for Texter, who took a pair of runner-up finishes on half-mile tracks. Texter formed her own team for 2018 – ST52 Racing – taking Husqvarna to its first season of AFT competition.

The Red Mile marked the sixth consecutive weekend of competition for Texter and her AFT competition, with the next race the Oklahoma Mile on Saturday, June 16.

“It’s been crazy, racing the last six weeks,” Texter said. “Now I’m excited to be able to spend a weekend off at home, see my sister graduate from high school and enjoy a picnic with my family. I’ve been going non-stop since the Rolex 24 At Daytona in January, spending a lot of time training to get ready for the season. Now I’m looking forward to a weekend at home.”

LEXINGTON, Ky – Estenson Racing’s Kolby Carlile left Springfield looking to back up his win at Sacramento and take another “W” on the Mile at Kentucky on his Yamaha YZ450F. However, a personal tragedy – his young dog Jax passing right before the event – made earning that win so much more important; and more personal.

The untimely loss of his young pet was a tough blow for Carlile and those close to him, but the defending AFT Singles Champion dug deep and he and the team came together for the common goal of going after that win. Even though a slick, narrow groove was predicted, it really meant that riders and their crews had their work cut out for them. Carlile did his homework earlier in the day during practice and qualifying and went on to score a pair of seconds, in both the Heat and Semi, but that was one short of what he was looking for in the Main. As to be expected in the AFT Singles class, it was an absolute dogfight from start to finish, with three riders trying to lead each lap. Carlile put everything he had into it and came away with the win by .012 of a second.

“Absolutely amazing. Just so many emotions. It’s awesome to get a race win, but when you’re emotional and you’re trying to win for and my family…(choked up)

“We had a terrible week leading up to this race, but last night I promised Samantha that I was going to win today and I was going to give her and Jax’s jersey a victory lap. I kept my promise. There were a few times today where I wasn’t sure I was going to be able to do it. Even in that Main event, I started to fall off the pace a little bit. But I really put my head down and charged hard and got back up to the lead. I made a pretty big move on the last lap. It’s not what I planned strategy-wise, but somehow it worked out for the race win, so that’s awesome.”

Jake Johnson Has His First Go On The Indian

LEXINGTON, Ky. – After a tough start to the season, Jake Johnson and the Estenson Racing squad decided to try something different at round eight of the American Flat Track AFT Twins Championship and broke out their Indian Scout FTR750s.

In just his first race on the new bike, Johnson was able to score a top-10 finish and regain some of his confidence back. Some bad luck, a big crash in Texas and a struggle to find the right setup on his Twin, had taken its toll. The key objective then became to get the two-time Grand National Champion back to being comfortable on a motorcycle again.

He had a solid third-place finish in the Heat, followed by a fourth-place finish in the Semi. When it came down to the Main event, it was an all-out war on the slick, narrow-grooved track. Not quite comfortable on his new steed, Johnson chose discretion over valor and avoided making big mistakes to finish ninth. Although it wasn’t the result a former champion looks for, it was the right move in the right direction for Johnson, and he and the team are very encouraged by the bike’s potential.

“I think we learned a lot about the new bike today. Had some issues here and there. I guess that’s part of riding a new bike. But it felt really good, we were just a little bit off. The track was tough today, so it was hard to push too hard. You didn’t want to make too many mistakes. After that restart, I kind of got up in there for a little bit, but towards the end just kind of faded back.

“The biggest thing I noticed was that I never really found the limit today. So that was good. I think a lot of it is just kind of building some confidence back and things like that. Like I said, we learned a little bit about these things today, that should help us in Oklahoma. I think we’ve got something to build on.”

After winning each Semi, Mees and Smith earned the top starting positions for the Main. Mees jumped out to an early lead and steadily increased his lead on Smith. Baker, who had a tough start from the third starting position, battled his way from the middle of the pack to the third-place position. After a red flag restart, Mees again stretched the gap between he and Smith, while Baker battled with Indian privateer Henry Wiles (Wilco Racing/Willy Built/Bandit Industries) and secured the final podium position by .008 seconds.

“The team was awesome tonight. It felt good to get another win and our first Wrecking Crew sweep of the season,” said Mees. “It was one of those nights where the Scout FTR750 was just incredible.”

“The track was fast with a challenging and narrow groove. But Mees came out dialed in and ran the line to near perfection,” said Gary Gray, Vice President – Racing, Technology & Service for Indian Motorcycle. “Our factory and privateers are consistently competing race-to-race, and we look forward to seeing what the OKC Mile brings us in two weeks.”

Through eight races, Mees holds a commanding lead with 170 points, while Wiles ranks second with 116 points. Baker’s third-place finish moves him up the leaderboard from sixth to third overall, with 101 total points. Carver and Coolbeth rank fourth and fifth with 99 points. Meanwhile, Smith is pushing his way up the leaderboard after suffering a broken left fibula and missing two races. Since returning three weeks ago, Smith has reached the podium twice and had a top-five finish. He currently ranks ninth with 73 total points.