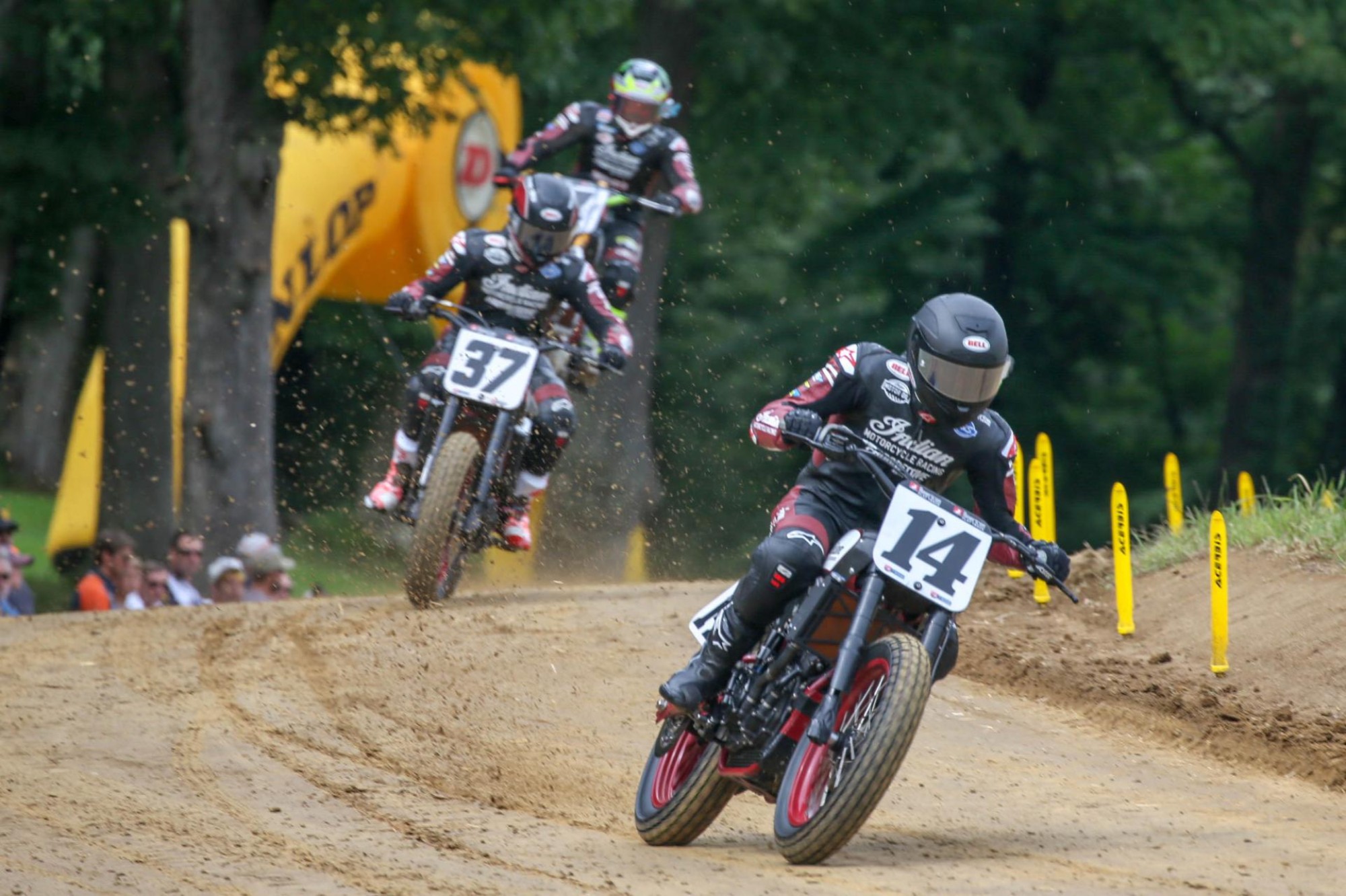 The
victory was Bauman’s fourth triumph of the ‘19 American Flat Track
season. It also just so happened to be the first time any rider other
than “the King of Peoria,” Henry Wiles (No. 17 Bandit
Industries/DPC Racing/Wilco Racing Indian FTR750) had stood atop the
premier-class podium here going all the way back to 2003.

Wiles,
who had assembled a truly remarkable 14-race Peoria TT win streak
coming into this year’s event, was forced to watch from the fences after
undergoing surgery for an injury suffered less than two weeks ago at
the Black Hills Half-Mile.

With Wiles out of the running, the race quickly took shape as a battle of brothers. Briar and younger brother Bronson Bauman
(No. 37 Indian Motorcycle/Progressive Insurance FTR750) appeared to be
on a collision course in Turn 1 of the opening lap around the Peoria
Motorcycle Club’s 5/8-mile TT track.

While
they both made it through cleanly, that feeling of an imminent
collision wouldn’t go away for the next 10 or so laps. The two went back
and forth up front, ripping the lead away from one another multiple
times before Briar finally muscled his way back into first in Turn 4 on
lap 9. Bronson again looked to counter, but Briar strung together a few
perfect corners to stretch open a small gap. He’d go on to build that
advantage up to just over a second before first encountering lapped
traffic on lap 13 of 25.

That
padding allowed him to be aggressive as he cut his way forward,
eventually lapping all the way up to eighth position and backing down to
a 2.967-second margin of victory at the checkered flag.

After
the race, Bauman said, “I was trying to just be as smooth as possible
and not hit any of these holes and get too out of shape. It’s a
bittersweet win… What could have happened between Henry and I? He owns
this place, and I give a lot of respect to him. You don’t do something
like that without being the greatest guy to ever race here. Hopefully
next year we’re both healthy, and we can give the crowd a show.”

Bronson cruised to second, taking the position with nearly five seconds in hand on third place.

It was a different story for the final spot on the box, however. A titanic final lap showdown ultimately saw JD Beach (No. 95 Estenson Racing Yamaha MT-07 DT) storm past both Robert Pearson (No. 27 R/J Performance/Hite Trucking Indian FTR750) and defending champion Jared Mees (No. 1 Indian Motorcycle/Progressive Insurance FTR750) in a desperate lunge to the stripe.

Beach
had spent nearly the entire race looking for a way around Mees for
third before Pearson closed in and displaced him to fifth with a
lap-and-a-half remaining. Illinois-native Pearson also attempted to get
the better of Mees in a final corner attempt at a home-state podium, but
Beach was perfectly positioned to take advantage of their clash.

Beach finished 0.049 seconds ahead of Pearson, who in turn bettered Mees by 0.034 seconds.

It
was a costly double demotion for Mees, who ran in third from the Main
Event’s start until the final meters. As a result, he now trails Bauman
by 38 points (243-205) with just five races in which to make up the
deficit.

Daniels
got away in fifth but wasted no time in slashing his way through the
decorated pack. He drove up the inside of three-time Peoria TT winner Jesse Janisch
(No. 132 Roof Systems Dallas TX/Öhlins Yamaha YZ450F) for third on lap
2, providing an early demonstration of just how serious the youngster’s
challenge would be on this day.

Pre-race
favorite Janisch responded the next time around, but Daniels
immediately criss-crossed him and also overhauled offroad legend Ryan Sipes (No. 264 Red Bull/Leatt/KTM 450 SX-F) in one epic maneuver to take control of second.

Daniels then proceeded to run down reigning class champion Dan Bromley (No. 1 Red Bull KTM Factory Racing 450 SX-F) and dive up the inside of him the next time into Turn 4 to take the lead on lap 4.

Daniels
raced off into the distance from that point forward, ultimately sealing
his first-career AFT win in the same season he also claimed his
first-career MotoAmerica victory.

Daniels
said, “The track was pretty treacherous and slick today, so it was
really tough. I was just trying to find certain lines, and I think I
found a few before the rest of the guys did. My bike was just working so
good — it was perfect. I love my team and everything they’ve done for
me, and also all the people who have helped get me to this point even
before this year. I’ve been dreaming of this my whole life, and to do it
so soon… We’re just going to keep going.”

Bromley held on for a solid second, which, when factored in with the sixth-place finish of Dalton Gauthier
(No. 122 D&D Cycles/Gobert Smash Husqvarna FC450), sees the two
riders sit equal atop the points chase (216-216) with just four races
remaining to decide the 2019 AFT Singles crown.

Janisch was heading in the wrong direction midway through the Main, being passed by both James Rispoli (No. 71 Vance & Hines/My Digital Listing.com Honda CRF450R) and Jacob Lehmann (No. 14 Vince and Denise Holt/Ridemotorsports Honda CRF450R).

Despite
sitting fifth with just a couple short laps remaining, Janisch dug
deep. He fought his way back past ‘14 Peoria TT winner Lehmann, and then
snuck past Rispoli — who was nursing a flat tire the last two laps —
by a scant 0.003 seconds at the checkered to steal away the final spot
on the podium.

Rispoli
was forced to accept fourth, followed by Lehmann in fifth and Gauthier
in sixth. Buffalo Chip TT winner Sipes finished a further spot back in
seventh.

Don’t miss the feature broadcast of the Law Tigers Peoria TT on NBCSN
with flag-to-flag coverage of both Main Events, enhanced by exclusive
features and cutting-edge aerial drone and onboard footage. The
broadcast will first air on Saturday, August 31, at 7:00 p.m. ET/4:00 p.m. PT and will re-air on Wednesday, September 11, at 2:00 p.m. ET/11:00 a.m. PT.

NBCSN and FansChoice.tv
are the official homes for coverage of American Flat Track. For the
2019 season, NBCSN’s coverage of AFT moves to highly-coveted, weekend
afternoon programming slots within two weeks of each event. The complete
schedule for AFT on NBCSN can be viewed at http://www.americanflattrack.com/events-nbcsn/.
FansChoice.tv remains a cornerstone of AFT’s digital strategy,
providing live streaming coverage of every event on AFT’s live page
while previous events and exclusive features are available on AFT’s VOD
page.