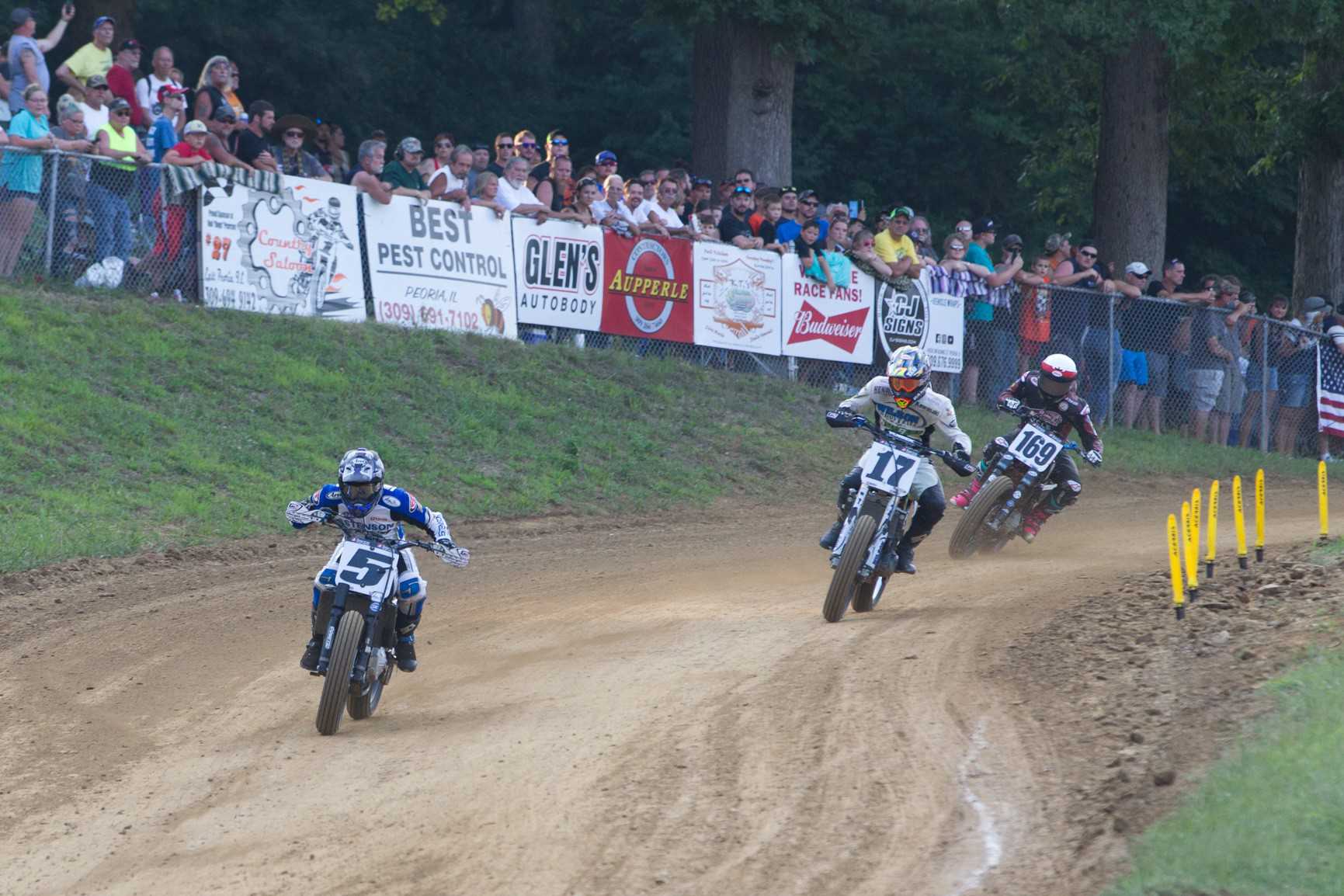 Johnson, who trains regularly on Motocross tracks, is quite at home on the TT course at the legendary Thunder Valley. He had a good start to the day, qualifying third and taking home the win in his Semi. In the Main Event, Johnson got off to a great start in second, but at the end of the day it was a race for third as “King Henry” was unbeatable for the 14th-consecutive year at the Peoria TT.

Although he was hoping for better, the two-time Grand National Champion is happy with the building momentum that has him feeling back to his former self – fighting for podiums and wins. He also continues to get more acquainted with the Indian Scout FTR750 and sees more areas to improve his setup.

“I knew I was a little bit off of Briar [Bauman] and Henry [Wiles] all day. Within a few laps, I knew Henry was coming. He was able to get by and I just kind of knew it was a race for third at that point. I knew I wasn’t going to catch those guys so I was just trying not to make any huge mistakes. Towards the end of the race I saw that Jared [Mees] was getting a little bit closer. When the five-to-go board came out, I just put in a last charge; gave it everything I had those last five laps. I’m not sure how close he got, but I was able to hold him off.

“It’s great to be on the podium, but I wish I could have been a little closer, at least been able to battle it out with Briar for a little bit. Just didn’t quite have the pace today. I think we learned some things that we can work on. So I’m happy. Coming off a podium at X Games, the win at Buffalo Chip – we’ll forget about Rapid City – and back on the podium here. I feel like we’re back where we belong. It’s definitely helped build the confidence and hopefully finish the rest of these Half-Miles and Miles strong.”

PEORIA, Ill. – Frustration is mounting for reigning AFT Singles Champion Kolby Carlile as he unfortunately suffered another DNF during the 2018 American Flat Track season with a mechanical issue at the Peoria TT.

Carlile went into the weekend confident that he could return to the podium on his Estenson Racing Yamaha YZ450F. He put some hours on the practice bike during the week and felt like more time riding was exactly what he needed to take that top spot on the podium at Thunder Valley. Unfortunately, though, bad luck struck again on more than one occasion.

A mechanical in the second session of qualifying shook that confidence, but Carlile recovered in time for the Main Event. He got a great start from the second row and made his charge towards the front, but then more mechanical woes forced Carlile to retire from the race.

Amidst all the frustration, Carlile looks to put Peoria and the recent string of bad luck behind him and move forward at one of his favorite venues – the Springfield Short Track.

“It was just a frustrating day for me. I put in a lot of work this week riding. I felt like it was going to carry into the weekend. In qualifying I felt really good, but then we had a little mechanical there. It was kind of in my head after that one. Then, in the Main Event, I got a good start and I probably passed six or eight people in the first corner. I came out from the second row in fourth place and I felt amazing.

“It turned out, though, that we had an issue going on with the clutch. Eventually in the race, after about halfway, the clutch completely went out and it spun me around backwards and I crashed. At the time, I thought it was my fault, but when I picked up the bike to finish the race, I realized it was the clutch that went out. So, it’s just frustrating. I’ve been putting in a lot of extra work, and I really expected a good result today. But I’m putting all of that behind me and looking ahead to Springfield.”