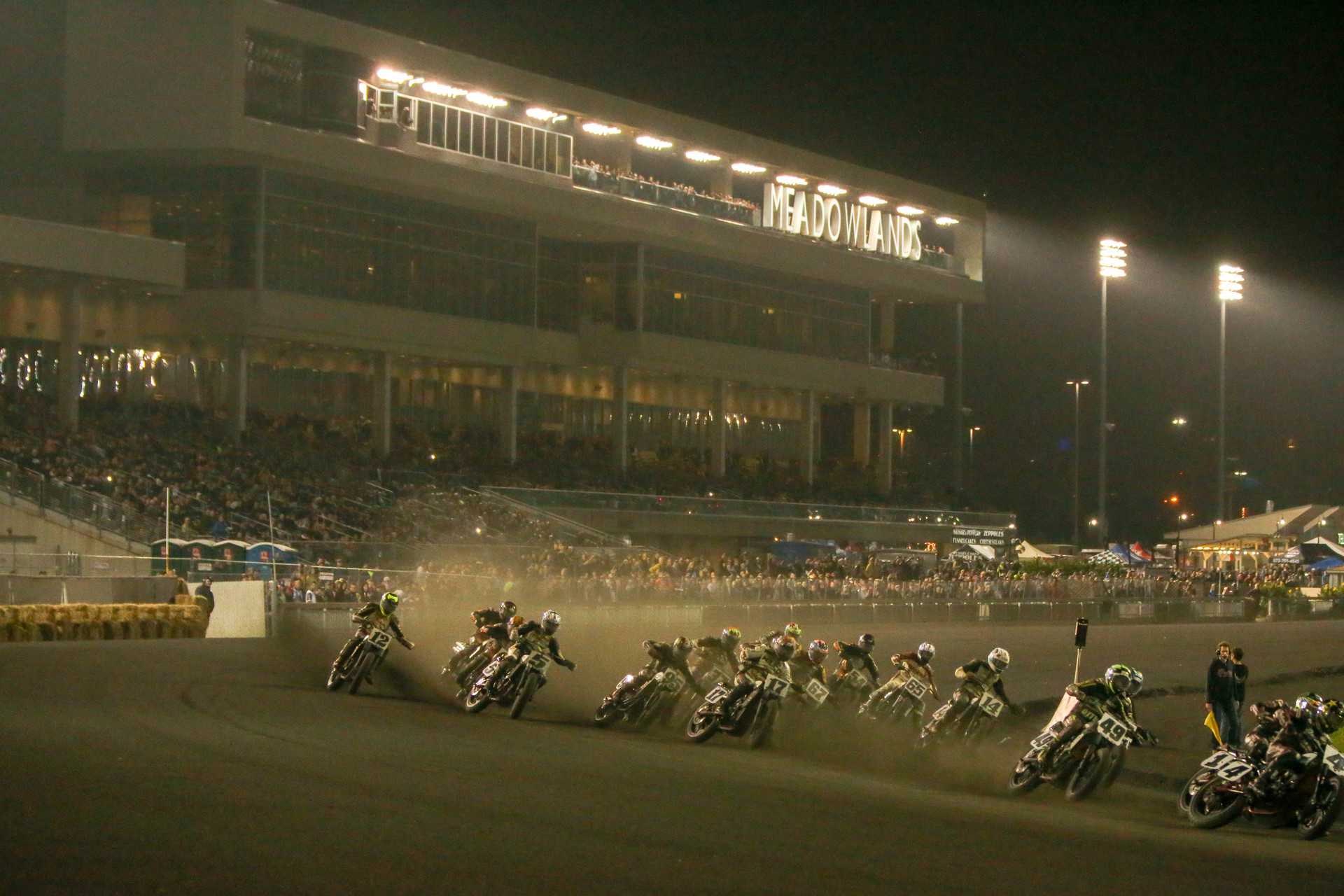 EAST RUTHERFORD, NJ. (October 7, 2018) – American Flat Track closed out an historic 2018 in East Rutherford, N.J. on Saturday night with a pair of barn-burning AFT Twins presented by Vance & Hines and AFT Singles races. The first-ever Meadowlands Mile presented by Ducati definitely left fans counting the days to the 2019 season after a pair of living legends – and a pair of soon-to-be legends – battled inches apart at triple-digit speeds for 25 and 15 laps, respectively, around the unique, multi-line and highly challenging Meadowlands Mile circuit in contests not decided until the season’s final corners.

Mees has reigned over the AFT Twins class with an iron wrist for the majority of the past two seasons, storming to a pair of dominant AFT Twins national championships. Smith, meanwhile, suffered in his wake, at one point going more than a calendar year between victories. He put an exclamation point on his late-season resurgence in Saturday’s thrilling showdown, however, closing out his 2018 campaign with three victories in the final four races.

After the two went back and forth throughout the AFT Twins Main, the drama was somehow escalated even further when Jeffrey Carver Jr. (No. 23 Roof Systems of Dallas/Indian of Metro Milwaukee Scout FTR750) and Briar Bauman (No. 14 Zanotti Racing Indian Scout FTR750) joined the party with just a lap and a half remaining.

A surprise move by Carver on Smith appeared to provide Mees the room he needed to escape, but Smith immediately countered and stuck it up the inside of Mees heading into Turn 3 for the final time. From there he powered to the checkered flag clean after Mees ran wide in Turn 4 in a desperate search for traction. Carver ended up third, with Bauman close behind in fourth.

“My bike was dialed all day,” Smith said. “Hats off to my crew; the Indian was just on rails for me today. I was sitting behind Jared just waiting to the end. I didn’t want to show him what I was doing because I thought I was better. I was just kinda chillin’ behind him and waiting, and it’s not often you can sit behind that guy and wait because normally he takes off and hides. I’m stoked that my bike worked so good, and I’m pumped at myself that I was able to hold it together and make the move on the last lap when it counted.”

Despite coming up short on Saturday, Mees walked away from 2018 with an astonishing 10 victories, 15 podiums, and a 93-point championship margin over 18 races.

The finale also marked the final race of another legend’s career, Kenny Coolbeth (No. 2 Nila Racing, Columbia Avionics Indian Scout FTR750), who once again proved he’s leaving on his own terms. He registered yet another competitive ride, rounding out his decorated career with a seventh-place performance.

“I have no regrets with how my career went,” Coolbeth said. “When things were bad, it just made me stronger. It made me the person I am today. I’m fortunate to have met some really good friends and raced with them. I would love to chase these guys around some more, but it’s over. I’ll do my motos during the week, and maybe come out and watch these guys on the weekends sometimes.”

The AFT Singles season finale was an instant classic, pitting two of the classes’ top guns against one another in a showdown to decide third overall in the 2018 championship rankings.

In the end it was Shayna Texter (No. 52 Husqvarna Motorcycles/JCS Racing FC 450) grabbing the checkered flag ahead of fellow ‘Mile Master’ Kolby Carlile (No. 1 Estenson Racing/McCandless Truck Center Yamaha YZ450F) by an impossibly tight 0.006 seconds. No one knew for sure who’d won when they first crossed the line.

Carlile made an early break from the pack and threatened to run away unchallenged. However, Texter emerged from the large group fighting for second just prior to mid-distance and ran Carlile down to the tune of half-a-second per lap.

Once they came together it was on. The two traded the lead multiple times, including four times on the final lap from Turn 3 to the finish line. Carlile drafted around the outside and appeared to inch by Texter on the home straight, but Texter found a bit of extra speed to nip back ahead by less than half a wheel.

The victory was Texter’s third of the season and the first-ever Mile win for the Husqvarna FC 450. The triumph also cemented her position as the AFT Singles class’ all-time winningest rider, upping her career tally to 14.

After the race Texter said, “It was incredible. It shows how much speed Kolby and I have out there to battle each and every week for two years in a row. I think this is Kolby’s final Singles race, so no better way to send him off into the Twins and the future than to battle bar-to-bar to the finish.

“It’s been an incredible year for us… Everyone has been like, ‘You’re so good on the Miles but you haven’t got a Mile win this year…’ But the ‘Flying Tomato’ has been on it. To get this Mile win at the end of the year… I’m super stoked.”

2018 AFT Singles champion Dan Bromley (No. 62 KTM North America/Bromley Motorsports 450 SX-F) concluded his season with another podium finish in third. Bromley managed to win out in a huge scrap for the final spot on the box despite the inherent disadvantage he suffers on the Miles due to his size.

The result was the 13th podium finish of Bromley’s epic, 2018 championship campaign.

For a thoroughly in-depth Meadowlands Mile experience with flag-to-flag coverage of both Main events enhanced by drone and onboard footage, be sure to catch the NBCSN telecast of the Meadowlands Mile on Sunday, October 21 at 2:00 pm ET (11:00 pm PT). Be sure to check your local listings, or for the complete broadcast schedule for AFT on NBCSN, please visit http://www.americanflattrack.com/events-nbcsn

Finally, don’t forget to catch the FansChoice.tv live stream of AFT’s season-ending Grand Awards Party on Sunday, October 7 at Manhattan’s Classic Car Club venue. The event will highlight the best of the 2018 American Flat Track series, from class champion presentations and other notable awards, to stunning video footage of the year’s best moments – and much more. There will also be announcements and breaking news that are sure to shake things up for the 2019 AFT season. Flat track fans will not want to miss the news and presentations, so be sure to catch it!

Live streaming of the AFT Grand Awards Party will be available on FansChoice.tv Sunday, Oct. 7 beginning at 5:30 pm ET (2:30 pm PT) at the following link: https://www.fanschoice.tv/watch-live/american-flat-track.

JD Beach, Jake Johnson Bounce Back For A Pair Of Top-10 Finishes At The Finale

EAST RUTHERFORD, N.J. (October 7, 2018) –After a rough start to the Main Event, Estenson Racing’s AFT Twins riders – JD Beach and Jake Johnson – fought their way back to finish sixth and 10th, respectively, at the American Flat Track season finale on the Meadowlands Mile.

The day started out rough for Beach. Coming in for the last two rounds of the season with a guest ride on the Estenson Racing Yamaha MT-07, there was a lot for Beach to adapt to. In addition to being his first Mile races since 2013, it was a new team and a pair of new bikes. But Beach and the team worked well together and made progress as the day carried on. Unfortunately, it was something as simple as tear-offs that set Beach back in the Main. His plan to conserve his tear-offs backfired, though, and he ended up losing valuable positions early. Undaunted, the 2018 MotoAmerica Supersport Champion fought his way back and was able to finish sixth, which was an improvement from last weekend at the Minnesota Mile.

As for Johnson, Estenson Racing’s mainstay in the Twins class, it was another up-and-down day, but like Beach, an improvement from Minnesota. It was a much better qualifying result for Johnson, and he felt much more comfortable on the Estenson Racing Indian Scout FTR750. With just one race left in 2018, the two-time Grand National champ went into the Main ready to let it all hang out on the cushion. That backfired for him, as well. Visibility was an issue if you got caught in the roost, and like Beach he lost positions early. Johnson worked his way back up to finish in the top 10. Now that the season is done and dusted, Johnson looks forward to 2019.

“On the second lap when I went to wipe off my helmet faceshield, I guess leather gloves don’t wipe dirt and rain off too well, so it smeared my tear-off going into turn one. I couldn’t see a thing, and I got passed by three or four guys, including Davis Fisher. The back of his suit is all yellow, so I could kind of see a bright color to follow. I got through turn one and two and was pulling tear-offs then started making some ground again.

“I felt really good, and we improved from last weekend. I was able to come home with a sixth. It was definitely better [than Minnesota]. Not what we wanted, but from where we started the day out in 20th, to finish sixth is great. The guys, Mike [Stauffer] and Scott [Campbell], worked hard all day, so it’s awesome. I think we can end the year proud with that and see what we can do next year.

“Going into the Main event I was just, ‘Last race of the year, I’m going for it.’ I lined up on the outside. I knew there was going to be some cushion there for at least the first few laps. I’m like, ‘That’s my best chance. I’m just going to the top.’ But I just got hung out there and got roosted, and I couldn’t see. I filed in somewhere in the back and was able to get a good line. Once everybody kind of single-filed out, I was able to make some passes and come up through. Then, a little bit before halfway, I just kind of stalled out.

“We ended up tenth, so way in the back. Obviously not what we wanted. I think we had some issues here and there, but we showed some speed today, which I think was good. This is typically a track I’m not that comfortable with. In the Main event, until it all kind of went wrong, I was feeling pretty good. Next year.”