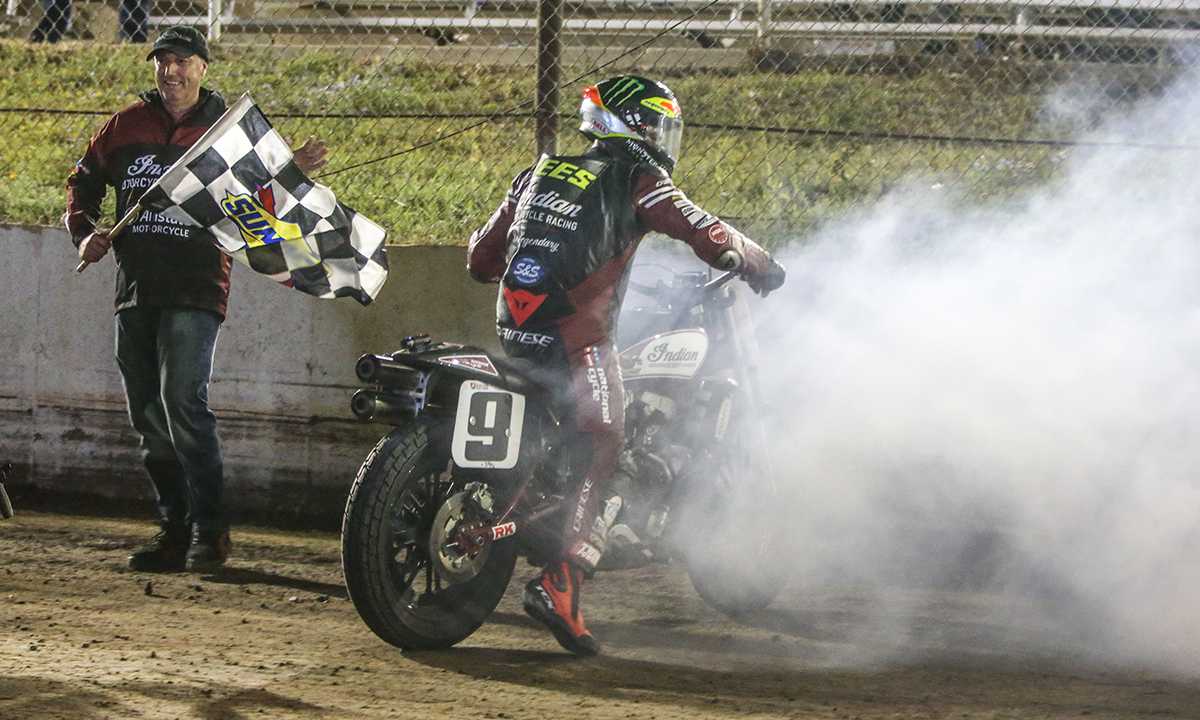 Mees systematically dismantled the competition around Black Hills Speedway aboard the No. 9 Indian Motorcycle Rogers Racing Scout FTR750 not once, but twice, during the course of the Main Event.

The AFT Twins presented by Vance & Hines points leader saw a two-plus second advantage wiped clean when a red flag momentarily halted the action just after the race’s halfway point. Undaunted, Mees simply reenacted his earlier escape, quickly assembling just enough of a gap to break free of the scrap for second. He would eventually sail past the checkered flag without any real fear of coming under assault from behind.

Thirteen races into the 19-race season, Mees boasts seven wins, 11 top-twos, and 12 podium results. Not surprisingly, that sort of consistent excellence has allowed the three-time Grand National Champion to pile up a 36-point championship advantage with just five races left to be run.

Factoring in his Sunday second at the Buffalo Chip TT, Mees racked up a crucial 45 points over two fruitful days at the 77th Annual Sturgis Motorcycle Rally.

After scoring the 27th victory of his illustrious career, Mees said, “We actually made a small change for the Main Event even though we were already pretty fast. We were quick but we all put our heads together and decided that making that gamble was the best call — and it was.

“We had a solid bike and were able to get out front and run our own race. Last year, Bryan (Smith) and I battled here, and I know how you can get slowed up battling. So I let those guys do the battling behind me, and I just ran my own race.”

The Indian Wrecking Crew returned to its early-season field destroying form on Tuesday night. Teammates Bryan Smith and Brad Baker engaged in a wall- and elbow-grazing dogfight for second aboard their respective No. 1 and No. 6 Indian Motorcycle Racing backed by Allstate Scout FTR750s.

While it took him a few laps to find his groove following each of the Main’s twin starts, Smith ultimately got the better of Baker and successfully minimized the damage done by Mees in the points column.

Mees, Smith, and Baker combined to secure Indian Motorcycle’s fifth podium sweep of the season. Additionally, Baker’s third-place finish also elevated him to third in the title chase, positioning the manufacturer that much closer to a championship top-three lockout.

Smith’s runner-up finish was much needed as it marked his first podium in five outings. After the race, he said, “Unfortunately, Jared beat us, but it’s cool to see Indian sweep another podium.

“I thought I had something for Jared after the restart. But he could get going quick, and it took me about five laps to get going, and it was all she wrote after that. (Brad and I) were both on top of each other and on top of the wall. There wasn’t an inch between us quite a few times. My hats off to him for racing me clean. It was fun. I wish it would have been for the lead, but I’m sure Indian Motorcycle is happy with this result.”

Third-placed Baker said, “I feel pretty good. I felt like I matched Jared’s pace pretty good in the beginning, but he was just rolling really good here today… he’s been rolling good all year.

“I lost Jared before the restart. He was gone. But after the restart, I felt like I had a good line going into 3, but it opened up the door for Bryan to do a slide-job on me. And as soon as he did that, we went back to dicin’, and Jared pulled away again.”

Brandon Price (No. 92 Brandon Price Racing backed by Parkinson Brother’s Racing/DPC Racing/Don’s Kawasaki Honda CRF450R) won out following a thrilling AFT Singles shootout that saw the race’s top seven riders all finish within a second of the winner at the checkered flag.

Up front, the contenders routinely traded positions and stormed the corners two, three, and even four abreast as they jockeyed for position.

Price eked open a small gap to open the final lap, but bucked on acceleration as he searched in vain for traction to launch off the last corner in the final sprint to the flag.

That minor miscue allowed a resurgent Shayna Texter (No. 52 Richie Morris Racing Honda CRF450R) to close in rapidly as they approached the stripe, but Price managed to hold her at bay by a scant 0.049 seconds.

Price’s second win on the season bumped him up to the runner-up spot in the AFT Singles championship race, 16 points back of Texter.

Price said, “The race was really good. The track was really hooked up except for coming off Turn 2, but I used that to my advantage and gained on them every lap.”

While disappointed not to have won, Texter’s runner-up was an important result in the bigger picture. Not only was it a successful rebound from Sunday’s zero score at the Buffalo Chip TT, it also came on an evening in which she appeared to be entirely out of sorts… at least until it mattered the most.

Texter skirted around the outside at the start of the race to immediately slot into second from her second-row grid position, and she proved a serious contender for the win from that point forward.

The 20 points she picked up as a result of Tuesday’s finish also provides something of a safety net with another TT on the horizon.

Texter said, “It was a miserable day, quite honestly. Our main bike wasn’t running right all day in qualifying. I finally made the gamble to switch to my back-up bike for the Heat race. It was such a long, frustrating day. At the Buffalo Chip, I knew I wasn’t a TT rider, but at these Half-Miles, I feel like we can contend each and every weekend. But if there’s anyone out there I don’t mind losing to, it’s Brandon Price. He’s one of the nicest kids in the pits, and this is a great win for him.”

The Black Hills Half-Mile will air on NBCSN on Thursday, September 14 as part of a doubleheader with the Buffalo Chip TT at 10:00 p.m. ET (7:00 p.m. PT) and the Half-Mile at 11:00 p.m. ET (8:00 p.m. PT). The full schedule for American Flat Track on NBCSN can be viewed athttp://www.americanflattrack.com/events-nbcsn

American Flat Track will complete its run of four races in 15 days at the fabled Peoria TT on Sunday, August 13. Live coverage of the Peoria TT can be viewed on FansChoice.tv beginning at 11:30 a.m. ET (8:30 a.m. PT) with Opening Ceremonies scheduled for 2:30 p.m. ET (11:30 a.m. PT). Tickets are on sale and can be purchased at http://www.peoriamotorcycleclub.net/.

NBCSN and FansChoice.tv are the official homes for coverage of American Flat Track events. All 18 rounds, from the season-opening Harley-Davidson DAYTONA TT to the American Flat Track Finals in Southern California, will air in one-hour primetime telecasts throughout the summer and fall on NBCSN. FansChoice.tv remains a cornerstone of AFT’s digital strategy and provides live streaming coverage of every event.

More, from a press release issued by Indian Racing:

During the Black Hills Half-Mile Main Event Mees built a lead of over two seconds before a red flag called for a restart. Mees continued his incredible performance and got out well ahead of the field during the restart, while Smith and Baker battled for second.

“With two races in three days, we all had our work cut out for us and my team did an incredible job prepping the Scout FTR750,” said Mees. “With six races remaining, we feel we’re hitting our stride and are putting ourselves in a good position to bring home the championship.”

Through 13 races this season, Indian Motorcycle Racing and the Scout FTR750 have secured 29 of the season’s 39 podiums. The Indian Wrecking Crew holds the top three positions in the season’s point standings with Mees at 272, Smith at 236 and Baker jumping back into third with 196 total points.

“For our team to sweep the Black Hills Half-Mile after running a challenging track at the Buffalo Chip TT just two nights earlier says a lot about their commitment and preparation,” said Gary Gray, Vice President – Product for Indian Motorcycle. “It’s no secret the Wrecking Crew is the team to beat. And despite that, Jared, Bryan and Brad continue to bring their very best at each and every race. With six races remaining, we’re making a strong push for the Manufacturer and Individual Championships.”

Indian Motorcycle Racing, backed by Allstate Insurance, will look to continue its incredible run as American Flat Track heads to the Peoria TT on August 13.