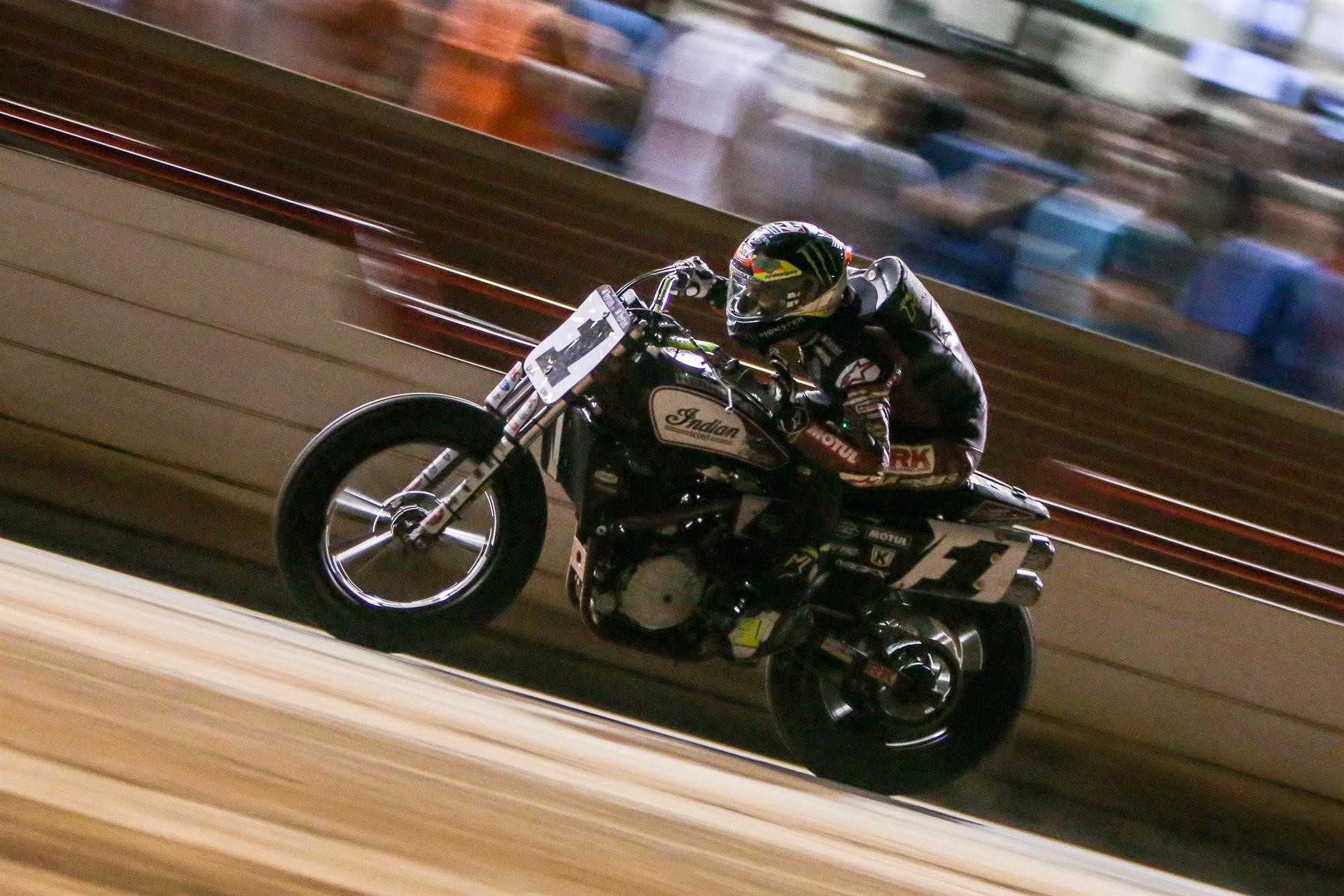 Smith and Baker finish 2-3; Carlile gets second Singles win over Stollings and Texter

Mees rode as if he were eager to immediately reconstruct his aura of invincibility aboard the No. 1 Indian Motorcycle Rogers Racing SDI Scout FTR750. Saturday’s performance in Lexington, Ky., went a long way toward doing just that, serving as a strong reminder of what the last calendar year of American Flat Track racing has looked like.

On a night in which an exceptionally narrow groove repeatedly saw riders make one costly mistake after another, Mees was a marvel of technical proficiency. While the rest of the field was forced to gamble on risky passing maneuvers that could just as easily backfire and result in the loss of ten positions as they could gain them one, Mees simply powered away out front.

Teammate Bryan Smith (No. 4 Indian Motorcycle Racing backed by Allstate Scout FTR750) was the only rider who could keep Mees in his sights for even as long as a complete lap, as the duo broke the challenge of the remainder of the field right from the start. Smith’s own pursuit slowly and steadily unraveled too, as the inch-perfect Mees slipped away tenth by tenth.

Smith was given a second chance to keep pace with Mees when a red flag forced a restart following 10 of 25 miles, but the result was identical the second time around as well.

Dating back to Mees’ victory in the series’ inaugural trip to the Red Mile one year ago, the defending AFT Twins presented by Vance & Hines champion has notched 14 victories in the last 20 Main Events.

After the Red Mile, he said, “On a track like this, it was so technical and so important to carry good corner speed on entry and through the corner and not bust the groove. If you got off that groove, you were a sitting duck and going backwards quick. But I kinda grew up on this stuff, and I guess out of all the racetracks we race, this is my specialty.

“It was good. We were in a really good starting position, we were able to come off the line well, and just put in the laps. The bike worked phenomenally as it has all year. Hats off to my entire team. I don’t know what to say. We’re having a great season, and we’re making it happen week-in and week-out.”

While Mees (and runner-up Smith) successfully avoided drama on a circuit that practically demanded it, the rest of the field did not. The scrapping and resultant emotions down the order were heated as hard passes were the norm from third on back.

Brad Baker (No. 6 Indian Motorcycle Racing backed by Allstate Scout FTR750) held down the position for much of the second half of the race until Henry Wiles (No. 17 Bandit Industries/Wilco Racing/Willy Built Indian Scout FTR750) stole the spot on the penultimate lap. Baker responded, however, and locked down third at the flag by a meager 0.008 seconds.

While Indian Motorcycle has arguably been even more dominant in 2018 than in 2017 thanks to a powerful privateer contingent, tonight’s result was the first time this season the Indian Wrecking Crew pulled off the podium sweep they made so commonplace a season ago.

Still a race short of the season’s midway point, Mees now leads the championship by more than two full races, 170 to Wiles’ 116. Baker is third at 101.

Carlile, Stollings, Texter, and Jesse Janisch (No. 132 Roof Systems/West Bend Harley-Davidson-backed Yamaha YZ450F) made an early escape from the pack and settled into a four-way dice for the lead. By mid-distance Janisch slowly faded from the fray, leaving just the three to decide the win among themselves.

Each rider was playing all the angles, sorting through strategies on the fly while simultaneously measuring up respective weaknesses. Despite that, in the final desperate push to the stripe, Carlile found himself where none of them wanted to be – out front coming off the final turn – but still somehow made it work. He took the checkered flag a scant 0.012 seconds ahead of Stollings, with Texter another 0.037 seconds back in third.

He said, “I’ve got to give it up to Shayna and Kevin. We kept it clean, and it was a great battle; the fans loved it I’m sure. It came down to the wire… Coming off of (Turn) 4, I didn’t think I was going to win. I was hoping one of these two would pass me down the backstretch, but they were a little smarter than me, passing up the frontstretch. But it worked out. I can’t thank my team enough. Hopefully we’re back up here soon.”

Janisch continued on to a lonely fourth, while Jordan Harris (No. 17 S&J Coal/Roybuilt Honda CRF450R) completed the top five after winning out in a massive eight-rider tussle for the position.

Championship leader Dan Bromley (No. 62 KTM North America/Bromley Motorsports 450 SX-F) was among that big pack, finishing ninth. The result marks just the second time all season long he’s finished off the podium. Despite that disappointment, Bromley actually expanded his championship advantage due to the absence of the mending Brandon Price (No. 92 Parkinson Brothers Racing/DPC Racing Honda CRF450R), who still ranks second. As a result, Bromley now leads by an expansive 28 points following eight of 18 races.

Following six straight weeks of race action, American Flat Track will take a single weekend off before traveling to Oklahoma City, Okla., on June 16 for the OKC Mile Presented By Indian Motorcycle of Oklahoma City where the AFT Twins competitors will complete their run of five consecutive Miles. Live coverage can be viewed on FansChoice.tv beginning at 3:00 p.m. ET with Opening Ceremonies scheduled to kick off at 7:00 p.m. ET. Tickets are on sale now and can be purchased at OKC Mile Tix.