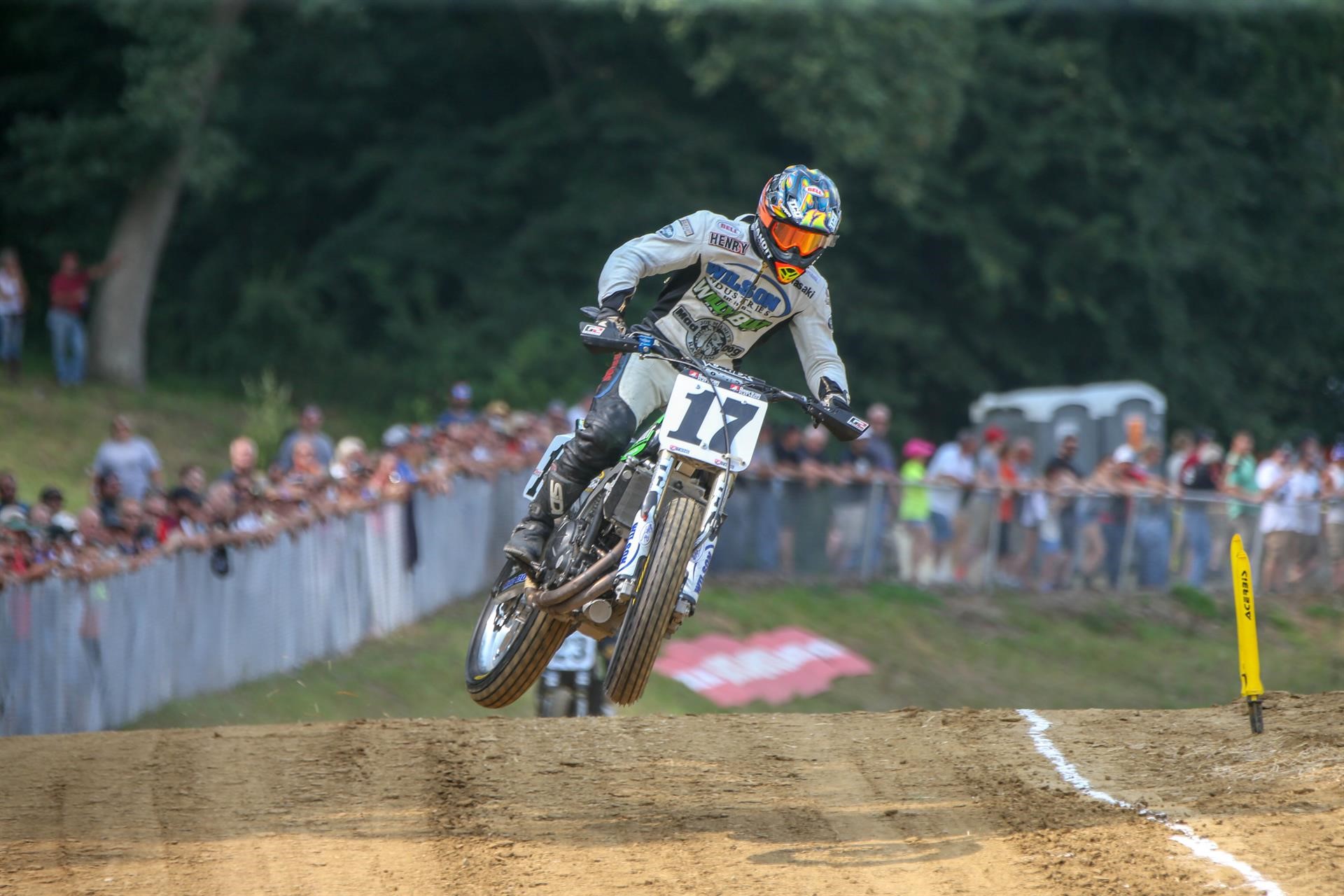 Wiles made relatively quick work of Mees and Johnson, but Bauman put up a serious fight for the lead. Wiles tracked Bauman down and was breathing down his neck by lap five. But it wasn’t until the end of lap eight he finally found an opening, slashing beneath Bauman as they exited the final corner. Bauman immediately mounted a counterattack, storming back in front of Wiles as they negotiated the very next corner. Wiles was ready for the move, however, holding his line and reclaiming the position moments later.

From there Wiles proved too strong, slowly and steadily building an unassailable advantage en route to the historic win. His 14th triumph at the Peoria Motorcycle Club’s Race Park puts him ahead of the “Prince of Peoria” Chris Carr for most ever American Flat Track wins at the venue.

After the race Wiles said, “I found myself as far back as I ever have in a Main here. I was able to wiggle my way through fairly quickly. Briar had a really good pace today, and he got going really quick at the front. I had to pick my way through. I got about a guy a lap getting to him. It was great having everyone behind me – the whole Peoria Motorcycle Club and so many fans cheering me on. It feels so awesome.”

Not only did today’s win keep Wiles’ remarkable win streak intact, it also kept his slim title hopes alive, if only just. Mees leads him by 92 points (305-213) with four races and 100 points left in play on the 2018 slate. Wiles is the sole rider remaining with even a remote mathematical chance of preventing the reigning Grand National Champion from repeating.

2016 class champ Ryan Wells (No. 94 RMR/Al Lamb’s Dallas Honda CRF450) grabbed the early advantage but a minor bobble was all it took to open the door for TT aces Cole Frederickson (No. 73 Vince & Denise Holt, Ride Motorsports CRF450R) and Janisch.

Janisch then stalked new leader Fredrickson for a pair of laps before striking; in a superior display of racecraft, Janisch set Fredrickson up with a fast, sweeping line leading into the jump where he overtook him as the two sailed through the air.

Janisch pulled free en route to victory from there. Frederickson, meanwhile, was ultimately dropped to third by Wells, who regrouped from his early mistake to steal back the runner-up position.

While it may have been Janisch’s first victory of the season, the result was anything but a shocker considering it was his third Peoria TT victory (’15, ’17, and ’18).

“It was awesome,” Janisch said afterward. “Wells had the lead and Cole was second. I found a good line in Turn 1. I was just kind of waiting when Wells hit a big hole. Cole got underneath him, and I knew I needed to make a move on Wells right away. I sat behind Cole for a while, and I kind of got into him in Turns 1 and 2. I made the move and got him over the jump. Then I just tried to put my head down for like two laps. When I looked back, I had a little bit of a gap and tried to relax because was easy to make mistakes on the track today. Hats off to my whole team.”

For a thoroughly in-depth experience with flag-to-flag coverage of both Main Events enhanced by drone and onboard footage, be sure to catch the feature telecast of the 72nd Peoria TT when it debuts on NBCSN at prime time on Saturday, September 1 at 3:00 pm ET (12.00 pm PT).

American Flat Track heads to Springfield, Illinois on September 1 and 2 for the Springfield Short Track and the 100th running of the Harley-Davidson Springfield Mile II at the legendary Illinois State Fairgrounds. Known as the ‘Fastest Mile in the world,’ the Springfield Mile promises some of the best bar-to-bar and drafting action of the season. Tickets for both events are available here, and are absolute must-see flat track experiences.