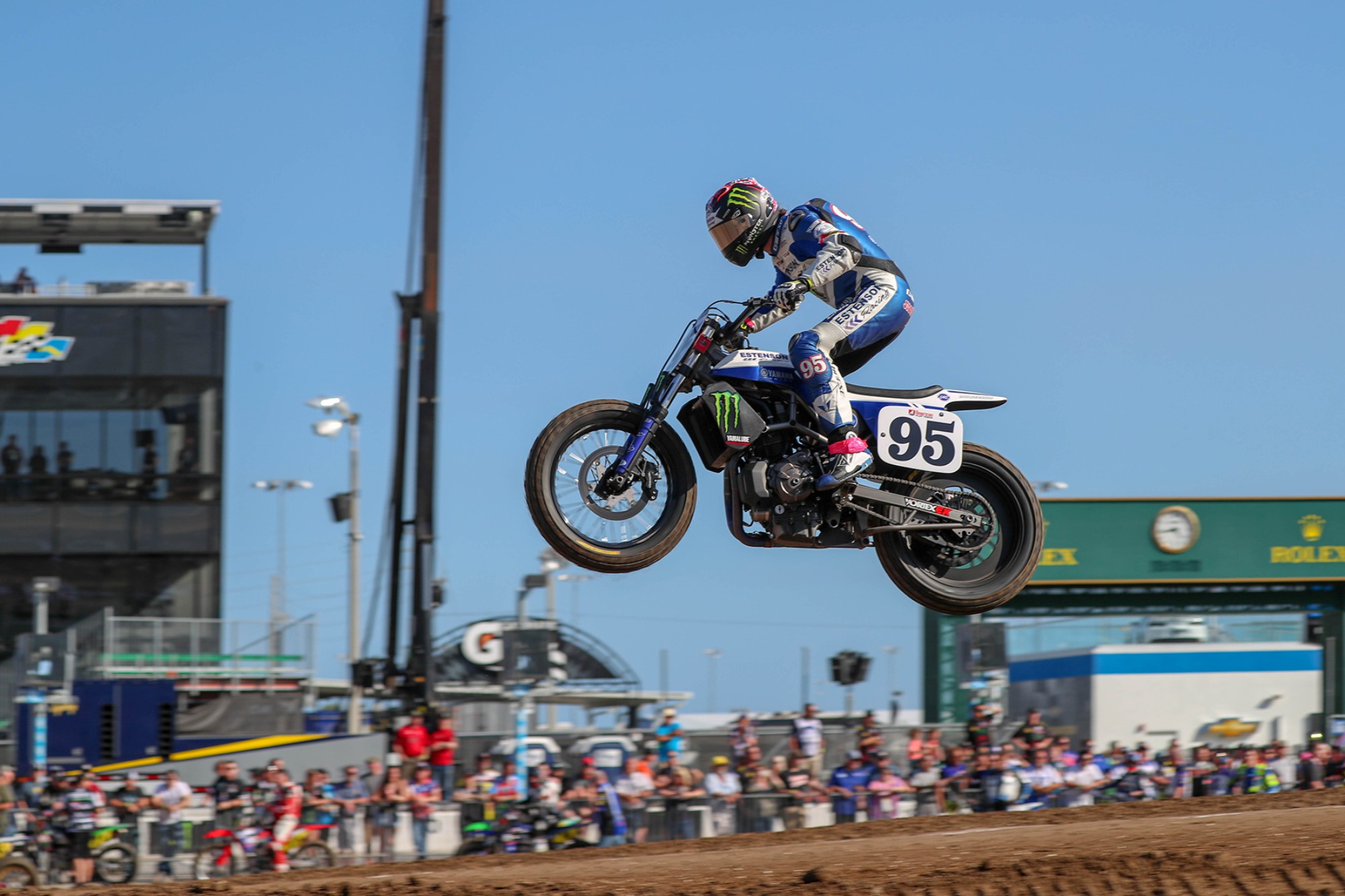 Johnson, Beach and Carlile Geared Up To Go TT Racing In Arizona

The all-new venue for American Flat Track was dubbed “Super TT” for a reason. With multiple jumps and a mix of right and left turns, it’s a TT track on steroids. A new racetrack brings a whole lot of unknown factors going into round four of the season, but that could play into Estenson Racing’s Twins team’s favor, especially since they are all quite comfortable on TT tracks.

Estenson Racing’s AFT Twins/Superbike rider Beach is also quite handy with right turns and jumps. Last year, as a part timer in the series, Beach finished second at the Daytona TT. He looked poised to challenge for the victory again this year, taking the win in his Heat, but unfortunately a mistake in the Semi had him sidelined for the rest of night. Beach looks to come back swinging on the Super TT.

The AFT Twins rookie on the team, Carlile, also had a good showing in Daytona. He was running a solid sixth-place until a technical issue ended his night early. Although disappointing, running up front with the sport’s best in his first outing was a big confidence boost for the 2017 AFT Singles champ. Carlile looks to pick up where he left off in Daytona and continue to make strides forward in the premier class.

“I’m excited for this one. One of the things that I thought about years ago was it would be cool to race on a trophy truck track. Well, here we go. We’re going to one. I know the track’s going to be a little different than what we tested, but it’s still going to be pretty wild. It’s a TT track, but it’s kind of going to be its own thing. Everybody thinks Peoria is the gnarliest TT, but I think this place is going to be triple that. I’m looking forward to it. TTs have been my strong point most of my career, and especially the past couple of years. So I’m looking forward to it and will try to gain some points back to get back up towards the front.”

“It will be great to race in Chandler, the team’s home race. Luckily it’s a track that usually we’re good at with some jumps and some right-handers, so I’m really looking forward to it. I think the stuff that we learned last weekend at the Texas Half-Mile will help us on the TT. We’re working hard each race to keep making progress.”

“I am really excited to get back to racing the premier Twins class and hopefully will pick up where I left off at the Daytona TT. We had a solid sixth going there but got cut a few laps short. Also it’s very cool to be racing in the shop’s backyard. I think we are going to be less than five miles from the shop, which is sweet. Overall I am hoping for a stellar weekend in AFT Twins and learning more about racing this bike and against these guys.”

Catch the race on NBCSN, May 12 at 3:00 p.m. ET. For tickets and additional information about the event: http://www.americanflattrack.com/events/ .

PHOENIX – Estenson Racing’s Ryan Wells is eager to get his 2019 American Flat Track AFT Singles season back on track at the team’s home race at Wild Horse Pass Motorsports Park, this Saturday, April 27.

Moving out here in the off-season to train and spend time with his new team, the New Yorker has now made the Phoenix area his home. So the home field advantage is an extra boost for Wells and his team who look to put the Estenson Racing Yamaha YZ450F up front at the first running of the Super TT.

The all-new venue is a completely different format than the series has ever raced at before. It looks to be the most challenging TT on schedule with multiple jumps, and right and left turns. Wells, who spent a lot of time training at the local moto tracks, looks forward to that challenge.

“I’m really excited for this weekend’s Super TT at Wild Horse Pass. It’s probably going to be a racetrack that’s unlike anything we’ve had in a long time. It’s going to allow riders to separate themselves on a technical level. I think if we keep our head on straight all day long and not try to get too ahead of ourselves, we can have a good chance at running up front.”

Catch the race on NBCSN, May 12 at 3:00 p.m. ET. For tickets and additional information about the event: http://www.americanflattrack.com/events/ .