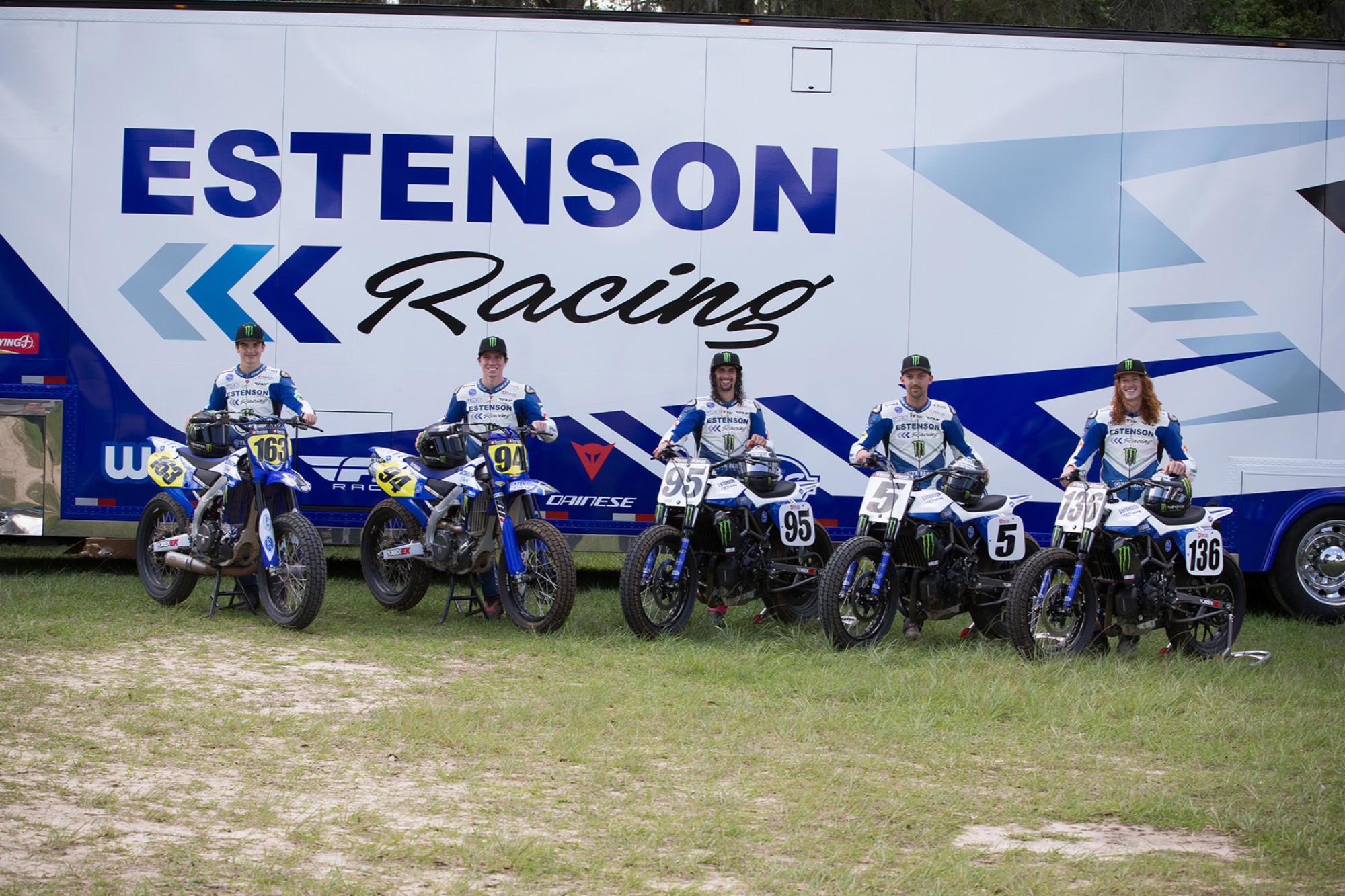 One of the most historic events on the American Flat Track schedule, Lima’s half-mile, pea-gravel cushion track always presents a formidable challenge. Veteran rider Johnson has had good finishes there before and looks to build on his podium finish at the previous round, the Laconia Short Track.

Beach hasn’t raced at the Allen County Fairgrounds in over five years, but the dirt track/road racer feels his riding has improved since then and also, he has had valuable seat time aboard his Estenson Racing MT-07 DT. He hopes to have a good showing in his return to Lima after the long hiatus.

As for their rookie teammate Carlile, he can’t wait to race the Lima Half-Mile. The 2017 AFT Singles champ has had a strong showing at the track, but unfortunately some bad luck with technical issues has rained on his parade. In addition to being amped up to race at one of his favorite tracks, Carlile is looking for some redemption and championship points.

“To be honest, Lima has never been my favorite place. I’ve had some good finishes there in the past, but it has always been the toughest track for me. This weekend will be the first time I get to ride the Yamaha on a true “cushion” track, so we’re going to have to work hard and find a good set up. Hopefully our momentum from the last round will keep rolling, so I can conquer my “Lima phobia,” and we can leave with a strong finish.”

“I’m really looking forward to getting back on the dirt track bike and racing at a track that has a lot of history behind it. The last time I raced at Lima was in 2013, and I definitely didn’t do that well. I’ve raced there twice on a twin. It used to be one track that I dreaded going to, but I think, since then, my riding has changed a lot. So this has been one of the races that I’ve looked forward to all season. I’m excited to get the bike on a track like this and see how it stacks up.”

“I’m absolutely chomping at the bit to go racing, and everyone in my circle can tell how excited I am. Lima is usually a great track for me, but the past two years, I’ve had some bad luck and been in position to win or on the podium only to have my bike suffer mechanical problems. So I’m hoping the third time is the charm this weekend. I changed up a lot of things in my program since the Red Mile, and I am excited to see how they work. I’m absolutely going into this weekend looking for the win; any other finishing position will not sit well with me.”

Catch the race on NBCSN, July 6 at 2:00 p.m. ET. For tickets and additional information about the event: http://www.americanflattrack.com/events/ .

Fresh off his first National win in the MotoAmerica Junior Cup class at Utah Motorsports Campus, Daniels is eager to kick off his career in American Flat Track. The 2018 AMA Athlete of the Year from Grand Championship events made history by being the first rider to earn the Nicky Hayden AMA Horizon Award in both flat track and road racing during the same calendar year. Daniels, who is a third-generation flat track racer, looks to score a top result at one of the sports most historic events..

Wells is also looking forward to the Lima Half-Mile, and the 2016 AFT Singles champ loves the pea-gravel cushion track at Allen County Fairgrounds . The New Yorker is looking to repeat his dominant victory during his championship-winning season and hopes to score his second victory in 2019 aboard the Estenson Racing Yamaha YZ450F.

“I cannot wait to get on track at Lima this weekend. This is, by far, my favorite race of the year, so I head there every year with high expectations. I won here in 2016 by a large margin, so I’m hoping to repeat that performance to get my second win of the season.”

“I’ve been waiting for this day my entire life, basically. It’s what I’ve worked so hard for and prepared for. Obviously, I’m very excited and ready to get going. I’m not really nervous or anything. I know I’ve got good equipment and a great team behind me with Estenson Racing. I think we can go in and do well.”