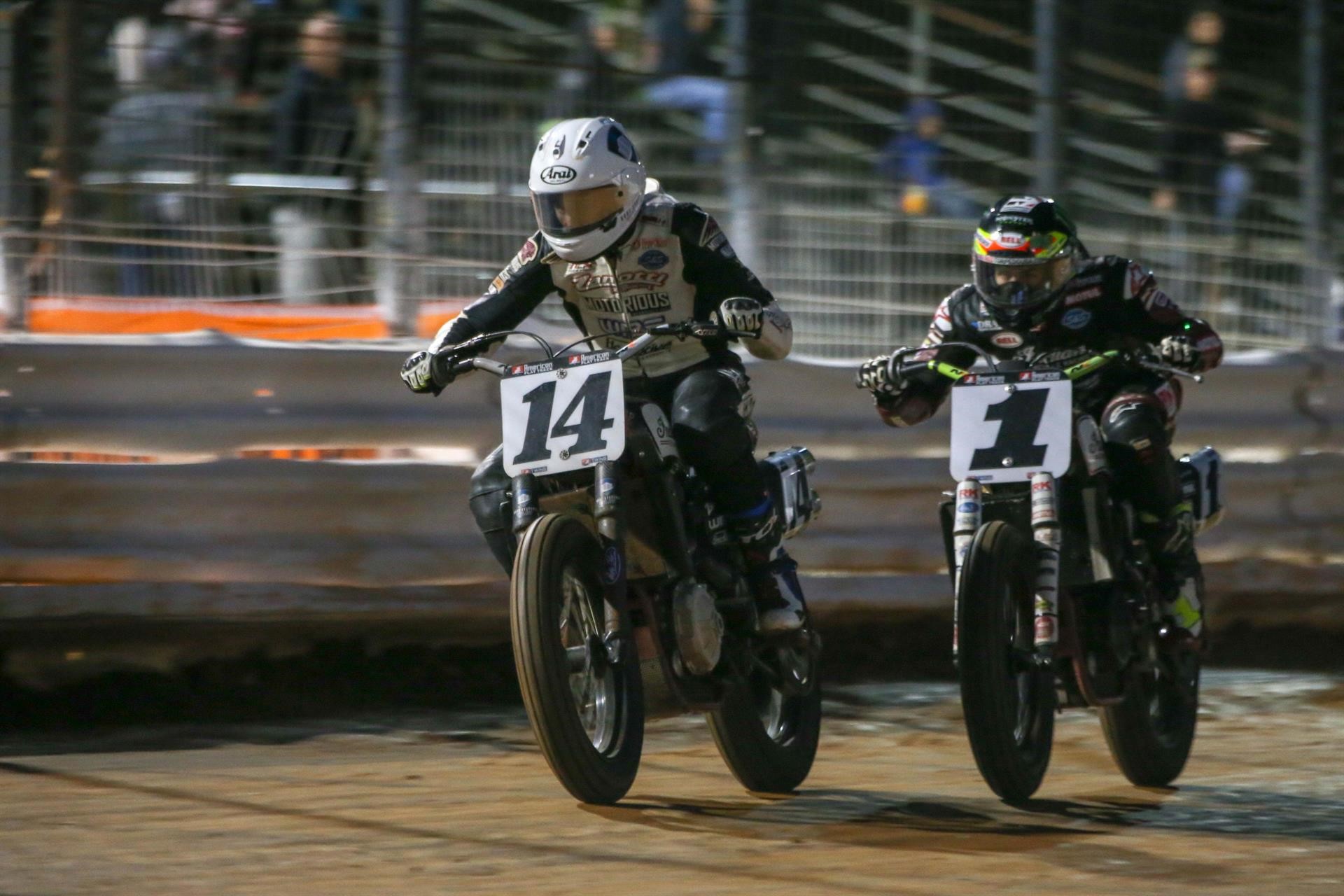 With the win, Briar became the final rider ranked in the championship’s top six to score a race victory on the 2018 American Flat Track season. While he may have had to wait his turn to stand on top of the box, Briar did so in decidedly spectacular fashion at Williams Grove Speedway. He went elbow-to-elbow with recently crowned 2018 AFT Twins champion Jared Mees (No. 1 Indian Motorcycle Rogers Racing SDI Scout FTR750) and gave better than he got, repeatedly railing around the outside of the series’ most dominant rider.

While Mees countered with some slick inside maneuvers of his own, Bauman finally made his move stick and looked all set to clear off… until a red flag spoiled his plans.

Predictably, Mees made the most of his second opportunity, snatching back the lead on the restart. Bauman was all too happy to repeat his first-half heroics, however, with several more criss-crossing overtakes to reclaim the point. At that point Bauman again proved capable of eeking out a gap and controlled the race as he powered to his first win of 2018.

“I felt better around the outside, but I had to take the inside a few times with Jared,” said Bauman after the race. “We got racy, and I was nervous some other guys were going to get in the mix, but luckily we were able to get away.

“I’ve had a lot of pressure lately,” Bauman continued. “I’ve been fast in qualifying and doing a lot of cool stuff, but I kept choking. We got the red flag, and I was really eager for this one. I really like this racetrack and I live here in Pennsylvania now. So, during the red I was pretty cool, calm, and collected. Jared gets such good starts, I knew he was going to jump me, and sure enough he did. But we were able to fight back. It was a long 16 laps after the restart.”

Just when Mees began to realize that Briar might be too much for him on this night, he found his hands full with a second Bauman. A motivated Bronson charged up behind Mees and ultimately overhauled him to steal away second. From there Bronson even threatened to make inroads on his big brother before finally taking the checkered flag in second, locking down his first-career premier class podium finish.

“It feels amazing,” Bronson said. “And finishing behind my brother makes it even more special. I’m still in awe about it. It is an unreal feeling.”

Mees carried on to finish third, notching his 14th podium in 16 races this season.

The AFT Singles action at Williams Grove Speedway may have belonged to Tanner Dean (No. 38 Waters Autobody/D&D Powersports KTM 450 SX-F) but the season is now officially owned by Dan Bromley (No. 62 KTM North America/Bromley Motorsports 450 SX-F), who did what he needed to do in order to secure the 2018 class crown.

Dean grabbed the holeshot and immediately put his head down to make a break. Shayna Texter (No. 52 Husqvarna Motorcycles/JCS Racing FC 450) gave chase and attempted to put a wheel in front of him to foil his escape, but Dean refused to back down. His pace eventually forced Texter into a couple of small mistakes, and that was all he needed to rip open an insurmountable lead, which he carried through to the checkered flag.

“I knew you needed the holeshot to win the race,” said Dean on the podium. “I just made my marks and led the whole race and came out with the win. It was very difficult. There were a few bumps here and there, but I found my way around them. I just kept my head down. I knew Shayna was right behind me. She ran a really good race. I felt a little pressured, but I knew if I just hit the right marks, I had it in the bag.”

The biggest honors of the evening, however, went to Bromley, who locked up the title with a safe and consistent ride. In order to clinch, all he had to do was beat 2016 champ Ryan Wells (No. 94 RMR/Al Lamb’s Dallas Honda CRF450) on the track, and he did that with ease.

Bromley got away in fifth, and after seeing Wells slide down the order to an eventual 15th-place finish, the KTM pilot continued on to take the flag in seventh. In doing so he scored the 2018 title a full two rounds early.

The lanky ace has been a contender week-in and week-out in a class that has seen 10 different winners in 16 races. Bromley has taken four of those wins himself to go along with his 11 total podiums.

“It’s definitely special,” Bromley said after the Main. “My whole family came out along with all my friends. It’s a great event, and it’s only about an hour-and-a-half away from my hometown. It’s amazing to come out here and win a championship in front of my home state. I’m not happy with my performance tonight but to be able to stand up here and hold this #1 plate is unmatched. I can’t thank everyone enough. Throughout the race, I knew if I was ahead of [Wells] I could do it. I kept peeking over here at the big screen that AFT so graciously supplied this race… I’m not sure what happened to Ryan today.”

For an in-depth Williams Grove Half-Mile experience with flag-to-flag coverage of both Main Events enhanced by drone and onboard footage, be sure to catch the NBC Sports feature telecast of the Harley-Davidson Williams Grove Half-Mile presented by Appalachian Harley-Davidson when it premieres on NBCSN on Sunday, September 23 at 5:00 pm ET (2:00 pm PT). Be sure to check your local listings, or for the complete broadcast schedule for AFT on NBCSN, please visit http://www.americanflattrack.com/events-nbcsn

American Flat Track will return to action for the penultimate round of the 2018 season, the Indian Motorcycle Minnesota Mile at Canterbury Park in Minneapolis, Minn., on Saturday, September 29. Live coverage can be viewed on FansChoice.tv starting at 2:00pm ET with Opening Ceremonies scheduled to get underway at 6:00pm ET. Tickets are on sale now and can be purchased at http://www.canterburypark.com/events/ama-racing/.