Track Survey Says AMA Pro Road Racing Likely To Have Six Or Seven Events In 2014, With Six On Television (Updated)

Track Survey Says AMA Pro Road Racing Likely To Have Six Or Seven Events In 2014, With Six On Television (Updated) 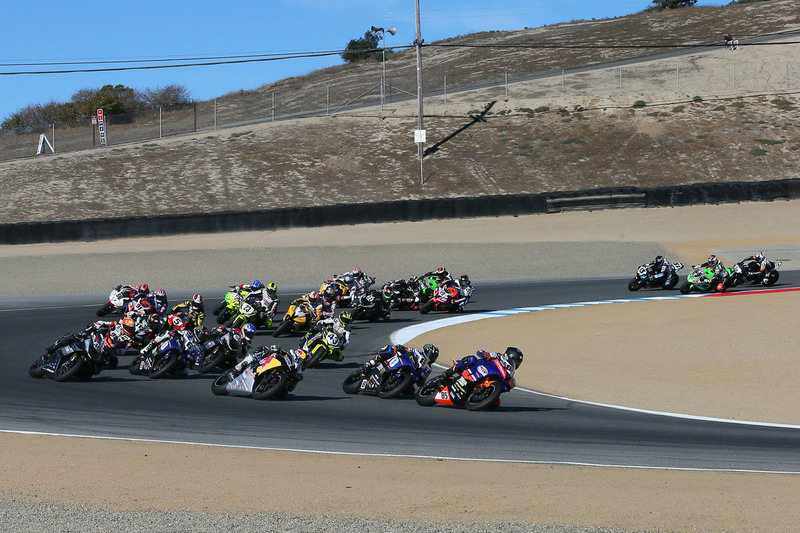 The GEICO Motorcycle AMA Pro Road Racing Series is likely to have a six-event or seven-event schedule in 2014 with six of those events being televised, according to a survey Roadracingworld.com has conducted of current, recent and potential AMA Pro Road Racing venues. The 2013 series included nine events, including six complete stand-alone events; two partial events, one held in conjuction with MotoGP in July at Mazda Raceway Laguna Seca (minus one class, Harley-Davidson) and one held in conjunction with World Superbike in September at Mazda Raceway Laguna Seca (minus one class, SuperSport); and one event for the Harley-Davidson class only, in conjunction with MotoGP at Indianapolis Motor Speedway. Of those events, seven were televised, with no TV for the Harley-Davidson event held in conjunction with MotoGP at Indy and no TV for the season finale in conjunction with World Superbike at Laguna Seca. The only 2014 AMA Pro Racing event that has actually been confirmed is scheduled for March 13-15 at Daytona International Speedway, which is owned by International Speedway Corporation (ISC). Jim France is the Chairman of ISC and is the majority partner in Daytona Motorsports Group, which owns and operates AMA Pro Racing. Officials with Barber Motorsports Park, Mid-Ohio Sports Car Course, Miller Motorsports Park, Road America and New Jersey Motorsports Park said plans to continue hosting AMA Pro Road Racing were in the works but that no deals had been finalized. On September 29th, Mazda Raceway Laguna Seca CEO/General Manager Gill Campbell told Roadracingworld.com that she had not even started talking to AMA Pro Racing officials about hosting the organization in 2014. Paul Kelly, Communications Manager for Indianapolis Motor Speedway (IMS) said the AMA Pro Harley-Davidson class may once again race in support of the Red Bull Indianapolis Grand Prix, but those plans are usually finalized later in the off-season. Asked about the potential of IMS hosting a stand-alone AMA Pro Road Race, Kelly said there were no plans to hold such an event. Officials with Auto Club Speedway, Homestead-Miami Speedway, Portland International Raceway (PIR), Road Atlanta and Sonoma Raceway said there were no ongoing discussions about hosting AMA Pro Road Races. PIR Track Manager Mark Wigginton told Roadracingworld.com that his track would love to host AMA Pro Road Racing and the track would make some modifications to the facility to better accommodate Pro-level competition. But Wigginton said that because PIR is owned by the City of Portland, an outside promoter–like M1 PowerSports–would have to promote the event. Wigginton added that he hadn’t spoken to representatives of AMA Pro Racing since the end of 2012. M1 PowerSports promoted three AMA Pro Road Races in 2012, but when a key investor bailed out the group was unable to promote any AMA Pro events in 2013. Officials with M1 PowerSports had not returned phone calls from Roadracingworld.com by post time. Officials from Circuit of The Americas, NOLA Motorsports Park and VIRginia International Raceway had not responded to Roadracingworld.com’s request for information on their 2014 event plans by post time. AMA Pro Racing Director of Communications Gene Crouch did not respond when Roadracingworld.com asked him–during the September 27-29 season Finale at Mazda Raceway Laguna Seca–about AMA Pro Racing’s 2014-season plans. By our count, that is one confirmed race date (at Daytona); maybes on five other stand-alone events (Barber Motorsports Park, Mid-Ohio Sports Car Course, Miller Motorsports Park, Road America and New Jersey Motorsports Park); and a maybe on the Harley-Davidson class supporting the Red Bull U.S. Grand Prix. In other words, six or seven events. Of those, six may have TV coverage, with the Harley-Davidson class event at Indy–if it happens–likely to not be televised. The Harley-Davidson event at Indy was not televised in 2013. Below is a rough sketch of how a potential GEICO Motorcycle 2014 AMA Pro Road Racing schedule might appear. March 13-15 Daytona International Speedway, Daytona Beach, FL May 30-June 1 Road America, Elkhart Lake, WI June TBA-TBA Barber Motorsports Park, Birmingham, AL July TBA-TBA Mid-Ohio Sports Car Course, Lexington, OH August TBA-TBA Miller Motorsports Park, Tooele, UT August 8-10 Indianapolis Motor Speedway, Indianapolis, IN* September TBA-TBA New Jersey Motorsports Park, Millville, NJ *Vance & Hines Harley-Davidson class only Updated: This just in from AMA Pro Racing Director of Communications Gene Crouch: “We are currently working with our promoter partners to finalize the sanction agreements for next year’s GEICO Motorcycle AMA Pro Road Racing events. We expect to have negotiations wrapped up in the coming weeks and will be releasing the 2014 schedule at that time, as we have done in previous seasons.”