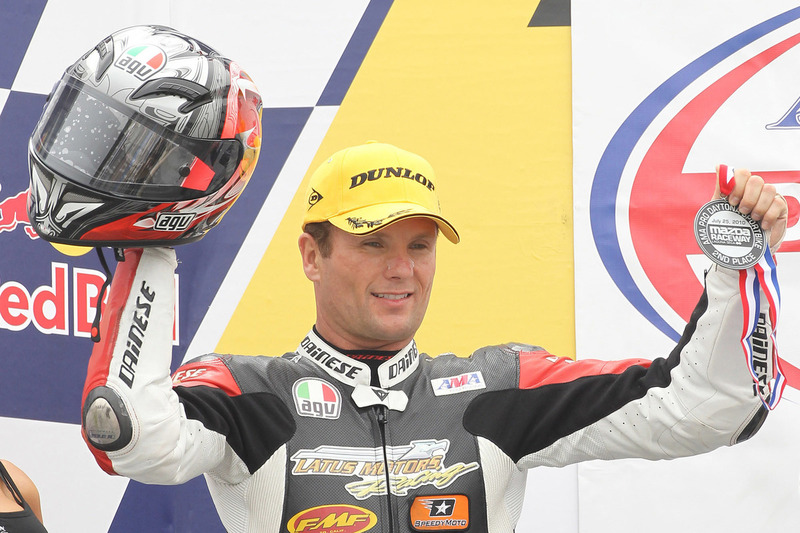 “I don’t have a solid update on Dane,” Chris Ulrich, owner of Chris Ulrich Racing LLC, which races as GEICO Motorcycle Road Racing, told Roadracingworld.com early Friday morning. “I know he’s still over at the hospital right now being held under observation. He might be there for most of the day today until the doctors deem he’s ready to get out. And there’s no way they’re going to clear him to race no matter whether he gets out this morning and makes practice in five minutes.

“So we had to do the unfortunate thing, the difficult part of this business, which is with our guy Dane Westby lying over there in the hospital we had to put someone else on his motorcycle. That’s never easy to do. It’s a really hard thing to do, to replace a guy who’s been in the family for a few years now.

“Unfortunately, the show does go on, and we have to have a GEICO-backed Honda motorcycle in the Daytona 200. For that job we looked around the paddock and saw who was available and who had a great attitude about it, who was ready, willing and able to come in and pinch hit in this situation. For that we chose Steve Rapp. He’s here, in leathers, he’s been riding, he’s a former Daytona 200 winner, we’ve seen him put a Superbike on the AMA Pro podium in the last 12 months and he’s got a great attitude. And on top of that he’s a former family member. He rode for Team Hammer back in 2003 and 2004. He’s a professional who is going to step in, and we look forward to him putting in a solid finish on the GEICO Honda CBR600RR.”

More, from a press release issued by Geiger Media on behalf of GEICO Motorcycle Road Racing:

Rapp to sub for injured GEICO rider Westby at Daytona 200

DAYTONA, Fla. (March 15) — More than two dozen riders crashed in the same spot of the backstretch chicane during Thursday practice for the Daytona 200 and GEICO rider Dane Westby arguably got the worst of it, injuring himself enough that he will not be medically cleared to participate in Saturday’s race. In his place will be veteran rider Steve Rapp, who climbs aboard the team’s primary Honda to fly the GEICO colors. “Everyone on the team is bummed that Dane got injured, no one more so than Dane himself,” team owner Chris Ulrich said. “His been working so hard to prepare for the season and this new start with GEICO and Honda. He was putting up great numbers before his crash and we all expected a good result for him in the 200.” “The main thing now for Dane is that he recovers quickly and gets back on the bike as soon as the doctors give him clearance to ride. We will definitely see him back on the bike at the next round.” A 41-year-old rider from Hawthorne, Calif., Rapp has been winning races on several different styles of bikes since turning pro in 1996. He’s a past winner of the Daytona 200, having won the Formula Xtreme race in 2007. “This is obviously a really big race for the GEICO Motorcycle AMA Pro Road Racing Series and for our team, as we continue our relationship with GEICO,” Ulrich said. “We had a meeting when we got the official word on Dane and decided to ask Steve if he would help us out. He kindly accepted and now we’ll put all of our support behind him. “Steve is a past winner of the Daytona 200 and has been on a Superbike podium in the past twelve months. He is a true professional and can certainly get the GEICO Motorcycle Honda to the finish in the Daytona 200. Hopefully, he can earn a podium spot. He’s a very capable rider.” The Daytona 200 begins at 1 p.m., Saturday, and will air on SPEED TV.