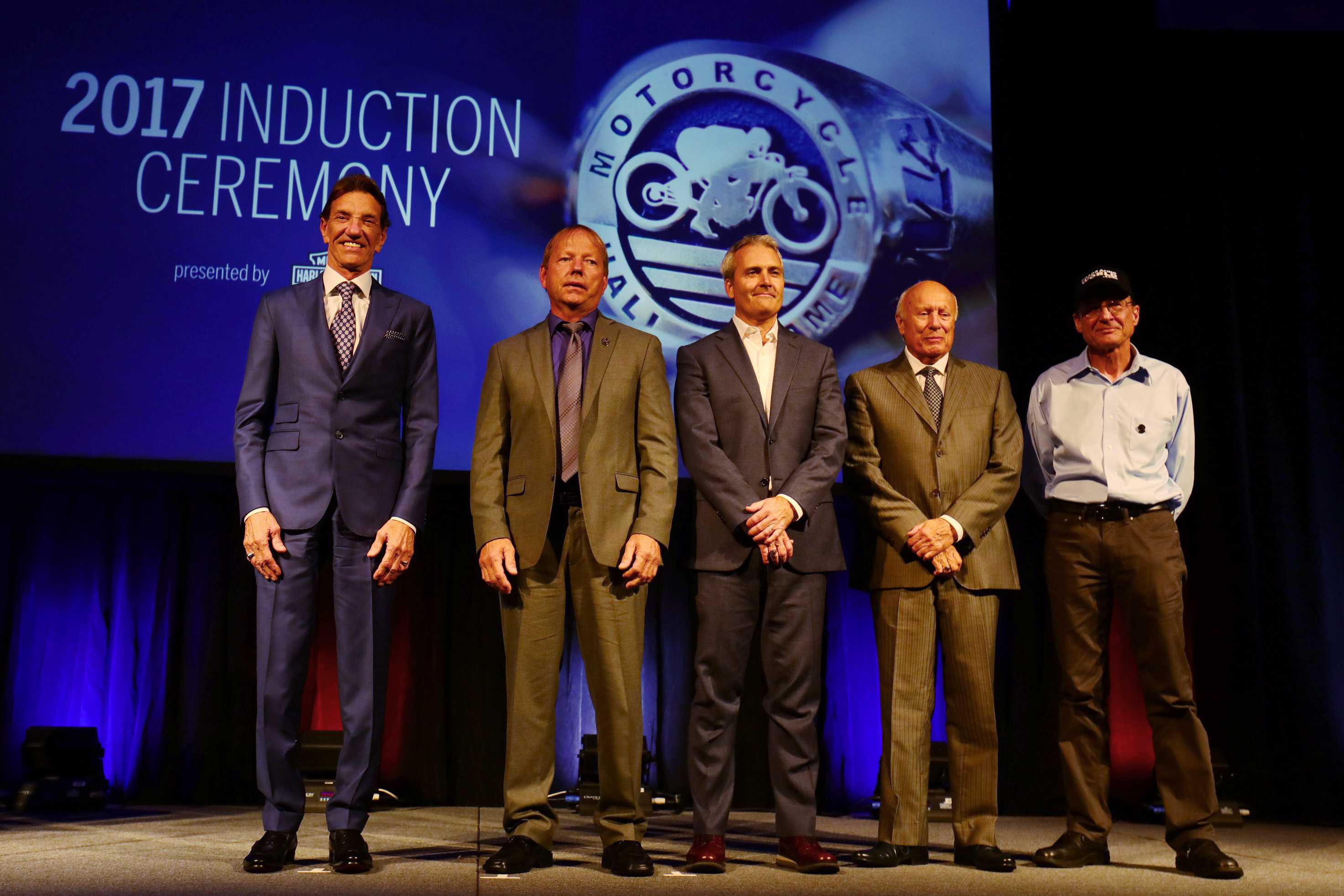 Bill Werner, the most successful flat-track tuner and mechanic of all time, was also honored as an AMA Motorcycle Hall of Fame Legend.

“As an everyday motorcyclist, I am forever humbled by the accomplishments of America’s motorcycling heroes and legends, and I am very grateful for the opportunity to stand before you tonight as we pay tribute to these motorcycling icons,” King said.

During the ceremony, those gathered also honored the memories of AMA Motorcycle Hall of Fame members who passed away during the past calendar year: John Parham, Joe Leonard, Skip Van Leeuwen and Bill Baird.

The induction ceremony followed the Hall of Fame Dinner, presented by Suzuki Motor of America. The ceremony featured videos highlighting the accomplishments of each inductee and the official presentation of their Hall of Fame rings.

John Ulrich
John Ulrich is a lifelong motorcyclist who has won races in five decades, co-founded and managed a racing team, founded and served as publisher of a motorcycle road racing magazine and started a charity to help keep track racers safe.

“I found something I love, and I stuck with it,” Ulrich said. “I met a girl who would put up with me, had kids and built a career, started businesses, put the kids to work. I had a life based on and built around motorcycles, motorcycle racing.”

Ulrich first competed in 1973. He won the 1983 and 1984 WERA National Endurance Championships and the 1996 WERA National Challenge Series 125cc Grand Prix Championship. He co-founded Team Hammer in 1980 and has led the team to numerous amateur and professional championships.

Ulrich is the founder and publisher of Roadracing World & Motorcycle Technology magazine, the leading periodical covering the sport of American road racing.

He founded and operates the Roadracing World Action Fund, a nonprofit that advocates track safety, promoting the use of soft barriers to prevent racetrack injuries and providing education on the value of adequate pre-race practice, rider training and proper racetrack preparation.

Ulrich served on the AMA Board of Directors for many years. In 2017, following his retirement from the board, he was presented the AMA Dud Perkins Lifetime Achievement Award, the highest award bestowed by the AMA board.

Peter Starr
Peter Starr is a motorcycle racer, TV producer and filmmaker whose work includes dozens of productions about motorcycles and motorcycling — bringing the message that motorcycles are fun, exciting, practical and liberating to countless riders and non-riders.

“Certainly I am not up here because of my racing prowess, as anyone who raced against me can attest,” Starr said. “But having raced internationally in the early 1960s did stand me in good stead for the part of my motorcycling career that brought me here tonight.

“In my book, Taking It To The Limit-20 years of Making Motorcycle Movies, I credited everyone I could remember who helped in the making of any of the 40-plus motorcycle films I made,” he continued. “For me it was a very exciting and satisfying part of my life, and I am grateful for being honored in this way.”

Born in Coventry, England in 1942, Starr started riding motorcycles at an early age and turned his love for bikes into a four-year stint working for Triumph in the early 1960s. He raced Ariels, Nortons and a Triumph T100.

After moving to the United States in the mid-1960s, Starr spent six years as a rock-and-roll DJ and two years as a record producer before turning back to motorcycles as a filmmaker. His first film, “Bad Rock,” was about the International Six Days Enduro qualifier in Oregon.

Starr’s most famous film was “Take it to the Limit,” which won Gold and Silver Awards at the Chicago and Houston International Film Festivals.

That year, the 22-year old was the overall champion of the AMA Hare Scrambles National Championship Series and the Grand National Cross Country Champion for the third straight season. He also was the top American at the 1982 ISDE when the United States team finished second in Czechoslovakia at what many consider one of the most difficult ISDEs of all time.

“They say the greatest honor is the respect of your peers, and for that I am grateful,” Lojak said.

After thanking the two uncles who started him off in motorcycling, Lojak added: “I share this award with you tonight.”

For his many accomplishments, the AMA also honored Lojak with the 1982 AMA Amateur Athlete of the Year Award. It was a career-defining moment, but Lojak was hardly done. He would go on to win two more overall championships in the AMA Hare Scrambles National Championship Series and an impressive six more GNCC titles.

No other rider has more than five overall motorcycle titles in the GNCC series, which also features ATV classes.

Don Emler Sr.
When Don Emler Sr. started racing motorcycles in 1967, he just wanted to make his bikes go faster than everyone else’s. But when his competition saw the difference between their bikes and Emler’s, they wanted to tap into that performance.

By 1973, Emler was spending more time on other racers’ bikes than he was on his own. So, he decided to plunge into the tuning business full time, launching the Flying Machine Factory in his Southern California shop.

“A special thanks to Tom White for instigating this award and to all of my friends along this great ride, all those that have worked with me, and, most importantly, thanks to my family,” Emler said. “This is a great event that keeps the nostalgia of the sport we all love.”

During FMF’s early years, the company focused on the Southern California motocross scene, as Emler strived to provide the best performance equipment for the area’s up-and-coming pro racers. His efforts quickly paid off, and FMF earned a reputation as the region’s top independent shop.

Under Emler’s guidance, FMF developed into one of the world’s leading off-road exhaust system manufacturers, and its chrome-plated two-stroke systems were increasingly common on America’s motocross tracks throughout the 1980s and 1990s.

FMF Racing supported the off-road racing market, building specially tuned exhaust systems for woods riding that were used by AMA Hall of Famers such as Rodney Smith and Randy Hawkins during their championship years.

Today, FMF is one of the premier motorcycle aftermarket exhaust suppliers in the world. Its brand is recognized by riders and racers alike who proudly display the company logo in events everywhere.

Emler remains active, as well. From the boardroom to the design table to the dyno, he has continued to find ways to coax a little more power from motorcycle engines through advanced exhaust systems and other accessories.

Bob Moore
From the time he was in his teens, Bob Moore had one goal in mind for his racing career: Win a world championship.

Moore started riding mini-bikes as a child, tossing his bike in the back of his father’s truck, going from track to track and racing. His father, once an amateur racer, owned a motorcycle trailer business, so Moore was always around bikes.

“He got me into the dirt,” Moore said. “We had some property, as well, so every day after school I would ride my (Honda) MR50 till dark.”

His perseverance and determination led to a highly successful mini-racing career. But when it came time to move up to a larger bike, Moore faced a challenge.

Moore’s dad told him he was too small to compete on a 125 and it was “time to give it up.”

“I don’t know if he said that as motivation or to get me to face reality,” Moore said. “But I said, ‘You know what? I’m going to show you.'”

In September 1984, Moore bought a 125 and began winning immediately. He turned pro and signed a $5,000 contract with Suzuki.

Moore won the 1985 AMA 125 West Coast Supercross Championship and decided it was time to head for Europe and chase a world title.

Then, in 1994, Moore achieved the goal he set so many years earlier: He won the FIM 125cc World Motocross Championship.

After retiring from racing, Moore stayed close to the sport by managing the FMF Honda motocross team and co-founding Road 2 Recovery, a charity created in 2000 to support injured AMA professional motocross and Supercross racers.

Hall of Fame Legend Bill Werner
In the AMA Grand National Championship paddock, Bill Werner is legendary. He’s considered to be the greatest flat-track tuner and mechanic of all time.

“A mechanic’s success is ultimately tied to the rider. I’ve worked with some of the best,” Werner said.

Werner, as a factory mechanic for Harley-Davidson, tuned motorcycles that carried Gary Scott, Jay Springsteen and Scott Parker to a total of 13 AMA Grand National Championships. When Springsteen set the record for all-time AMA national wins, it was Werner turning the wrenches. It was Werner who built Parker’s motorcycles when he later broke Springsteen’s mark. Werner is easily the winningest tuner in AMA Grand National racing history, with more than 150 wins to his credit.

Werner has garnered many honors over the years, including AMA Mechanic of the Year a remarkable 13 times, and he won the inaugural AMA Pro Racing Award of Mechanical Excellence in 1996. He was inducted into the AMA Motorcycle Hall of Fame in 2000.

Now, Werner can count among his accolades the status of AMA Motorcycle Hall of Fame Legend.

“People often ask me when I will finally retire,” Werner said. “I don’t have the answer to that yet. I’m currently working with Dave Zanotti and the Bauman brothers. We were the first non-Indian Motorcycles team to win a national this year. Initially, you get into racing for the sheer competition of it, but my participation now has more to do with the science of it. I’m more intrigued by the modifications and how they work in a racing environment. It’s kind of a science experiment that never ends.”